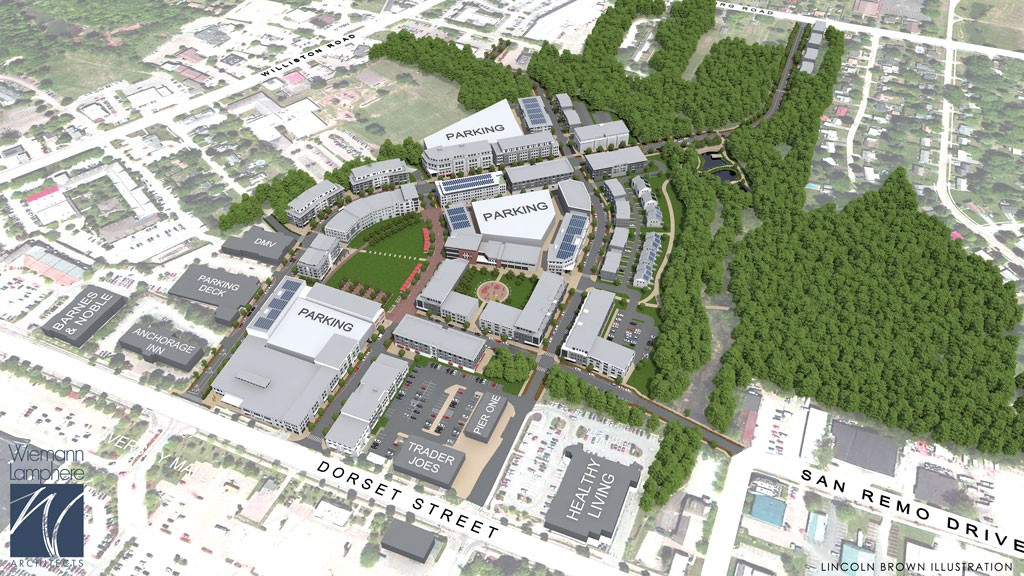 A swath of woods in the center of South Burlington could soon give way to something novel for the sprawling suburb: a real downtown. After 30 years of discussion, momentum is building around a proposal to develop a hub along the east side of Dorset Street, where people would live, stroll and shop.

Plans are in the works for a 300,000-square-foot mixed-used building on Market Street; work on roads and parks in the 106-acre downtown zone between Williston Road and Dorset Street is set to start in 2016; and a pivotal bond vote is expected this year that would provide crucial financing for the project.

But the proximity of Burlington's already-thriving historic downtown just a few miles away raises the question: Should South Burlington even bother?

Yes, say supporters, including former South Burlington city councilor Paul Engels. "We want to build an attraction," he said. "We want downtown South Burlington to be a place that people come to when they come to Vermont, just like Ben & Jerry's or Church Street."

University of Vermont assistant professor Abby Crocker likes the idea of a well-designed, pedestrian-oriented downtown that would strengthen South Burlington's identity. "We don't want to be the town that's overlooked all the time," she said.

When South Burlington broke off from Burlington 150 years ago, it left behind the historic center of the region and saw no need to create its own. Then as now, many residents of South Burlington headed to the Queen City to shop, dine and attend parades, concerts and speeches in City Hall Park.

As South Burlington shifted from rural outpost to suburb in the mid and late 20th century, strip development proliferated along its Williston Road and Shelburne Road arteries. The University Mall consumed South Burlington's core and attracted shoppers from around the region. Development followed the car-centric pattern that dominates many U.S. suburbs.

The concept of constructing a city center first came up in the 1970s, according to Paul Conner, South Burlington's director of planning and zoning. It became official in the city's 1985 comprehensive plan, which recommended that the burg "should investigate the establishment of a centrally located, multipurpose municipal center to serve as a focal point and to displace strip development." It also argued for "a Master Plan of the Dorset Street area and ... recommendations toward establishing a City Center."

Now the $300 million project might finally happen as financing and political backing coalesce. In recent years, the city council has repeatedly voted to affirm the downtown concept and, most critically, seek funding. The city has spent more than $1 million — much of it grant money — on planning.

Two years ago, South Burlington won state approval to create a tax-increment financing district for the City Center area, which will allow the city to use tax dollars from private development in the zone for infrastructure such as parking garages, sidewalks and street landscaping.

In March, the Vermont Economic Progress Council gave the project another big boost: It approved the city's final TIF financing plan and allowed that money to fund the construction of public buildings in the zone — a first in Vermont. "They agreed that a vibrant and successful downtown is one that has a public presence," said Conner.

The project could include a public library, ending the current arrangement whereby residents have to borrow books from South Burlington High School. Other ideas for the downtown include a recreation center and a new city hall.

Public buildings illustrate the difference between historic city and suburb. Burlington's city hall — with its marble stairways, fancy plasterwork and gold cupola — suggests a building of import where democratic ideals are showcased. By contrast, the South Burlington municipal building is an oddly shaped, no-frills affair located near the on-ramp to I-189.

"It looks a lot like a 1960s fallout shelter," Engels said. He'd like something more impressive at the proposed City Center.

Private developers would build most of the South Burlington downtown. If fully completed, the project could generate about $100 million in new tax revenue. Some $55 million would be harnessed to help pay for infrastructure, public buildings and possibly a bike-pedestrian bridge over Interstate 89.

Ultimately, it's up to voters, who will likely see multiple bond questions over the next 20 years if the downtown is to be fully built. "We're not going anywhere without voter approval, so we're going to have to convince people that we're doing the right thing," Engels said.

South Burlington is not the first suburb to try to design a downtown. Many communities have attempted New Urbanism and anti-sprawl development with mixed results. But it's still good to try, said James Howard Kunstler, the Saratoga Springs, N.Y.-based author of The Geography of Nowhere: The Rise and Decline of America's Man-Made Landscape. "Any attempt to create a coherent center is probably a good thing, depending on the design intelligence brought to the task," said the famously anti-car Kunstler.

What does Kunstler think of the 100-acre South Burlington plan? "A hundred acres seems like a lot unless you are unduly preoccupied with surface parking, which will not be a big feature of life in the future," said Kunstler. "You could fit most of the center of Florence, Italy, in 100 acres, so the public needs to be wary of grandiose schemes."

Another quibble: The renderings show multiple parking decks, which Kunstler said are a mistake. "I wouldn't spend a fucking dime on a parking garage," he said.

Zoning is another issue. South Burlington is considering adopting new building standards — called form-based code — that discourage box-store development. The approach, which is being considered in Burlington and other Vermont municipalities, emphasizes strict design standards that adhere to a specific aesthetic.

According to the current form-based code proposal, parts of the zone call for doors every 30 feet and the extensive use of glass on the ground floor — design specs that promote storefront appeal. "We want glass on the first floor and either offices or apartments above, to look like Burlington looks on Church Street," Engels said. "An old-fashioned city."

Private developers own most of the City Center land. The city owns the 7.65-acre Dumont Park and wants to revamp the space near wetlands and Hinesburg Road, possibly next year. The city also owns the land under Market Street, which winds from Dorset Street to Hinesburg Road and would undergo a $9.3 million reconstruction next year if voters OK the bond.

The largest single-property owner in the zone is South Burlington Realty, which has about 35 acres of prime real estate on both sides of Market Street. The company has a parcel under contract with Saxon Partners, a Hingham, Mass.-based developer that is vying to construct one of the first downtown buildings — a 300,000-square-foot structure with retail on the ground floor and residential above. Tim McKenzie of South Burlington Realty said the design would be consistent with the downtown vision.

"I think there's a lot of people in the city of South Burlington that would like to have a greater sense of identity, a greater sense of community," he said. "Kind of a downtown focal point where civic activities could happen, so instead of remaining a bedroom community to Burlington we'd have our own cultural, civic-type center."

The proposed form-based code allows buildings up to six stories tall. That's not a skyscraper, McKenzie notes, and he believes the end product would mesh well with its environment. "This is South Burlington, Vt.," McKenzie said. "It's not Boston or New York."

The city gathered public comments about the project, and responses vary. Some neighbors worry traffic will "fly" down new connector roads. Others want to make sure it has a city green, dedicated bike lanes and solar panels on roofs. Three-story height limits would be best, said one resident, while another wants at least one building to be tall enough to provide dramatic views of the surrounding landscape.

Another piece of the puzzle: One of South Burlington's three elementary schools sits on 11 acres of the City Center zone. Saxon Partners wants to buy the Rick Marcotte Central School property and build a 45,000-square-foot shopping center that would help fund the downtown-style building the company wants to erect on Market Street. The city and school district ar e exploring all the options: keep the school, shift the students to another building or construct a new school.

Abby Crocker, the UVM professor, who is also a parent, might support selling the school if she felt confident about both the replacement plan and the promise of a new downtown. She wouldn't want to lose the school for a big-box retailer or something like Maple Tree Place in Williston, which has downtown-style, multistory buildings but is surrounded by box stores.

"That's not a downtown," Crocker said.

Former city councilor Engels predicts that public support for the project will grow: "When people get onto the idea that it is not going to be just another suburban mall, that we really are serious about having a 21st-century city, I think they'll get on board."