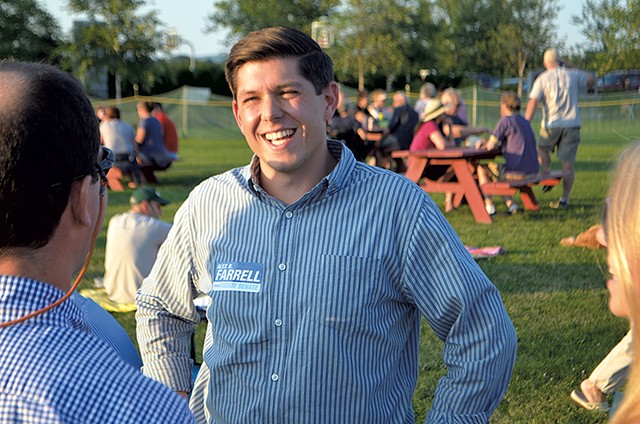 Alex Farrell moved easily through the beer-drinking, flip-flop-wearing crowd last Thursday in South Burlington. As people chatted or swayed to music at the SoBu Nite Out event in Veterans Memorial Park, Farrell, wearing creased dress pants and a sincere expression, pressed the flesh and struck up conversations with strangers.

"Tall? Long arms?" he asked Darcy Newman, recalling that he'd played baseball against her son in high school. "I hated hitting against him."

At just 25, Farrell wants to defy the odds and win a Vermont Senate seat in über-progressive Chittenden County — as a Republican.

Unseating any incumbent is a challenge. So is winning an election as a Republican in Burlington and its neighboring towns and cities. On primary day, county voters cast three times as many Democratic ballots as Republican ones. But Farrell's supporters hope his hustle on the campaign trail and a major fundraising advantage can turn the odds in his favor.

"He's a natural at this," said Rep. Kurt Wright (R-Burlington), a Farrell mentor and campaign supporter. Wright knows what it takes to win elections as a Republican in a Democratic stronghold. He's represented Burlington since 2001, winning nine straight races for his House seat. Wright is also a longtime Burlington city councilor and is currently the council president.

Aside from Farrell, two other Republicans are running: U.S. Air Force veteran Dana Maxfield and former state representative Paul Dame. To win, Farrell needs to place sixth or better. He captured 252 more votes than Maxfield in the primary and also bested Dame, who was a write-in candidate.

Farrell has been hard at work this summer. As of August 15, he had raised $28,770 in campaign cash, filings show — nearly as much as the six incumbents combined, and five times what Maxfield raised.

Of the incumbents, Pearson has raised the most: $8,371. In the 2016 race, Pearson got fewer votes than any other winner. Ditto this year's primary. Despite the close calls, Pearson remains confident that voters want politicians like him in the Statehouse.

"I think it's pretty clear that the values of Chittenden County are not reflected in the Republican platform," he said. "There's a full-scale rejection of [President Donald] Trump and his politics, so I just look at those data points."

Even though Farrell may be a long shot, the state's most prominent Republicans are supporting the young candidate. Both Gov. Phil Scott and former governor Jim Douglas attended Farrell's May 24 campaign launch. Scott said he liked what he heard from the rookie Republican's friends and family.

"I think it's essential for the party to bring new youth with new ideas, fresh perspective to the platform," Scott said, noting the aging demographics of the state. He was impressed seeing so many young supporters at Farrell's kickoff "getting engaged, just being part of his team."

Farrell grew up in Shelburne, the fourth of five kids. His passion for baseball overshadowed other pursuits. "I played from the time I could walk," he said. Farrell's teammate's elected him captain of his varsity team at Champlain Valley Union High School.

"I was funny," he said. "At least on those teams, I was someone that everyone got along with pretty well, so it just worked out."

His successes in baseball didn't carry into the classroom.

"I hated school when I was a kid," Farrell said. "Mostly because I hated being told that I had to be interested in something."

Farrell didn't have the grades to get into the University of Vermont, so he pursued the school's Guaranteed Admission Program, which allows students to take college courses during a probationary year. Farrell excelled and was admitted. He discovered real-world value in his college courses.

"You get to choose what you're going to study and find your passion," Farrell said.

As his college years came to a close, Farrell got politically involved. He approached the Burlington City Council in 2015 to apply for a post on the city's Board for Registration of Voters, which helps keep the voter rolls current.

Wright recognized Farrell, the son of his old friend Tom, when he appeared before the council.

"I sat down and talked with him, and I helped him get on the board of voter registration, and we started talking about politics," Wright said. "And we shared a lot of the same types of views."

The aspiring politician graduated in 2015 with a finance degree and a political science minor. He shares an apartment with a roommate in Burlington's New North End and works as a data analyst for Union Mutual insurance company in Montpelier.

Wright brought Farrell to meetings of the Burlington Republican Party, and he became a member. Farrell developed GOP connections with help from Wright and another friend, Jeff Bartley, who was then the state GOP's executive director. (Bartley, who is now Farrell's campaign manager, no longer works for the state party.) Last year, Farrell served a short stint as the chair of the Burlington Republican Party.

"I definitely thought he was kidding at first," Farrell said, "but it quickly was clear that he actually thought I should do it. I wasn't convinced off the bat that it was a worthwhile pursuit until we bounced it off people that know a lot more about this than I do."

Farrell launched his campaign at Halvorson's Upstreet Café in Burlington. He released a 30-second campaign ad in which he introduces himself while standing on his childhood baseball field, explaining his roots in Chittenden County.

A team of volunteers helps Farrell stay visible on the campaign trail. His campaign has posted pictures on social media of Farrell listening intently to constituents and attending a Vermont Lake Monsters baseball game with Scott.

Most first-time candidates shoot for municipal office or the Vermont House, but Wright said the skill set doesn't differ too much between the House and Senate.

"Is there a learning curve?" Wright asked. "Sure, but there is for everybody that gets in the legislature."

Farrell is trying to leverage his youth by making young Vermonters — specifically, the lack of them — a central campaign issue. He's seen friends and family members leave the state to pursue opportunities elsewhere.

"I don't think this means a complete overhaul of Act 250," he said, referring to the state law that governs large-scale development. "What it could be is just building into Act 250 some acknowledgement of the potential job creation of projects and just taking that into account when we're streamlining these things."

As a socially moderate-to-liberal candidate who is fiscally conservative, Farrell could do well, Wright believes.

"We know that Trump is not popular in Vermont, for sure," Wright said. "It's a tough time for Republicans generally, but ... what's appealing about Alex is, he is a different kind of candidate for Republicans."

Farrell supports the state's new gun-control laws but says no more are needed. He's not opposed to a taxed-and-regulated marijuana market but says the state needs to ensure highway safety before moving forward — a position Gov. Scott shares. He's criticized his incumbent opponents for supporting a surcharge on hotel rooms to pay for clean-water improvements. Instead, Farrell wants to fund those efforts with a per-parcel fee on landowners.

Farrell said multiple advisers suggested that he run as a Democrat. He didn't seriously consider it.

Ryan Nakhleh, a childhood friend of Farrell's, said he didn't even know of Farrell's political leanings until his buddy took over as Burlington GOP chair.

The party's reputation carries a "negative connotation" for many Vermont voters, Nakhleh said, but Farrell doesn't play into that stereotype.

"He's someone that will have a rational head on his shoulders. You can talk to him. He will listen, and you can actually have a rational conversation with him," said Nakhleh, a self-described liberal.

"Alex was just born with, like, a quiet peacefulness to him," said his oldest sister, Meaghan Wonderly. "There's no other way to explain it."

Wonderly said politics weren't a big part of life in the Farrell household, but she wasn't surprised her brother followed his instincts.

"I think he would have made things a lot easier on himself, obviously, if he had chosen to run as a Democrat," she said. "I'm impressed by his ability to decide on his own, as opposed to taking the easier route."

Farrell can be evasive about his thoughts on Trump and national politics, but he has not embraced Washington, D.C.-style partisanship. He calls his opponents smart, dedicated people who take a very different approach to governing, and he rarely brings up party politics.

Farrell said he wrote in a candidate for president in 2016 and didn't vote for Hillary Clinton or Trump. He sees merit in some of Trump's policy decisions, such as recent changes to the federal tax code. Farrell said the corporate tax cuts in the new law were "a good approach."

Whether that approach works remains to be seen. Diane Snelling, the daughter of former Republican governor Richard Snelling and the Republican to most recently represent Chittenden County in the Senate — from 2002 through 2016 — called Farrell's campaign "ambitious."

Perhaps not winnable, she said, but the kind of campaign that provides a young candidate invaluable experience.

"I'm sure at some point, if not this election, soon he will succeed," Snelling said.