Can Rain Barrels Save Lake Champlain? No, But Some Say It's a Start | Environment | Seven Days | Vermont's Independent Voice

Can Rain Barrels Save Lake Champlain? No, But Some Say It's a Start 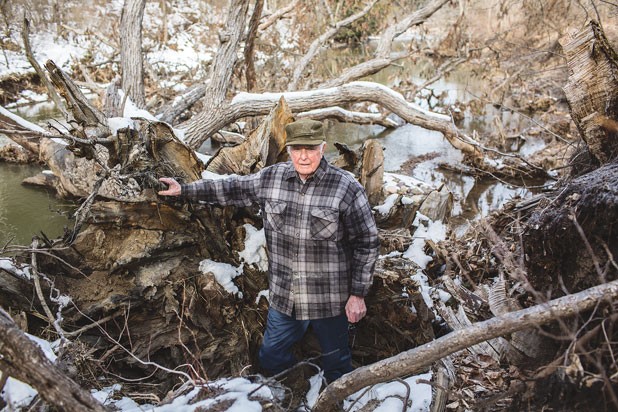 Forget bears and cows: This summer, brightly painted rain barrels will line Church and College streets in downtown Burlington. Part public art display and part educational campaign, the 20 barrels — each decorated by a different local artist — are meant to encourage homeowners to collect pollutant-laden storm water before it rushes too fast into rivers and Lake Champlain.

The project is being funded by a $40,000 grant from the ECOS Project, a nonprofit whose tagline is “a sustainable future for Chittenden County,” that was awarded to a coalition that includes the Winooski Natural Resources Conservation District, ECHO Lake Aquarium and Science Center, the Church Street Marketplace and ArtsRiot.

Rain barrels might seem like an entirely uncontroversial thing, but they are touching off debate — more than a month before their May debut — about how best to control runoff, especially from urban developments. No one thinks rain barrels alone will solve the lake’s pollution problem, but organizers hope the display will educate the public about simple ways they can help.

Skeptics like Jim Kleptz, a Shelburne farmer who owns LaPlatte River Angus, say the amount of water collected by the barrels is a drop in the bucket — literally and figuratively — that could actually discourage the public from tackling bigger solutions to water pollution. Kleptz says he was “riled up” after receiving a recent mailing about financial incentives for homeowners who install rain barrels and rain gardens.

“There is the mentality that, if we do something, it’s going to be better than it was. Something is better than nothing,” Kleptz says. “And that attitude is what’s got us where we are now.”

“Where we are now,” in Kleptz’s view, is perhaps best illustrated by an enormous white oak that until recently stood along the banks of the LaPlatte River in a field where he cuts hay for his beef herd. He guesses the tree was 150 years old — too wide for a man to wrap his arms around. Last year, the oak toppled into the river, and today it is dead and gnarled as the river runs around it.

Kleptz blames the tree’s demise on increased storm water runoff from development. A resident of Shelburne since 1971, he’s watched farm fields give way to suburban developments in which houses are “packed in there like cord wood.”

Increased storm water runoff is bad news for local streams and for the watersheds they feed. When water rushes along impervious surfaces, streams become “flashier” during storms, causing a whole host of problems: erosion, increased pollutant and nutrient loads, and heightened water temperatures, among other concerns.

A retired systems engineer who worked nearly three decades for General Electric, Kleptz took an early interest in water quality after moving to Vermont. He’s made it a pet project in recent years, piping up at Shelburne planning and zoning meetings and generating applause with his remarks at conferences on the health of Lake Champlain.

The root cause of storm water problems, Kleptz explains, is anything that diminishes the “storage capacity” that’s built in to most natural, undeveloped land. When a homeowner or developer constructs impervious surfaces — like a roof, garage and driveway — they’re removing opportunities for water to naturally soak into the soil, where it can be released slowly over time. Kleptz has crunched the numbers and, by his calculations, a 1500-square-foot house — with a garage, driveway and stretch of paved road in front of the home — eliminates some 13,000 gallons of water storage capacity from the landscape.

Farmers contribute to the problem too, says Kleptz, by planting row crops, such as corn, that strip organic content from soil that would otherwise soak up water.

“The solution is, you have to put the storage back in the system,” says Kleptz. And a rain barrel — which collects in the neighborhood of 55 gallons of water at a time — doesn’t come close. What’s more, Kleptz worries that small-scale improvements to divert storm water leave homeowners feeling complacent and “mentally content that their property is not contributing to pollution.”

Kleptz isn’t against rain barrels and believes that most homeowners who use them are genuinely concerned about the state of water quality in Vermont. However, he bristles at the notion of using grant funding or taxpayer dollars to pay for them.

“They’re chewing up the lumber around the nail, but not hitting the nail on the head,” says Kleptz. He believes Vermont needs big fixes that will require spending money, moving earth and re-imagining development.

Some Vermont towns are doing the big things. South Burlington spent $1 million last year on large-scale storm water improvements. More such projects are in the works, including an overhauled retention pond serving six condominium complexes and one single-family home development along Hayes Avenue, off Route 116. The original pond no longer meets current standards for storm water treatment, and runoff from the developments is going untreated into Potash Brook.

“I think there is progress, and we just haven’t done the best job of letting people know,” says Tom DiPietro, South Burlington’s deputy director for Public Works. Even so, he warns that South Burlington residents need to brace themselves for what’s coming. “We’re going to have to spend millions of dollars over the next 20 years for some of these large-scale projects,” he says.

Other cities and towns are exploring innovative techniques, too. Burlington has experimented with “silva cells,” underground soil cells that store more water. Other towns use routine maintenance — like street sweeping — to keep road sand and dirt out of streams and culverts. And at Burlington International Airport, privately held Heritage Aviation has installed a green roof, a cistern and engineered landscaping such as swails and dry detention beds to capture rainwater before it rushes into a nearby impaired stream. Such fixes require both money and forward-thinking developers.

Smaller-scale efforts have made a dent, too. The Winooski Natural Resources Conservation District is working in collaboration with the Lake Champlain Sea Grant on a program called “Let It Rain” that provides money for homeowners to install rain barrels, rain gardens, cisterns, green roofs, permeable pavers or other “green architecture.”

Lake advocates and storm water experts agree that Kleptz’s analysis about water storage is sound. Asked about the most “innovative” approaches to managing runoff, Jim Pease, an environmental scientist with the Vermont Agency of Natural Resources’ watershed management division, says, “It’s called low-impact development.” In the long run, Pease says, working with native soils to absorb water is one of the most effective solutions to runoff. And, he says, it can actually be cheaper in the long run for developers to choose “green” infrastructure.

What role do homeowners — and rain barrels — play in all of this?

“When you get hundreds and thousands of people [making changes], it adds up,” says Ross Saxton, the director of conservation and education at Lake Champlain International.

The problem is that most people aren’t chipping in — “not yet,” Saxton says. Given the annual hand-wringing over closed beaches, algae blooms and water quality in Lake Champlain, he doesn’t know why that’s the case. Ultimately he believes it boils down to one-on-one conversations: knocking on doors and talking to people about what they can do.

“That might not be the most cost-efficient way, but it’s the most effective,” says Saxton.

Regarding the cost, Saxton says he’s sympathetic to people like Kleptz who object to public money paying for rain barrels, rain gardens and the like. “I think it’ll get some people educated, but I don’t think it’s going to motivate many people to adopt pollution-prevention features on their own property,” says Saxton. “It’s a step … but I think the funds could be spent better, and in other places.”

Rebecca Tharp, district manager for the Winooski Conservation District, admits that rain barrels can’t offset a residence’s entire storm water runoff; a half-inch rainstorm will send somewhere in the neighborhood of 600 gallons of water sheeting off a roof — far more than a 55-gallon rain barrel can absorb. But she’s also confident that rain barrels are a good “first step” for homeowners to take and hopes this summer’s display gets more people talking — and acting — at home.

“It can be this non-threatening way to get involved and start taking responsibility for some of the deleterious effects our development is having on the lake,” says Tharp. “It’s really about a paradigm shift … Our infrastructure has been built on the idea of getting water into a pipe and away from buildings as fast as possible, and we’re only now realizing that has significant consequences to our environment.”