Can I Get an Amend? Vermont Legislature to Consider Abortion, Slavery and Equal Rights Amendments 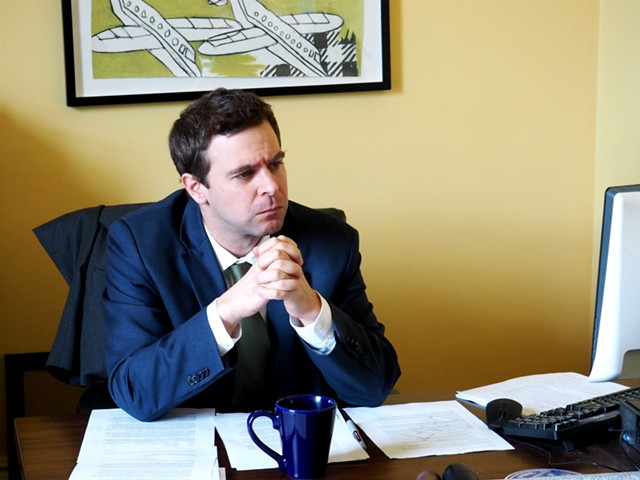 Vermont's constitution is the shortest in the nation — and one of the most difficult to amend. But state legislative leaders say they're determined to enshrine a series of new progressive protections in the document, and they plan to start this winter.

According to Senate President Pro Tempore Tim Ashe (D/P-Chittenden), his members are poised to push three constitutional amendments next session: protecting access to abortions, guaranteeing equal rights to several specified groups, and removing references to slavery from the constitution.

"They are Senate priorities, and we will vote on them," Ashe asserted.

The pro tem also plans to advocate for an amendment that would lengthen gubernatorial terms from two years to four, though he conceded that the Senate is more divided on this matter than the others.

None of these changes could happen overnight. Any amendment would have to clear the Vermont Senate by a two-thirds majority and the House by a simple majority this biennium. Then, after the 2020 elections, it would have to pass both bodies once again. Only then would it go to voters for ratification in the 2022 election.

"Vermont's founders and those who succeeded them understood the difference between statutory law and constitutional law," said historian and retired state archivist Gregory Sanford. Before "tinkering" with the latter, he noted, they thought it essential to "allow enough time for a full, public discussion and decision making."

The amendment process laid out in the constitution of 1793 has itself been tinkered with twice: first, in 1870, to eliminate a Council of Censors that once approved constitutional changes and then, in 1974, to allow senators to propose amendments every four years, not just every 10 years.

Since the current process took effect more than four decades ago, senators have proposed 94 amendments, according to the Secretary of State's Office, but only six have been ratified. The most recent, approved in 2010, allows 17-year-olds to vote in primary elections if they will turn 18 before the general election.

The current crop of proposals promises to be quite a bit more controversial, but advocates say they are necessary in the age of President Donald Trump. The elevation of Brett Kavanaugh to the U.S. Supreme Court in October was the impetus for an abortion-rights amendment, according to Planned Parenthood of Northern New England lobbyist Lucy Leriche.

Though Kavanaugh called Roe v. Wade an "important precedent" during his confirmation hearings — and, on Monday, voted with the court's liberal faction against taking up two abortion-related cases — his record on the federal bench suggests he's inclined to chip away at that precedent.

"We are in a position right now where abortion rights could be overturned or severely eroded by the U.S. Supreme Court," Leriche said. "It would be thrown back to the states."

Though the Vermont Supreme Court overturned a law banning doctors from performing abortions in 1972 — just months before Roe was decided — there are no affirmative statutory protections for the procedure.

"Our goal here is to make sure that what people have access to now stays in place," said House Majority Leader Jill Krowinski (D-Burlington). "I think we need to put it on the books."

Since it would take at least four years to enact a constitutional amendment, House leaders plan to introduce parallel legislation that would, in the interim, guarantee abortion rights in state law.

Mary Hahn Beerworth, executive director of the Vermont Right to Life Committee, finds the pair of proposals "jaw-dropping" and plans to fight them with everything she's got. "The Democrats just take out the wish list from Planned Parenthood and get it done," she said, noting that Krowinski used to work for the organization. (Leriche, for what it's worth, once held Krowinski's job as majority leader.)

Democrats may have an unexpected ally as they push for the measures. Though Planned Parenthood's political committee spent roughly $450,000 opposing Republican Gov. Phil Scott in the 2016 election, he has since only strengthened his support for abortion rights. The gov scored 20 out of 20 in Planned Parenthood's 2018 endorsement survey, in which he committed to backing "legislation that would guarantee full, unrestricted abortion rights into state law."

In fact, according to Scott spokesperson Rebecca Kelley, the governor supports — at least, in concept — all four constitutional amendments Ashe hopes to enact.

Even Beerworth concedes that abortion-rights supporters have "a pretty clear path to victory" in the legislature, which is likely also true of the equal-rights and slavery-removal amendments. But disputes over the details — which, in the case of the abortion proposal, haven't yet been settled — have been known to derail past amendment attempts. Whenever the four-year gubernatorial term comes up, for example, legislators tend to squabble over whether it should apply to other state offices, as well.

The second proposal up for consideration, a broadened version of the failed federal Equal Rights Amendment of the 1970s, would guarantee equal protection under the law to all Vermonters, regardless of race, sex, age, religion, familial status, disability, sexual orientation, gender identity or national origin.

"I think we're all aware of the disturbing activities going on at the federal level that really are undermining many people's individual liberties," said Sen. Ginny Lyons (D-Chittenden), who plans to propose the amendment. "I think that our state very much values equal rights for each of those groups and classes."

Lyons said she would like to merge the abortion-rights amendment into her own, though that does not appear to be a done deal.

The third proposal, advanced by the Racial Justice Reform Coalition, would strike references to slavery from Article 1 of the constitution. "It's kind of an egregious oversight that we haven't done it sooner," said Sen. Debbie Ingram (D-Chittenden), the amendment's lead sponsor. "We just really need to get it out of there."

It's difficult to imagine too many Vermonters opposing the idea, but at least one constitutional scholar thinks the legislature should proceed with caution.

Moreover, Teachout argues, the brief reference to slavery wasn't countenancing the practice. It was making clear that restrictions on indentured servitude also applied to those who had been enslaved. "I think if you talk to any legal historian, they'll say that was clearly the intent," he said.

If legislators really want to modernize the constitution, they have their work cut out for them, Teachout said. He recommends scrolling down the page and taking a gander at Article 3. It states that "every sect or denomination of christians ought to observe the sabbath or Lord's day, and keep up some sort of religious worship, which to them shall seem most agreeable to the revealed will of God."

"I would say, 'Hey, why not get rid of that phrase, anyway?'" Teachout suggested. "It wouldn't do any harm."

As former state senator Matt Dunne was ramping up his campaign for governor in May 2016, he pledged that he would not self-fund it and called on his Democratic rivals to do the same. Months later, on the eve of the August primary, Dunne broke his pledge and personally loaned his campaign $95,000. That's on top of the $4,000 he had directly contributed.

In the more than two years since he lost the primary, Dunne has apparently been trying to dig himself out of the hole, according to a filing last month with the Secretary of State's Office. And according to one state election official, he appears to have been doing so illegally.

The recent disclosure shows that, from December 2016 through May 2018, Dunne's campaign raised $33,167, even though he was no longer a candidate. The campaign used $21,000 of that to pay Dunne back for the loan, a few thousand dollars at a time.

That, according to state Director of Elections and Campaign Finance Will Senning, is perfectly legit. What's not is that half of the new money came from donors who had already given Dunne the maximum allowable contribution of $4,000 in the 2016 election cycle. The relevant statute is unambiguous: "[C]ontributions used to retire a debt of a previous campaign shall be attributed to the earlier campaign."

According to a Seven Days analysis, seven of Dunne's recent donors have now contributed more than $4,000 before and after the 2016 campaign. The excess contributions totaled $17,515.

Among the double-dippers were several of the former Google manager's Silicon Valley supporters: LinkedIn cofounder Reid Hoffman and his wife, Michelle Yee; Google executive and Middlebury College trustee Suzanne Reider; and Google lobbyist John Burchett. (Hoffman also personally bought hundreds of thousands of dollars' worth of television advertisements on Dunne's behalf in the waning weeks of the 2016 primary.)

Dunne did not respond to multiple requests for an interview. His former campaign manager, Nick Charyk, called Seven Days to say that he was told by the Secretary of State's Office in December 2016 that the practice was kosher.

"We need to understand exactly what [the statute] means, but of course we'll work with the Secretary of State's Office to adhere not only to the spirit but to the letter of the law," Charyk said. "And if that requires some changes, that, of course, will happen."

It's unclear whether the state will take action of its own. A spokesperson for Attorney General T.J. Donovan, whose office is charged with enforcing campaign finance laws, said the AG could not immediately comment on the situation.

One Dunne donor reached this week, former New Hampshire state senator and Dunne in-law Peter Burling, said he would do what it takes to comply with the law. Burling donated $4,000 to Dunne during the 2016 campaign and then another $2,500 in May 2018 to retire the debt. That's $2,500 too much.

"It is incredibly hard to watch people who aren't millionaires put themselves out [there], seek an opportunity for public service — and Matt has so much to offer," Burling said, explaining his decision to double-donate. "How could I say no?"

Yet another Chittenden County weekly newspaper is up for sale. This time, it's the Williston Observer. The price tag? $350,000.

"We decided to put it out there and sort of see what happens," said copublisher Marianne Apfelbaum, who bought the paper with her husband, Paul Apfelbaum, in 1994. While the two "still love doing the paper," Marianne said, they're hoping to focus on a separate events-and-marketing business. To that end, the Apfelbaums have also put their Vermont Maturity Magazine up for sale, for a mere $95,000.

In the past two years, the owners of the Shelburne News, the Citizen of Charlotte and Hinesburg, and the Other Paper of South Burlington all sold their respective papers. The buyer in each case was the Stowe Reporter group, which already owned papers in Stowe, Waterbury and Morrisville.

So will they snap up the Observer, too? "Wow, didn't know they were actively pursuing a sale at this time," Stowe Reporter group publisher Gregory Popa wrote in an email. "Interesting."

John Walters will be back next week.