Can Couples Get Closer Through Bodywork? 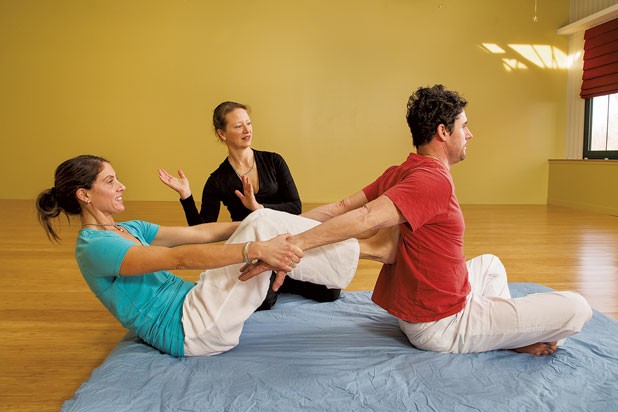 On a Saturday afternoon in Shelburne, my husband, Carlton, and I are tangled up on a tapestry-covered futon, but not for an “afternoon delight.” For one thing, we’re fully clothed — albeit stripped down to T-shirts and workout pants in the 75-degree room at Yoga Roots. And we’re not alone. Practitioner Kristin Borquist is on her knees, instructing my husband on how to “stir my femur in my pelvic socket.”

Gulp. We’re working our way through a couples’ coaching class in Thai bodywork, which Borquist has described to me as a “potent, kind, sometimes silly, sometimes serious and surprisingly informative way to connect with a partner.” Having experienced Thai bodywork with her in the past, I was curious to learn about the couples twist.

My husband and I are both avid athletes, but after 10-plus years of marriage and two young kids, we rarely get a chance to slow down. So, I asked him, why not try a different kind of togetherness? I tossed out suggestions for couples’ facials at Stoweflake Mountain Resort & Spa and couples’ quartz treatments at Cynthea’s Spa in Burlington. Carlton was most intrigued when I pitched him this two-hour session of “Thai massage.”

Borquist’s bodywork is no disrobe-and-relax-into-la-la-land massage. It’s a workout for each of us as we take turns learning the sequences. “Palming the feet” helps begin the relaxation process, while single-leg traction releases the neck and shoulders. The “femur stirring” is part of a hip rotation. “Collarbones wide” feels like I am trying to spread Carlton’s wings by reaching under his (very broad) shoulder blades. A chest-opening move involves placing Carlton’s feet just under my scapula.

Funny? Yes. But the more we talk to and learn from Borquist, the more we discover how Thai bodywork can be the foundation of a happy marriage.

Carving out time from busy schedules is as simple as “learning how to stretch out together after a ski or bike or hike,” explains Borquist (speaking our athletes’ language), “or [to] unwind from a stressful day.” Thai bodywork can also be as tantalizingly complex as finding “new ways to expand intimacy.”

Besides doing bodywork with individuals and community classes, Borquist has moonlighted as a wedding official and writer of custom ceremonies; both those experiences inspired her to create Couples Thai Coaching. She’ll officially launch the workshops on Valentine’s Day, and will make house calls to help couples initiate a home-based practice. Since it can be hard to remember positions in the, uh, heat of the moment, Borquist writes down sequences and even videotapes sessions for partners.

“Ten minutes and it will change everything,” Borquist promises us after Carlton remarks that he feels better blood flow already. “Your athletic performance will go up, and your stress level will go down.”

Indeed, after learning a few simple movements — including “hand palming” and “ear magic” — with Borquist’s gentle guidance, Carlton and I leave feeling more connected, and committed to trying Thai bodywork at home.

OK, so he’s been traveling for work every day since, and we’re about to embark on our next adventure — camping and skiing at Stowe’s Stone Hut. But after that, for sure, we’ll be ready to try our new Thai twist.

The original print version of this article was headlined "Body Double"

Couple’s Facials, Stoweflake Mountain Resort & Spa, Stowe: Private couples’ suites with soaking tubs and fireplaces set the scene for the side-by-side therapies offered here. Couples can take an aromatherapy bath by the flickering flame before tandem massages in the “couple’s retreat,” or opt for hot-rock therapy. But for pairs who’ve been worried about winter’s wear and tear on their skin, the 50- or 80-minute facials are the ticket.

Hot Rose Quartz Crystal Side-by-Side Massage, Cynthea’s Spa, Burlington: Even the strongest of marriages can have messed-up meridians and chakras, right? So say hello to this hot-stone massage with a twist: Instead of the typical basalt rocks, therapists use hot rose quartz crystals that purportedly stimulate those meridians and chakras to dissipate energetic blockages. The Burlington day spa also offers more traditional treatments for two, including Swedish and deep-tissue massage, all done in a private couples’ suite.

Cupid 5K, Shelburne: This brand-new race offers romance along with heart-pumping pavement pounding. Singles who are “looking” wear a red bandana to signify their solo relationship status and start five minutes after the taken trotters (“not looking”), who wear white bandanas. The out-and-back course starts at Shelburne’s Field House and ends with cups of hot chocolate and dollar-per-minute massages that benefit the Leukemia and Lymphoma Society.

Couples Yoga for Labor and Birth, Evolution Physical Therapy & Yoga, Burlington: First comes love, then comes marriage, and you know what comes next. But the baby needs help being birthed, which is why Susan Cline Lucey — a mom of three and a doula who has helped with more than 70 births — created this two-hour workshop tailored for expectant twosomes. Think breath work, labor positions and pain-relieving tips, alongside yoga movements and massage. “I have great perspective on all types of birth, all types of support, and how to make couples comfortable with working together,” says Cline Lucey, who’s been offering the class for nearly eight years.

Meanwhile, those who aren’t expecting — and even those who are completely unattached — can still celebrate love with shavasana, chocolate and more during Evolution’s special Valentine’s Day Yoga session offered by Christine Holt.