Can Burlington Reform Its Employee Retirement System -and Not Spark an Exodus of Workers? | News | Seven Days | Vermont's Independent Voice

Can Burlington Reform Its Employee Retirement System -and Not Spark an Exodus of Workers? 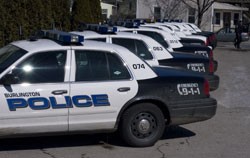 No one in Burlington City Hall was surprised when Police Chief Tom Tremblay retired in January after 25 years with the Burlington Police Department. After all, as cops often say about the stress and long hours of police work, “It’s not the years that get you, it’s the miles.”

But Tremblay’s decision to immediately start drawing his pension even before he’s really “retired” highlights what many city officials say is a fundamental flaw in Burlington’s retirement system: It rewards workers who leave early and penalizes those who put off their retirement or delay taking their pensions until they’ve left the workforce entirely. As Public Works Director Steve Goodkind puts it, “The system is supposed to be a retirement system, not a ‘second-job’ system, or a ‘leave-us-and-take-your-skills-elsewhere’ system.”

No one is suggesting that Tremblay did anything improper or unethical. Only that his pension — which is likely to be a high percentage of his former $94,000 salary — combined with his new wages amounts to a tidy sum. Not surprisingly, such career moves are now the norm across all city departments as long-term employees approach retirement eligibility. About a year before Tremblay’s departure, former Deputy Chief Stephen Wark left the Burlington Police Department after 20 years and took a job as director of consumer affairs and public information at the Vermont Department of Public Service.

“If you look at all the retirements in the last five years, there isn’t one retiree who’s postponed taking the benefit,” notes Jonathan Leopold, Burlington’s chief administrative officer. “And, most of the ones I know of are also still working, which means that that money is being taxed and they’re not living on it. That’s not the way a retirement system is supposed to work.”

The problem isn’t just that Burlington is losing seasoned public servants at the peak of their careers. It’s also that the retirement fund is woefully underfunded to meet its financial obligations to current and future pensioners. The fund, which once boasted a 20 percent surplus, swung to a 20 percent deficit in less than six years.

The city has known about the shortfall for some time, and last year the mayor appointed a special task force to examine the problem. Its report, released in August, called the fund’s rapid reversal of fortunes “dramatic and serious.” Leopold, who chaired the task force, says the system is “unsustainable. . . and I think there’s a growing consensus that the sooner we deal with this, the better.”

How did Burlington get into this mess? Depends on whom you ask. Some point a finger at the administration of former Mayor Peter Clavelle. Others suggest it was a combination of factors, including the irrational exuberance of the dot-com era, the attacks of 9/11 and bad advice from the city’s former investment managers at Morgan Stanley.

What is clear is that the picture was much rosier in 2000. That year, the city determined that its retirement assets, which peaked an all-time high of $126 million, were sufficient to increase employees’ benefits, allowing more personnel to retire early and thus “spend down” the surplus without taxpayers taking a hit. Even in the midst of a 14-year bull market, Leopold suggests that the city should have planned for the market’s inevitable ebb and not assumed “that the market was going to be going up forever.”

Admittedly, no one foresaw the precipitous market declines that followed 9/11. Within a short period of time, Burlington’s retirement fund plummeted to an all-time low of $78 million, erasing the surplus entirely and leading to the current deficit. As a result, the retirement system needed an infusion of cash, paid for with substantial property tax increases starting in fiscal year 2004.

Had the city not raised taxes, Leopold says, it would have had a negative effect on its bond rating and, in turn, its ability to borrow money. (Just last week, Treasurer Jeb Spaulding accused the governor of also inadequately funding the state’s retirement fund by about $2.1 million.)

City Councilor Andy Montroll (D–­Ward 6) says that one of the more “troubling aspects” of Burlington’s current predicament is that the problem was apparent shortly after the retirement system was altered in 2000. According to Montroll, then-city Treasurer Brendan Kelleher wrote a memo to the file in 2001 acknowledging that the recent benefits changes weren’t sustainable. “To my knowledge,” Montroll adds, “none of us [on city council] were aware of that at the time.”

Montroll is concerned that the growing risk to taxpayers wasn’t adequately considered. The only way city council can raise taxes without voter approval is when the retirement fund needs more money, as it did from 2004 through 2007. In fact, according to Leopold, taxpayer contributions to the employee retirement system went from less than $1 million in 2000 to roughly $5 million last year. The employee retirement system now accounts for more than one-fifth of all non-school property taxes.

“In a way, what we’ve said is, ‘Invest the funds however you’re going to do it. Be as aggressive as you want and don’t worry whether or not it loses money because it if does, the taxpayers are going to cover you,’” Montroll says. “That’s basically the way the system works, and that’s wrong.”

Today, no one disputes the need for fixing the shortfall. However, proposing changes is easier said than done. To even broach the subject causes anger and unease among many city employees, who legitimately fear losing their hard-earned benefits. A lot of them are choosing to jump ship.

Nowhere is that risk moreapparent than at the Burlington Police Department where, according to Chief Mike Schirling, “We’ve lost people already just to the discussion.”

Burlington’s police force, which has a capacity of 100 officers, is already down eight officers, not including the two to four who are deployed in the military at any given time, and the seven officers who are now eligible to retire. Also, while the department recently hired five new officers, the ramp-up time for getting them through the academy and on the streets is at least 35 weeks.

Moreover, Schirling says, the need to modify the retirement system coincides with one of the most challenging law-enforcement recruiting climates ever. Due to demographic and attitudinal shifts across the country, he says, a dwindling number of young people are going into law enforcement. The growing demand for police, security and military personnel at all levels of the private and public sectors only complicates the matter; tellingly, the FBI, for the first time in its history, is now advertising vacant positions. Meanwhile, some law enforcement agencies around the country are offering $10,000 signing bonuses to lure officers away from other departments.

“Any substantial alteration to the retirement system now will cause an exodus of between 20 and 30 percent of the sworn workforce within three months,” Schirling predicts. “It will be impossible for us to hire. We will not be competitive.”

And the problem isn’t confined to the public-safety sector. The Burlington Electric Department has also seen “four or five key people” leave in the last six months, according to General Manager Barbara Grimes — again, due to fears over more changes to the retirement system. A proposal discussed with the union, Grimes says, “made some of my folks very angry. The last months of negotiating our contract were very difficult.”

Since BED and its workers’ union, IBEW Local 300, reached a settlement last month, the impact of the retirement issue appears to have “sugared off,” Grimes says. However, the next round of contract talks could begin as early as December. And, it’s clear from both labor and management that the retirement fund could become a bone of contention again.

“It’s unfortunate that we keep fighting the same battles,” says Sylvia Rabidoux, co-chief steward with IBEW Local 300 and a 35-year veteran with Burlington Electric. Rabidoux is also a member of the city employees retirement committee, which was formed to give union and nonunion city workers a voice in these discussions. She says the committee recently made a number of recommendations to the city, including the issuance of a low-interest, pension obligation bond to get the fund back to where it’s supposed to be.

“The employees have worked hard on this,” Rabidoux adds. “And we need to make sure they’re taken care of as well as the taxpayers and ratepayers.”

The picture isn’t all bleak. In October 2006, the city fired its performance manager at Morgan Stanley and switched to an independent manager whose fiduciary duty is to the city of Burlington, not a brokerage firm’s shareholders. Then, in November 2007, the city contracted with the Vermont Pension Investment Committee (VPIC) to have the state manage its retirement fund. With more than $3 billion in combined assets, Burlington now gets the benefit of a higher class of fund managers, and saves between $300,000 and $400,000 annually in management fees, according to Leopold.

Nevertheless, more changes are likely if the city expects to reverse the fund’s downward trend. Leopold won’t comment on what those changes might be, as discussions with the city’s unions are still underway. Nor can he say how much worse the situation is this year, with recent declines in global markets. “I haven’t seen the mid-quarter report yet,” he says, “but it’s not gonna be pretty.”

Finally, it seems clear that more changes will be needed to make it more advantageous for city workers to either postpone retirement or put off taking their benefits immediately, while not causing scores of them to leave prematurely. Montroll says that could mean new employees are treated differently than existing ones, or that the city shifts from a “defined benefits plan,” where employees know exactly what they’ll get when they retire, to a “defined contribution plan,” similar to a 401-K plan. Needless to say, the latter would be a tough sell in today’s investment climate.

But Leopold sounds more optimistic. “I think that we can end up with a better benefit for employees . . . that would cost less than what we have now,” he says. “The system should be set up so that the longer you postpone it, the better your benefit is. That’s better for the employee, and it’s better for the city.”