If Burlington developer Eric Farrell was nervous before an Act 250 preliminary hearing on July 10, he didn't show it.

The 70-year-old stood on a new rooftop veranda built atop the former Roman Catholic Diocese of Burlington orphanage on North Avenue, wearing one of his signature floral button-down shirts. He chatted easily with the three members of the commission that would decide the fate of the largest housing development in Burlington history.

"Should have brought some wine," the affable Farrell joked, as he touted the view of Lake Champlain and the Adirondack Mountains from Liberty House, the 65-unit apartment complex that now occupies the historic building. Renters started moving in on July 1.

Sure enough, once the hearing began later that morning in one of the vacant fifth-floor apartments, all the signs seemed to favor Farrell.

Only a handful of citizens turned out to oppose the development, a far cry from the outrage that slowed the project during local permitting in 2015. Three individuals and one group requested recognition by the commission to be able to participate in the process and, potentially, to appeal the final decision. They voiced concerns about traffic, stormwater runoff and environmental degradation.

But there was no defiance of the sort the Burlington Town Center redevelopment plan engendered. In that case, members of the Coalition for a Livable City packed meeting after meeting and held public protests to assert that the 14-story project was out of scale with Burlington. A lawsuit to block the project was settled just two weeks ago, clearing the way for the tall mall.

The Act 250 process is the final hurdle for Farrell's Cambrian Rise, a 739-unit development on the lakefront property most recently owned by Burlington College.

District 4 Act 250 environmental commission chair Tom Little said he expected the hearings, which will begin in August, to last no more than a few weeks. Farrell encouraged the expediency, noting that he wants to begin the first phase of construction this fall.

The development wouldn't be happening at all if Burlington College were still in business. In 2014, the school, mired in debt, announced plans to sell much of its 33 acres to Farrell for about $7.5 million.

An opposition group, Save Open Space-Burlington, sprang up in response. In January 2015, 200 people, including environmentalists and Abenaki drummers, protested the building plan at Burlington City Hall.

Concerned citizens reached out to Gil Livingston, the president of the Vermont Land Trust. Livingston helped to bring Farrell, Mayor Miro Weinberger, and the nonprofit housing organizations Champlain Housing Trust and Cathedral Square together for negotiations.

Livingston said he persuaded Farrell to take a six-month "time-out" to listen to community concerns. Farrell participated in many public meetings and met with individuals, too.

One of them was Dee Bright Star, a Vermonter of Abenaki heritage who spoke out against the project at city hall. Farrell visited Bright Star twice at her Shelburne home and invited her to spend a day "purging" the orphanage, where many young children were abused.

"He didn't have to do that," Bright Star said of Farrell, adding that she was resigned, but not satisfied, with the end result.

Meanwhile, Livingston and the other parties hashed out a deal: The VLT and the city would buy 12 acres along the water, including Texaco Beach, for a public park; and CHT and the senior-housing developer Cathedral Square would each construct one of the development's 12 buildings, providing 146 units of affordable housing.

In the end, the city council unanimously supported the plan to build on 21.6 acres. The project would have 739 units: 240 condos, 353 rentals and the 146 affordable units. The plan includes an additional 42-room hotel.

"I drive my architects crazy," said Farrell, noting that he sends late-night emails on the hotel, suggesting furniture styles and pump soap dispensers for the showers. 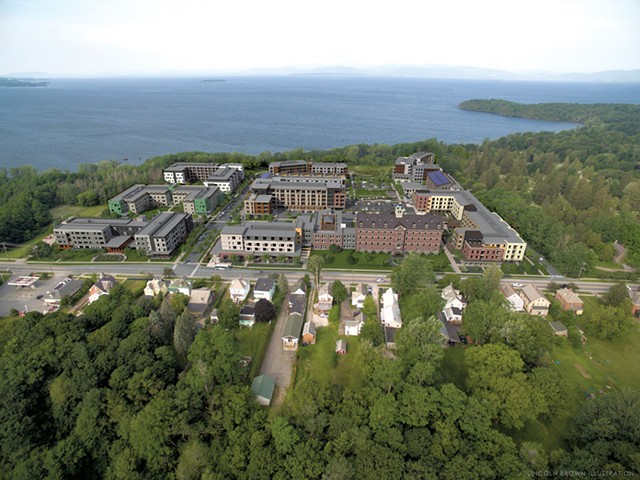 The July 1 opening of Liberty House marked the first phase of the development; because the structure already existed, the apartment complex didn't require Act 250 approval.

Farrell calls the units inside "the best of the best" — and they are priced accordingly. Though they tend to be small — one studio apartment has just 280 square feet — monthly rents range from $925 to $1,900.

Farrell conducts tours of Liberty House with relish, showing off everything from bike-washing equipment and high-ceilinged studios to the bathroom tile and closet space. The tours end on the fifth floor with what he calls the "million-dollar view" from the sunset veranda.

"If you have any relatives in Dannemora over there, you can wave to them," he said, gesturing toward the New York prison town across the lake. Thirty-one of the Liberty House units had been leased as of last week, and Farrell said he expected to fill the remainder by September 1.

On July 12, Farrell moved one step closer to securing the final six-acre parcel abutting Liberty House — the land that Burlington College didn't sell him. People's United Bank, the sole bidder, bought the foreclosed land at a public auction for $3.1 million. Farrell said the purchase would allow him in turn to buy the essential parcel from the bank this fall.

"Eric deserves credit" for brokering and managing such a complicated deal, according to Michael Monte, chief financial and operating officer for the CHT. "There's nothing small going on here. It's a large risk and a lot of moving parts."

Born and raised in Burlington, Farrell started working in real estate in 1970, right after earning a degree in business from Saint Michael's College. He started Colchester-based Farrell Real Estate in 1975 and estimates he's built about 800 units over four decades. The Cambrian Rise project — his most ambitious to date — would nearly double that total.

He attributes the lack of strong, organized opposition to the "merits of the project." Cambrian Rise is "an inclusive neighborhood," he said matter-of-factly. "What about it is controversial?"

Yet some people are still raising questions. Opponents maintain that the city and Farrell "railroaded the project through" the process, said Philip Pezeshki, a former member of Save Open Space who was one of a handful of people at the Act 250 hearing.

In May, local engineer AJ Rossman, who owns a home across North Avenue from the property, decided to take action. He was concerned that the project had undergone only "token public engagement," and he didn't have the time to locate and decipher city permits and regulatory documents.

He hired Erik Sievert, a grad student at the University of Vermont, as a "civic organizer" to found Cambrian Watch, an umbrella organization to investigate the process and educate citizens. More than half of the citizens present last week said they wouldn't have known about the hearings if Sievert hadn't posted a notice on Front Porch Forum.

"For me, the question is ... is the scale appropriate, and can a sensitive environmental ecosystem take that burden?" Rossman said. It's "truly to just allow the public to participate in a complex process that's known well by the developers but not by those who are affected."

Cambrian Watch was the sole group seeking party status before the Act 250 commission last week. Farrell said he opposed it, and commission chair Little also questioned whether the organization, which has no official members, should be allowed to participate. In response, Cambrian Watch downgraded its request to "Friend of the Commission" status, which cannot appeal a final decision.

Two of the three individuals who also applied for party status made their cases via email, which Little read aloud at the meeting. One came from Sharon McSweeney, who has lived across North Avenue from the property since 1993. In an interview two days later, she said she is worried about the traffic associated with the development because her kids walk to school. She's also concerned about impacts on stormwater — and whether the project would increase her property value, and thus her taxes.

"I'm not totally against it," she said. "I'm just making sure it's not going to be really heavy on us."

She also suggested that the project would destroy the social fabric of the neighborhood. "I'm not going to borrow a cup of sugar over there," she said.

City Councilor Dave Hartnett (D-North District) said he hadn't heard any complaints about the project from his constituents but also indicated that he has focused his energy recently on the controversial North Avenue bike lanes. "I haven't really been paying attention," he acknowledged.

Several former members of Save Open Space said they hadn't attended the Act 250 preliminary hearing because they weren't aware it was happening.

That "doesn't mean they don't care," said Steve Goodkind, who played a key role in both the Coalition for a Livable City and Save Open Space. "But ... you're fighting a city, and you can only do so much."