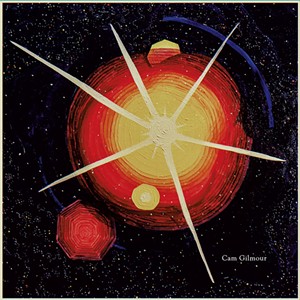 Songwriter and multi-instrumentalist Cam Gilmour is wrapping up his senior year at the University of Vermont. During his college tenure, he's honed a sound he calls "indie jazz," which translates to sprawling prog-rock compositions that are heavy on bossa nova guitar work and horns as lead instruments — Gilmour plays a mean tenor sax. That sound has truly coalesced on his latest LP, Sunburst.

A follow-up to his 2018 full-length, Alone With the Moon, Gilmour's new release is an impressive, ambitious album that plays to his strengths as a musician and a singer. His soft, warm voice suits the material, and his vocal chops have improved considerably since his 2017 debut, Sleeping Minds. In fact, Gilmour is growing into a well-rounded force of nature on several fronts.

Sunburst is very much a concept album, built around cosmically themed songs about love. I know how that looks on paper — I was worried, too. However, Gilmour's writing is surprisingly mature. While his metaphors and lyrics reappear throughout the album, they never wear thin. These songs are humble, sparse and thoughtful.

Gilmour is equally expressive on the saxophone, which is great, given the preponderance of instrumental interludes on Sunburst. "Is This a Dream?" expertly straddles the space between João Gilberto and vintage Blue Note sessions. "Lunar Balance" starts whisper soft and builds to gorgeous midnight jazz with a soothing, reedy outro solo.

Anchoring the album are the tracks in which all of Gilmour's talents converge. "Moon" is a rollicking, Jeff Buckley-style cut that runs from quiet meditation to howling guitar rock. "Vermillion," a slow-burn workout, evolves from surging horn swells to vocal tone poems. Located in the center of the track list, "Horizon Line" is the tour-de-force highlight, integrating killer breaks, vocals and smart, tight arrangements.

The backup band assembled for Sunburst is superb. Keyboardist Jack Hanson shines throughout, and Eamon Callahan's light, expressive touch on the drums is essential to Gilmour's vision. Additional horns from Sam Atallah (trumpet) and Avery Cooper (alto sax, flute) help flesh out some big arrangements. Finally, Greg Freeman, a noteworthy singer-songwriter in his own right, contributes some outstanding guitar work.

Gilmour took an old-school approach to mixing the album. His penchant for huge dynamic shifts can make for uneven listening: I found myself straining to hear during the quiet passages, then lowering the volume when everything came crashing back in.

Quibbles aside, Sunburst is exquisite and unexpected — an impeccable senior project. Though a carefully conceived concept album, it feels like an organic, improvisational night at Radio Bean. Sunburst is a proper debut for the artist that Gilmour turned into during his UVM years. Here's hoping he keeps creating.

Sunburst is available at camgilmour1.bandcamp.com.