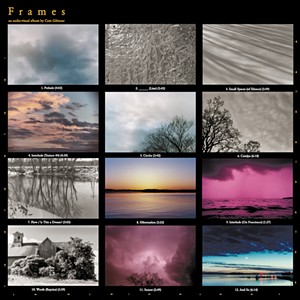 Welcome to Café Gilmour. Hazy, subterranean and off the grid, the after-hours hot spot is where you come to cool down after an evening of sensory overload. The house band, an indie-jazz combo led by recent University of Vermont grad Cam Gilmour, is here to ease your addled spirit and lull you into a trance under soft blue lighting gels.

Framed prints line the club's walls, all shot by the bandleader. They showcase the natural beauty of every Vermont vista, cloudscape, treeline, and glassy surface reflection in the state's many rivers and lakes. As Gilmour's Chet Baker vocals and wordless tenor sax phrases drift like wisps of smoke, the connections between his sedate songs and their visual counterparts emerge. They form a continuum between your eyes and ears.

On his new album, Frames, Gilmour's modi operandi make beautiful harmony. The project is audiovisual; its works in both mediums, grouped together in the album's cover art, share enigmatic names such as "Flow / Is This a Dream?" and "____ (Line)."

Some locals know Gilmour for his music, others for his photography. He describes himself on his Bandcamp page as "A composer from Vermont in tune with the natural world." His bio is accompanied by a snapshot of the artist with his tenor sax silhouetted against Lake Champlain. His lyrics reinforce the vibe he espouses, with natural imagery seeping into his dreamy tunes.

Frames is bookended with swells of harmonized murmurs from Gilmour and his seven bandmates, a motif that also appears at the midpoint on "Interlude (on Prescience)." Floating between harmony and discord, the soft-edged din opens first cut "Prelude" and returns at the end of the final track, "And So." The band rolls in through a fog and exits in a similarly vaporous cloud.

Between those moments, Gilmour and co. make jazz music that flirts with other styles. Ben Rodgers' pedal steel amplifies the mountain-folk aesthetic of "Circles" and later of "Words (Reprise)." Other tracks land more squarely in the realm where jazz buffs might expect to find an artist like Gilmour. For instance, "Small Spaces (of Silence)" is a syncopated, metropolitan jaunt propelled by Sam Atallah's bubbly keys.

One of the most compelling aspects of Frames is its intimacy. Gilmour is right in your ear, his band within arm's reach. They encircle the listener, putting you at the center of a session. It's a sweet place to hang out, and the band is content to have you stay as long as you like.

Gilmour promises to be a perpetually interesting local character. On Frames, he surrounds himself with class-act players, and his inclinations toward visual and sonic poetry are self-assured and easy to love.

Frames will be available on Thursday, August 11, at camgilmour1.bandcamp.com.