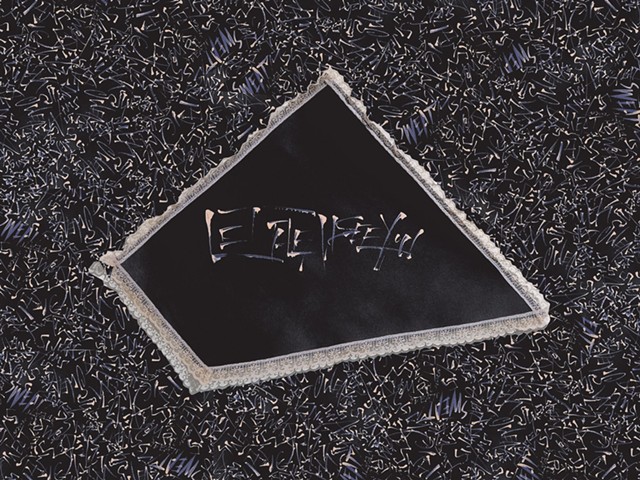 Norwich artist Laura Di Piazza was 12 years old when she received her introduction to calligraphy as part of an "inner-city middle school program" in Brooklyn. "They cut it right away," she said, "but it was long enough for me to get the bug."

Many associate fanciful lettering primarily with wedding invitations, but Di Piazza has found many more applications for her craft. They range from, yes, custom wedding envelope addressing (which she does through her Etsy shop, Here and Now Publishers), to crafting invitations for bar and bat mitzvahs, to collaborating with New York-based French artist Camille Henrot on her recent Berlin Biennale installation, "Office of Unreplied Emails."

"I love that lettering calligraphy can quickly become a moving meditation, which alleviates stress and brings one into the here and now," Di Piazza wrote in an email. "It is not uncommon for the calligrapher to lose all sense of time when lettering."

In her mid-twenties, Di Piazza linked up with the Society of Scribes in New York City, where she volunteered and served on the organization's board. There, she had the opportunity to work with big names in the calligraphy world. These included Michael Sull, a master penman — one of only 14 in the world, according to the website of the International Association of Master Penmen, Engrossers and Teachers of Handwriting.

As her skill grew in a variety of "hands," or styles of calligraphy, Di Piazza began to take on clients through her business, Calligraphy Arts. She held a day job in public relations at the Times Square office of the Screen Actors Guild. "[It] was the complete opposite of the solitude, beauty and tranquility that my calligraphy practice offered," she noted.

So, in 2001, Di Piazza left her day job in a "leap of faith" and devoted herself full time to her lettering practice. "I quickly found that I was able to fill my schedule," she wrote. At her peak, she said, she was booking clients three months in advance.

In 2008, Di Piazza relocated to Vermont with her husband and three small children. She put her business on hold to pursue her MFA in Interdisciplinary Arts at Goddard College. During her studies, she made artworks that incorporated her craft.

Di Piazza evokes the common ground between art and calligraphic text as she explains why people so often associate calligraphy with romance. "The forward slant of a calligraphic script such as copperplate or Spencerian," she wrote, "can visually suggest moving towards another. The curvaceous, flourished letterforms can remind one of the curves of their lover's body ... The letters appear connected [in the final product], but the construction involves many individual strokes that overlap slightly, perhaps not dissimilar to how we build relationships: stroke by stroke, word by word."

Resurrecting her business in Vermont, Di Piazza has adjusted to what she called "a more DIY kind of environment" than New York's. Now 44, she commutes to teach classes in calligraphy at the Society of Scribes in New York City, Dartmouth College, AVA Gallery & Art Center in Lebanon, N.H., and ArtisTree Community Arts Center in South Pomfret. She's also a grant writer for White River Junction's Main Street Museum and an independent curator.

As a teacher, Di Piazza enjoys watching her students find a relaxed flow to their work and become comfortable with adapting traditional hands, which are typically "quite structured." Of such innovation, she wrote, "Scribes ... throughout the ages break those structures, and a new hand is born out of a previous one."

Di Piazza is also at work on a DIY calligraphy guide called Spencerian Hoedown, which will be available on Amazon later this year. Spencerian, she explained, is considered the first American calligraphic hand; New York-born Platt Rogers Spencer developed it in the late 1800s. Her long-form guide builds on worksheets she has made available on Etsy. It's a great tool for couples planning DIY weddings, or for anyone who wants to teach themselves the basics of hand lettering.

Even in an era when many young people are no longer taught cursive writing, Di Piazza has no fear that the calligraphic arts will die out. A quick #calligraphy search on Instagram yields nearly five million results, she noted.

"It's only as difficult as one believes," Di Piazza wrote of learning calligraphy. "If there is an absence of hesitation, if there is trust, you will create something that resonates with you and likely others."

The original print version of this article was headlined "Calligraphy Is Thriving, and Not Just on Wedding Invitations"