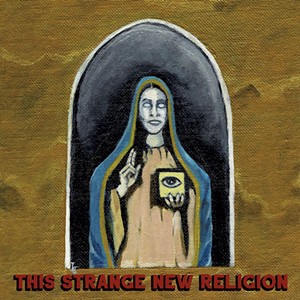 I'll probably get internet-attacked on this one, but the Queen City punk scene ain't what it used to be. No doubt, there are some fabulous punk acts raging across the greater Burlington area. But the halcyon days of 242 Main and all-ages basement shows happening all over town are decidedly in the rearview mirror. Nothing is permanent and scenes change all the time, but in the year 2020 one has to say the healthier punk-rock scene is just across the lake in Plattsburgh, N.Y.

The Lake City has been pumping out the punk in recent years with acts such as Marco Polio, Comrade Nixon and others. Call Shotgun fit right in, while retaining their own take on the genre. Namely, they embrace pop punk, hewing closer to the sound of Alkaline Trio than, say, Green Day.

With This Strange New Religion, the act's second full-length album, Call Shotgun have laid down a marker of sorts, producing a slick, energetic record that drives from the first track to the last. There are blistering rockers, such as "Some Things I've Been Meaning to Say," which comes complete with the big whoa-ohhs and an outro-breakdown guitar solo. These types of songs pair with more contemplative, roomier numbers, including the album-closing title track.

"140 Characters or Less" has all the feel of a late-'90s radio hit. When singer/guitarist Steve Murray declares, "I want to wake up and get high every morning / But I don't know what I'd do with the rest of my day," you can just hear the song becoming a stoner's anthem for the summer.

Murray fronts the group with clever songwriting and a disciplined style of singing that thankfully avoids the sometimes-whiny tone of his contemporaries. Lyrical tropes have a sordid history in pop-punk music. And the older one gets, the less those tropes appeal, if they ever did. Luckily, Call Shotgun avoid cliché at most turns.

Though the songs hit all the pop-punk markers, the band employs little extra boosts to elevate its material. Drummer Joe Templin drives those perfect punk beats with a hint of classic rock bombast. Backed to the hilt by bassist Zack Mullady, the duo lays down a fully formed foundation. Murray's guitar work is also wonderfully accompanied by lead guitarist Joe Aabye, who mixes in a healthy dose of shredding, further bending the band's sound from genre worship.

On their latest effort, Call Shotgun successfully stay true to their influences while pushing into less-trod sonic areas. The result is a virile, ever-moving record from Plattsburgh's increasingly potent punk scene.

This Strange New Religion is available at callshotgun.bandcamp.com and can be streamed through major streaming services. Call Shotgun perform on Wednesday, February 26, at the Higher Ground Showcase Lounge in South Burlington, opening for Bitter Bones and Desmo.