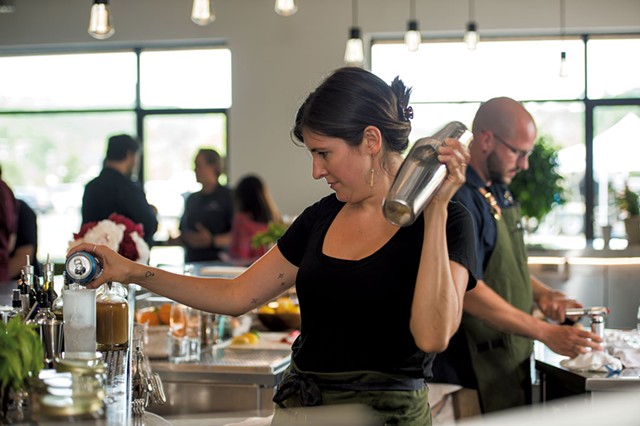 At the newly opened Caledonia Spirits distillery in Montpelier, a quote is painted high on a sunflower-yellow wall above the glowing stainless and copper distilling equipment. "If not with 'milk & honey,'" it reads, "certainly this land o'erflows with gin & whisky."

The line, from an 1811 Peacham newspaper, resonated deeply with Ryan Christiansen, Caledonia's president and head distiller, when he read it several years ago. "It was just so real to us," Christiansen, 34, said on a recent tour of the 27,000-square-foot facility. "We've been waiting for the right spot to put it."

Caledonia Spirits was founded about a decade ago in the Northeast Kingdom. Founder Todd Hardie was driven by a desire to address issues that the 200-plus-year-old quote evokes today, though different from its original meaning. 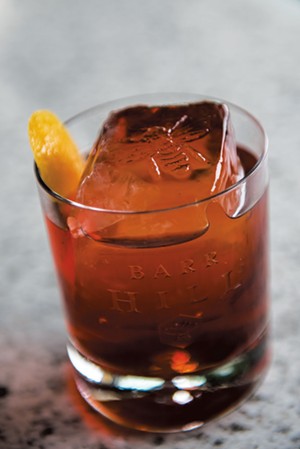 Back in 1811, that Peacham journalist was not writing about challenges facing the state's dairy sector, nor about honeybees, now seriously at risk due to industrial chemicals and destructive mites. The second part of the quote originally referenced the numerous small alcohol stills that abounded pre-Prohibition, not Vermont's thriving contemporary craft distilling sector, of which Caledonia Spirits has become a leader.

Hardie set out to popularize honey-based beverages to highlight the critical and threatened role of bees as pollinators in our food system. A lifelong beekeeper, he was also passionate about creating new forms of land-based businesses that would help support and preserve agricultural communities.

The ability to invest $10 million in an expansive, stylish new facility in the state's capital city is just one indication of the success Caledonia Spirits has achieved so far. According to the Vermont Division of Liquor Control, the distillery's flagship honey-based Barr Hill gin has been the top Vermont-made spirit for the last three years, based on in-state retail dollar sales. This is an especially notable accomplishment because gin rarely leads alcohol sales. Barr Hill Reserve Tom Cat, a barrel-aged gin, and Barr Hill vodka also consistently land in the top 10.

Caledonia Spirits products are distributed in 32 states, Montréal, and a few other cocktail-culture hot spots around the country and world. Volume has tripled since 2015 to about 40,000 cases shipped annually, bringing in $5 million to $6 million in yearly revenue, Christiansen said. 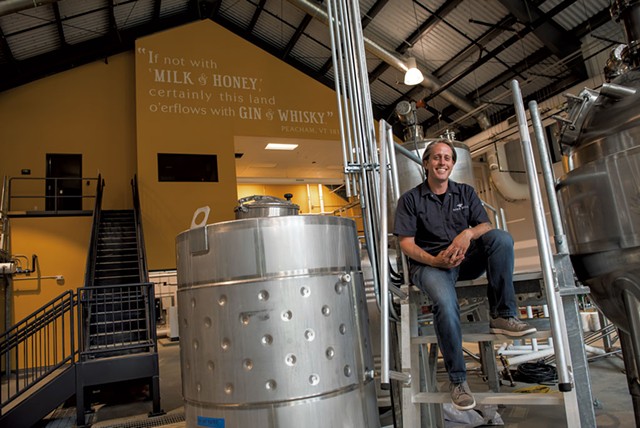 Saturday marked the public grand opening of the new distillery. It also celebrated the end of a four-year process since Christiansen resolved to bring the team back together under one roof. The company's growth had pushed administrative personnel out of the original 6,500-square-foot Hardwick distillery.

The new Montpelier headquarters of Caledonia Spirits was built on a reclaimed granite slag heap on the banks of the Winooski River, with significant infrastructure support from the city. It features a roof of solar panels and a water-recovery system that will result in lower water consumption than the Hardwick location, though it's four times the size.

In addition to becoming the sole production site for the company's much-awarded line of spirits, the industrial-chic building hosts a retail store and a large bar with a window onto a riverside patio.

Visitors can order a selection of sophisticated, creative cocktails made with Caledonia Spirits alcohol (or equally compelling "Temperance Drinks," sans alcohol), while nibbling on Vermont cheeses and cured meats. More substantial fare is also available from a rotating lineup of local food trucks.

Guided tours through the facility explain the company's mission and history and offer behind-the-scenes peeks through large windows into the processes of distilling, packaging and new product research.

It's the Ben & Jerry's tour of adult beverages. Or, as Christiansen put it, "Think of it like the cocktail creemee stand."

Part of the motivation to open the new distillery in a central location was to provide the Caledonia Spirits team, numbering about 40 employees at headquarters, with more direct customer contact. Alcohol is sold through several layers of distribution, Christiansen explained, adding, "It's amazing how little we get to interact with our customers."

He joined Hardie at Caledonia Spirits in 2011 after selling his homebrew supply store in Plainfield. Christiansen grew up there, and his family still owns the local hardware store. In 2015, he purchased the distillery with business partner Minty Conant and other investment support. His mentor, Hardie, was shifting to producing grain for use in both distilling and baking.

On his Thornhill Farm in Greensboro Bend, Hardie now grows the rye used in Caledonia Spirits' forthcoming whiskey. "Todd wanted to be closer to the farm," Christiansen explained.

Looking both back and ahead, Hardie said he takes great satisfaction in the trajectory of Caledonia Spirits. "What's so special about what's unfolding in Montpelier: It's a continuum," he said in a recent phone interview. "We started with a honey-based mead winery and then started adding honey to gin and making vodka from scratch from honey."

Every 750-milliliter bottle of Barr Hill vodka is distilled from four pounds of raw honey sourced from a 250-mile radius around Montpelier. The gin is finished with the same regional raw honey. Now, Hardie explained, he is working with other farmers to increase production of local grain for whiskey and breweries. "The work of Caledonia Spirits is giving legs to the growing of organic grain in Vermont," he said.

Christiansen also hopes to build markets for other products of the Vermont landscape, now that the team has more space to experiment. During a recent preopening event, guests sampled the results of two different research projects: a maple-based gin and a distillate made from burdock root. "We want to work with farmers on new, farm-based spirits," he said.

During the event, a trio of bartenders under the guidance of beverage director Sam Nelis expertly double-fisted cocktail shakers, carved ice by hand from a large block and even branded ice cubes with a custom honeybee imprint.

"We want to build a world-class cocktail bar that respects the craft of how the spirit is used," Nelis explained.

Guests mingled around the Barre gray granite bar, enjoying a wide array of classic and innovative drinks, from a frothy-topped Ramos Gin Fizz to a rosy-hued, bittersweet creation garnished with local strawberries called the Hiking Club.

Perched at the bar, Lorna Corbett and Craig Ball of Montpelier were sipping a Moscow Mule featuring housemade ginger beer and a Tom Collins made with Tom Cat — Ball's regular order no matter where he goes, he said. They had been invited to the gathering because Corbett had gifted her husband a $150 membership in the Caledonia Spirits Waggle Society, which entitles members to various insider perks.

"Why not support a local business that's going to be a ton of fun?" Corbett said.

"The more money we can keep in Vermont, the better," her husband added. "Seems like Montpelier needs a venue like this."

Among the Caledonia Spirits team members at the event was Alex Weiss, the company's sales director. Weiss said he started working for Hardie in 2006 during college, helping to market other honey-based products that predated Hardie's foray into spirits. He moved on to do different things and was living in Brooklyn when Hardie called him in September 2012. "He said, 'I've got this distillery, and I need a salesperson,'" Weiss recalled.

Weiss admitted he had no idea then that Caledonia Spirits would take off the way it has, but he noted, "Todd is such a unique guy. I'd always learned so much from him, and Ryan was an anchor here. They had a vision."

Juggling his 1-year-old child in his arms, Weiss said, "Growth is this crazy challenge for any company. You can stick with the ethics and morals you had from the beginning, or veer off." In the case of Caledonia Spirits, he said, "growth has allowed us to double down on supporting the ag economy and the community."