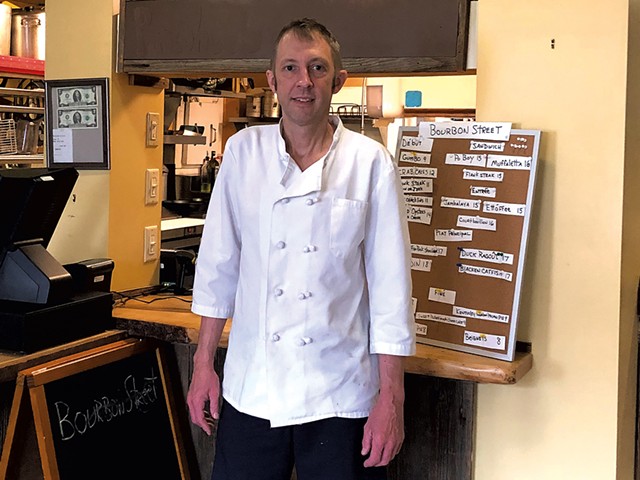 The restaurant at 11 Center Street in Burlington wasn't empty long. Just two months after the Swingin' Pinwheel Café and Bakery closed, Bourbon Street has opened for takeout, filling the air — and to-go boxes — with the aromas and flavors of New Orleans.

Chef-owner Richard Lockwood opened his Cajun-Creole-inspired restaurant on May 25. "Despite the pandemic being such a terrible, destructive force on the economy and people's lives, I saw that there would probably be an opportunity on the other side of it to start a restaurant because so many of them have gone," he said.

Bourbon Street is Lockwood's first restaurant, but the industry veteran, 52, has been cooking locally since the 1980s, including at Howard Johnson's, Sweetwaters and the original Bourbon Street Grill on College Street. For the past 17 years, he's been the kitchen manager at Ruben James.

"Working at Bourbon Street Grill kind of introduced me to the Cajun-Creole universe," said Lockwood, who pays homage to the long-gone restaurant with the crab cakes and flank steak on the menu of his Bourbon Street. He took that inspiration and dived into researching the geographic and cultural roots of dishes such as gumbo and jambalaya.

"It's New Orleans; it's jazz; it's Mardi Gras; it's beignets; it's jambalaya and gumbo," Lockwood said. "I've been thinking about this idea for 10 years, and it's a niche that hadn't been filled."

Bourbon Street is open daily from 4 to 10 p.m. for takeout only, with walk-in and online ordering.

The original print version of this article was headlined "Beaucoup Bayou"