Caitlin Canty's latest album, Reckless Skyline, is at times a dark and brooding affair. A twang-inflected mix of heartbreaking ballads, murky blues and sparsely arranged folk, it is also the smoky-voiced Vermont native's most critically heralded record to date. The Telegraph tabbed it as one of the Best Country Music Albums of 2015. NPR Music praised its grit and emotional punch. And the San Francisco Chronicle opined that the album should make Canty "the next great Americana star."

Canty, who now lives in Nashville after many years in New York City, recorded the album with songwriter Jeffrey Foucault. The two share a band, which includes members of Morphine, Ray LaMontagne's Pariah Dogs, Booker T and Rusty Belle. Touring in support of Foucault's new record, the equally stark and beautiful Salt as Wolves, Canty and Foucault will perform at ArtsRiot in Burlington this Thursday, December 3. In advance of that show, Seven Days spoke with Canty by phone from Nashville.

SEVEN DAYS: You grew up in Proctor. Was your family musical?

CAITLIN CANTY: I grew up in a family of athletes. My dad is a marathon runner. And my brother and I grew up playing a lot of sports. I did band and chorus in school. But I didn't get a guitar until I was a senior in high school. So the songwriting stuff didn't happen until later. Growing up, it was more playing soccer and basketball.

SD: Being a late bloomer, what ultimately led you to music?

CC: I did sing all the time growing up. So the guitar was a vehicle for singing. Once I started writing songs, I got the bug. And I haven't been able to stop since. Music is now the center of my life.

SD: Speaking of guitars, I hear you've got a pretty cool one.

CC: I do! It's a Recording King from the 1930s. The exact vintage is uncertain, but it's from the late 1930s. I bought it in Boston on a tip from a friend who said I should check it out. I wasn't really looking for an old guitar. But I just couldn't leave this one behind. I'd never had the experience before where I was singing and the guitar complemented my voice so perfectly. I had never spent that much money on anything before. And it's not even that expensive of a guitar. I'd just never spent that much money before. Not even on my car. And my car is a shitbox.

But it sounded so dark and beautiful. And when I opened the case, it smelled like cigar smoke. It smells like a library. It's got so many chips and dings in it. It's been the biggest thing that's changed my singing and songwriting. It's almost like having a cowriter, or a partner, where before my guitar was just a vehicle to get a song across.

SD: I don't know if I've ever heard anyone say that a specific instrument fundamentally changed their approach to their music.

CC: Different instruments like different things. My guitar sings better when it's in drop-D tuning. It's more dark and deep. So that made me write more drone-y blues kinds of songs. And it's how I like to sing, too. 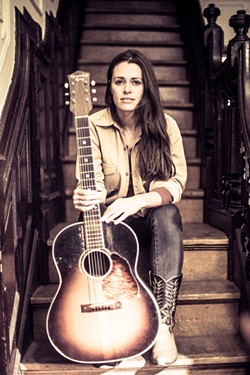 CC: Yes. I wrote most, if not all, of the songs for Reckless Skyline on it. And everything kind of came together around the same time, too. Jeffrey Foucault signed on to produce it right after that, and the band came in then. So I had all this excitement and a purpose. I was overjoyed working so hard on all those songs, and it didn't feel like work at all. It was a beautiful time.

CC: I had never worked with a producer before. And it was spectacular. He says a producer's job is to do all their work before and after. A lot of people think what a producer does happens in the session, like, "Let's hear another take of that." But really what helped me was the preparation before: sending him songs and talking about approaches we might take.

And then after the sessions ... usually, the post-session decisions multiply under your fingertips and you can get lost in the weeds there. But one of Jeffrey's approaches is to choose a take in the moment and then the rest of the takes are dead to us. And I really think that helped move things along.

And it wasn't like anyone was just following directions. Those guys have all played in different incarnations of Jeff's band. And I brought along another Vermonter, Matt Lorenz, who is the Suitcase Junket. So it was a really cool first gathering of this crew. Now we've been touring together in different formations for almost two and a half years.

SD: You recently moved to Nashville. What do you think of Music City?

CC: I was [coming] here a lot to do writing sessions and sing on people's records. So I've spent a good deal of short-term time here. So it feels like home already. Also, I chose this place. Which is the first place I've really chosen. I was born in Vermont and moved to New York because of a job and then just couldn't leave. But Nashville is so comfortable for me. And for a musician, it's just an easier life. You can tour in and out; it's a lower cost of living. If you need to find a banjo player for something, you could throw a stone and hit one. But to be honest, I haven't been here much since I moved here. I've been running around behind Reckless Skyline, which came out only in January. I've been touring like crazy and kind of leaving my guitars in Nashville.

SD: You do tour a lot. Do you have any tips or tricks for staying sane on the road?

CC: I do run when I can. It helps. I also try to eat well. Not so much super healthy, but just sitting down for a meal. That makes a big difference when you're hustling. Our workday starts around four o'clock and ends at midnight. So my only trick is to ask for an early load-in, just to get that shit done and eat before the show. Otherwise, it's the 11 o'clock gas-station dealie. Nobody likes that.

CC: Would it be pandering to say Salt as Wolves? [Laughs] Actually, what I can't stop spinning right now is an old record, Charley Pride in Person [Live at Panther Hall]. Every time I'm making dinner at home in Nashville, I throw that one on and sing along to every old country song on it.