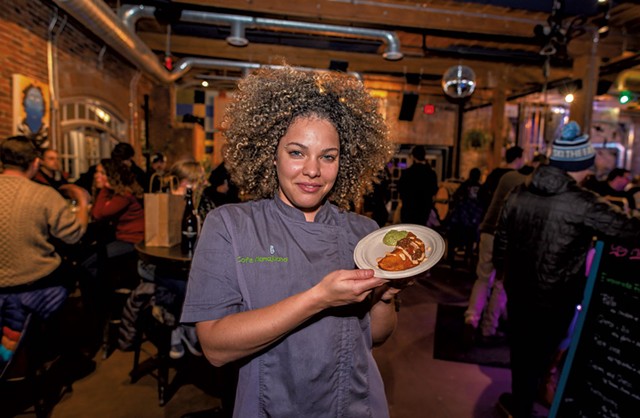 On Wednesday, the James Beard Foundation announced its 2022 Restaurant and Chef Awards semifinalists, bringing back the prominent industry awards for the first time since 2019.

Three Vermont businesses made the list: Burlington Dominican fusion restaurant and market Café Mamajuana is a semifinalist in the Best New Restaurant category. Nisachon Morgan of Saap in Randolph and Christian Kruse of Black Flannel Brewing in Essex Junction both earned nods for Best Chef: Northeast.

Café Mamajuana owner Maria Lara-Bregatta learned the news in a congratulatory message from a follower on Instagram.

"It's pretty crazy," she said. "We're just a little shop in the Old North End."

Lara-Bregatta spoke with Seven Days before heading to the restaurant to celebrate with her team, including head chef Eric Hodet, who she said "really held it down" while she was pregnant and on maternity leave during the restaurant's first year.

"I'm going to buy them a fancy bottle of Champagne, and we're going to pop it off," she said.

Café Mamajuana opened in the cooperatively owned building at 88 Oak Street in November 2020, sharing the space with Poppy Café & Market. That arrangement ensured the restaurant's success, Lara-Bregatta said, as well as help from two key people: Matt Cropp, board chair of the Oak Street Cooperative and executive director of the Vermont Employee Ownership Center; and Will Clavelle, projects and policy specialist for business development with the City of Burlington.

"Without the [Oak Street Cooperative] I never would have been able to afford to have a platform to showcase any of these foods that we're making," she said. "Reflecting back on how I started and how much I struggled to get in the door, I'm just ecstatic."

Lara-Bregatta said her next goal is to write a cookbook. "I've been jotting down thoughts and ideas and recipes for a few years," she said. "Maybe this is the world telling me I'm ready to press forward on that."

The James Beard Foundation paused its annual awards in 2020 and 2021 "in order to take time for self-reflection around who and where we are as an organization," according to a statement on the foundation's website. In August 2020, it announced an audit of the awards' policies and procedures to "remove systemic bias" and "increase the diversity of the pool of candidates," among other goals.

The final list of Restaurant and Chef Awards nominees will be announced on March 16; the awards ceremony will be held in Chicago on June 13.