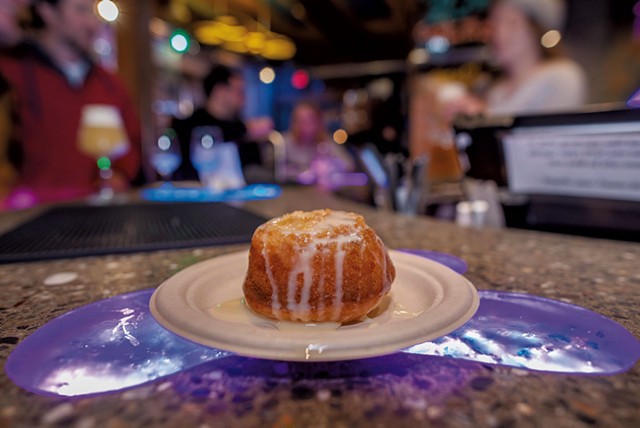 Maria Lara-Bregatta should give lessons on how to run a pop-up. Somehow, while slinging empanadas out of a makeshift kitchen, she manages to greet customers — with hugs for her regulars — take orders, make change, and have in-depth conversations about colonialism and authenticity. No big deal.

Lara-Bregatta, 26, is the chef-owner (and prep cook, marketing person and accountant) of Café Mamajuana. She's bringing Dominican cuisine to Burlington through pop-ups, catering, wholesale and, if all goes well, a permanent restaurant next spring.

The goal of having a restaurant snuck up on Lara-Bregatta. She grew up in a restaurant family in New Jersey and learned how to cook from her dad, Luis Lara, who is from the Dominican Republic. "I was 5 years old when we got our first restaurant, so I know all the craziness," Lara-Bregatta said. "I never thought I would do it, but when I moved to Vermont, I thought, I have to do this. There's no food here that I eat."

At first, Lara-Bregatta mostly prepared traditional Dominican dishes for herself and her "partner in love," who is also Dominican. "I started out cooking for him and cooking for friends, and now I'm cooking for everybody," she said.

Those traditional dishes include crowd-pleasing empanadas; plantains in various forms (and of varying ripeness); combinations of rice, beans and protein; and sancocho, a three-meat stew with yucca that is considered the national dish of the DR.

Describing Dominican cuisine can be a challenge, Lara-Bregatta said, because the food, like the Dominican people, isn't just one thing. "Because of the way that colonialism happened in that country, Dominican people are from all over. Dominican food stretches from Spain to Africa and beyond; it's all a product of the Atlantic slave trade," she explained.

To cater to the Burlington market, Lara-Bregatta uses as much local and organic produce as possible. Vermont has no plantain farmers — yet, she joked, noting the trajectory of climate change — but the locally owned Asian markets are a reliable source.

"People like comfort food here. It's cold," Lara-Bregatta said. "Dominican food, even though it's tropical, has warmth."

One of the biggest surprises for Lara-Bregatta has been the support she's received from the local Latinx community. "When I went to [the University of Vermont], and when I was starting the business, I thought there were no other Latinas in the area," she said. Now, she regularly caters for UVM's Alianza Latinx, a student-run organization that raises awareness about Latinx and Hispanic culture. "I think my food really resonates with people of color, even beyond the DR, who haven't been able to have that food around here," she said.

Selling people on Dominican cuisine and establishing a customer base has happened quickly for Lara-Bregatta, who held her first Café Mamajuana pop-up during the 2018 South End Art Hop. Then a server at ArtsRiot, she saw an opportunity to jump into business on one of the South End's busiest days of the year.

"ArtsRiot only had their truck parked outside, and there are 10,000 people that come through," she said. "I mentioned that if [ArtsRiot] wanted a second vendor, I knew a girl who might want to do something." Her ArtsRiot coworkers didn't even know that Lara-Bregatta could cook — or that she was scheming up a business — but co-owner PJ McHenry gave her a chance.

The first pop-up was a success, and Café Mamajuana has been all over town ever since — from Deli126 to Foam Brewers to Stonecutter Spirits Highball Social to Summervale and more. Lara-Bregatta left her job at ArtsRiot four months ago and now focuses on her business full time, popping up two or three times a week in addition to catering and developing a line of wholesale salsas that will soon be available at City Market, Onion River Co-op.

Finding places to pop up happens organically for Café Mamajuana, Lara-Bregatta said: Business owners tend to message her, rather than the other way around. She often pops up at bars where her food brings a new dimension to the business, encouraging patrons to have another drink and stay a while.

"Bars that do heavy volume that don't have a food program are where it's at," Lara-Bregatta said during a recent pop-up at Foam. Her setup there, on a side counter behind the bar, consisted of containers of prepared empanadas and a fryer. It was a Thursday evening — Jazz Night — and a big crowd was drinking the brewery's IPAs and sour beers and listening to Bella and the Notables.

A steady stream of regulars made their way through the crowd to order. Among them was Miranda Syp, owner of Syp Brand Pierogi, who hosts twice-monthly Pierogi Mondays at Barrio Bakery. The two business owners, who have worked side by side at past events, chatted about the logistics of pop-up kitchens and ideas for future collaborations.

"Maria's is the only pop-up I've ever really followed," Syp said. "I never know what to expect, but I never really care. It's always good."

"We've got to support each other," Lara-Bregatta said.

The night's menu, written in Spanish and English, was all empanadas: easy to eat, crispy, savory and perfect with a beer. Mamajuana empanadas have a signature orange hue that comes from the addition of achiote, or annatto, to the dough. Achiote is typically considered a Mexican ingredient, but on a recent trip to the DR, Lara-Bregatta encountered it while horseback riding.

"The guide pulled something off the tree to show me, and it was achiote," she said. "He opened it and put a stripe on my arm and told me it was what the native Taíno people used as war paint." The moment was an emotional one, she recalled, giving meaning and history to an ingredient that Lara-Bregatta uses and grows herself in Vermont.

At Foam, the empanadas came with five different fillings: pollo (the most popular, Lara-Bregatta said); ropa vieja, stewed steak that falls apart like the old clothes it's named for; salami and queso, with a soft Dominican salami, cheese and mashed green plantains; vegan butternut squash with beans; and, to keep things interesting, a Thanksgiving filling of turkey, gravy, cranberries and stuffing.

"I like to play around seasonally, because I want to keep my audience captivated," Lara-Bregatta said. Putting out new flavors and playing with traditional dishes excites her, too, as she explores her identity and the things food can represent. Café Mamajuana offers a full Thanksgiving catering menu, including the empanada, which Lara-Bregatta said is "like the gum Violet Beauregarde chews in Willy Wonka; it's a three-course meal in one."

When questioned about creating a Dominican menu for a colonialist holiday, Lara-Bregatta said the irony fits right into her approach to food. "Making this Thanksgiving menu is a 'fuck you' to Christopher Columbus, and I love that," she said. "I see what colonialism has done to the Dominican Republic, but food might be the one good thing that's come out of that oppression. It's mixing cultures, and where would we be without that layering of flavors?"

"If I could use one word to describe what I want to do, it would be authentic. It has its problems," Lara-Bregatta said, acknowledging that diners bring their own expectations and standards of authenticity. "I'm not straight out of the island, but I say my food speaks for itself."

Her travel experiences have made her think about that concept of authenticity. On a recent trip to the DR, Lara-Bregatta was surprised that she had trouble finding the dishes she'd learned from her father — what she considers traditional Dominican food.

"I went to the DR to eat and to think about the menu, but a lot of the food I found was Americanized or Italian," she said. The country thrives on tourism, and restaurants in its cities have succumbed to the global palate.

"I've gotten flak in the U.S. for cooking Dominican with Italian influences — my mother is Italian — but that's a lot of what they have there now, unless you're in a small town or buying from a street vendor. They have pizza and pasta, but I wanted rice and beans and sancocho," Lara-Bregatta said. "It's hard to decipher what's authentic when you go to the place and they're not trying to be authentic themselves."

Looking ahead, Lara-Bregatta is working on financing a permanent home for Café Mamajuana through various channels, including an iFundWomen campaign. She has struggled with contracts that fell through and potential investors who are wary of her age and experience level.

"I've been turned down by a lot of white old men," she said. But she's thankful for the support she's gotten from the community, including Vermont Womenpreneurs, the team at ArtsRiot, and all the businesses and customers that have sustained her pop-ups.

When she settles in her own space, Lara-Bregatta doesn't plan to let anyone's concept of authenticity keep her from cooking her own way. "I market myself as Dominican fusion, but ultimately, I'm Italian and Dominican and Congolese. I'm from all these places, and I want to showcase all my DNA," she said. "After all, what's more authentic than being yourself?"