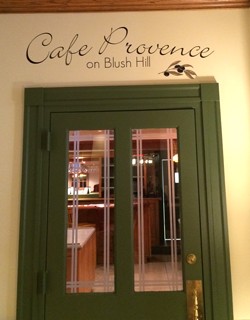 The Wandering Moose Café is no longer. French stews, pastries and wines will soon replace it inside Waterbury’s Best Western Plus when its restaurant reopens as Café Provence on Blush Hill.

If the name sounds familiar, that’s for a reason: Chef Robert Barral, owner of Brandon’s Café Provence, is the force behind this second outpost.

“It will be 10 years [that I’ve run Café Provence] in July, and I was so ready for something new. When this opportunity came up, I couldn’t turn it down,” says French-born Barral, who lived in Waterbury when he was executive chef of the New England Culinary Institute. “It’s a bit like going back home.”

While Barral owns the new business, Ittai Azoulay, his current sous-chef, will move to Waterbury to oversee its kitchen while Barral continues to helm the Brandon restaurant. Azoulay will bring with him many of Café Provence’s recipes, including the restaurant’s famous seafood stew over saffron risotto.

The new menu should be in place by late February, when the staff plans to host a series of friends-and-family events before opening to the public in early March. “It’s a menu that will follow the seasons,” Barral says.

The bar will offer French twists, too, such as a wine list anchored by the private-label wines Barral’s family makes in France’s Languedoc region. They include a rosé, a Syrah-Cabernet Franc blend, a Chardonnay and a Sauvignon Blanc.

Barral was tapped by Melissa Moore, who took over as the hotel’s general manager last year. “We have this very quaint little restaurant, but it never seemed to get enough ‘oomph’ behind it,” Moore explains. Now, she says, “We’re really excited. It’s exactly what we need here, excellent food at a reasonable price point.”

The hotel has lightly renovated the 62-seat space in anticipation of the switch. Café Provence will be open for dinner six days a week, with brunch on Sunday.

The original print version of this article was headlined "French Twist"