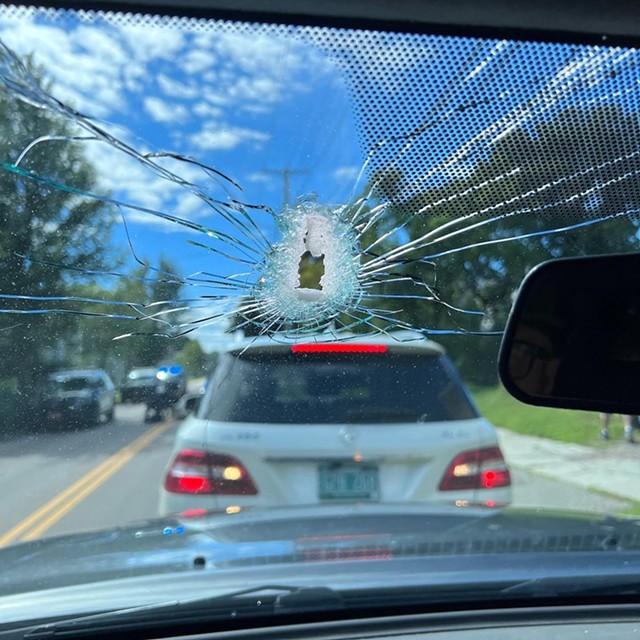 Burlington resident Colin Burch was driving home last Saturday afternoon when, he said, a bullet fired by a police officer nearly hit him in the head.

Burch, in the driver's seat of his truck, found himself waiting in a line of cars that had come upon a tense scene unfolding in the middle of an Old North End street. Three Burlington cops were talking to 20-year-old David Johnson, who was standing on a sidewalk holding a kitchen knife during an apparent mental health crisis. Sgt. Simon Bombard positioned himself behind the door of a police cruiser, his pistol trained on Johnson, Burch told Seven Days.

What happened next was, to Burch, a blur. Police investigators say Johnson charged at Officer Brock Marvin, who deployed his Taser, while Bombard fired three shots. One of the bullets struck Johnson in the leg, wounding him. Another hit a police cruiser. The third ricocheted before bursting through Burch's windshield, leaving his arm bloodied from bits of shattered glass.

Burch later measured the distance between the hole in his windshield and where his head might have been. The bullet missed him by maybe two inches, he calculated.

"I’m very lucky to be alive," Burch said in an email, "as is the man who called 911 for himself because he was in crisis." 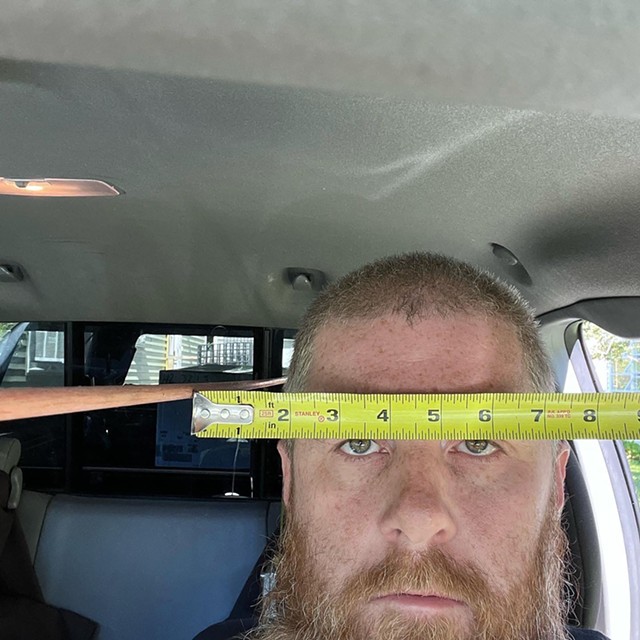 Earlier this week, Vermont State Police, the agency investigating the police shooting, acknowledged that one of the bullets went through the windshield of an occupied truck. According to the agency, Burch isn't the only person who was nearly struck: Crime-scene analysis suggested the same bullet first passed through Officer Marvin's pant leg, "changed trajectory to an upward angle" and "ricocheted off the rear driver's side of a parked SUV," before hitting Burch's truck.

Burch's account sheds new light on the chaotic encounter on Manhattan Drive, which involved not just police and a man in crisis but also numerous bystanders who were caught in the cross fire.

Police cameras captured aspects of the encounter, but the VSP does not typically release such footage while its investigation into a police shooting is pending. That leaves the public to rely on law enforcement and witness accounts to understand what transpired.

Charges Filed Against Knife-Wielding Man Shot By Burlington Police Officer
By Derek Brouwer
Crime
Johnson was hospitalized, then later arraigned at the criminal courthouse in Burlington on felony and misdemeanor charges stemming from the incident. The Chittenden County State's Attorney's Office accused Johnson of intentionally provoking police to shoot him; a police affidavit indicates Johnson made suicidal statements and had called 911 to get officers to respond. On Wednesday, a judge ordered Johnson jailed pending further proceedings.

On Thursday, using business accounts on social media, Burch posted photos from the scene and a statement about his experience. But he later deleted much of the content, saying it was "getting the wrong kind of attention."

"My intention is to try [to] change how the city responds to mental health calls," he wrote, and how the Burlington Police Department "manages situations and uses force."

On Friday, Burch recounted more details about the moments leading up to the shooting in emails to Seven Days.

Burch, who was driving westbound on the residential street, wrote that he came upon the standoff after driving around a bend in the road near the intersection with Lafountain Street.

He stopped behind a white SUV. Ahead of the SUV, Burch saw an officer standing in the roadway with his Taser aimed at Johnson.

Parked police cruisers were blocking traffic coming from the other direction, but Burch said there was nothing to redirect the flow of westbound traffic. "Because of this, westbound traffic quickly backed up and it wasn’t possible for anyone to turn their vehicle around and remove themselves from the scene," Burch wrote.

By that point, Burch said, Bombard already had his pistol drawn. Vermont State Police confirmed on Friday that the sergeant drew his weapon "shortly after arriving on scene and observing Johnson in possession of a large knife."


Over the next four minutes or so, officers tried to convince Johnson to drop the knife. Sgt. Bombard asked another officer to get a “bean bag,” apparently referring to a type of nonlethal ammunition. “As Sergeant Bombard asks for this,” court documents state, Johnson charged at Marvin holding the kitchen knife.

The drivers weren't the only bystanders, Burch said. He recalled seeing a woman standing on the porch of a residence behind Johnson "throughout the incident." Several pedestrians watched from the sidewalk opposite Johnson. At one point, Burch said, a teenager rode a scooter down the sidewalk toward Johnson before Bombard waved him away.

The woman, the teenager, the drivers and some of the pedestrians were all "down range" of Bombard during the incident, Burch said.

VSP spokesperson Adam Silverman said on Friday that the Burlington officers on-scene had requested backup to help manage traffic. He could not confirm whether additional officers had arrived before Bombard fired his gun. Burch said he couldn't recall whether other police had arrived.

Burch, who said he was interviewed by police at the scene, wrote in his initial social media posts that he was looking to contact an attorney before saying more about what happened. He clarified on Friday to Seven Days that he has no plans to seek a "financial settlement" from the city.

"That wouldn’t change anything and would only hurt the taxpayers of my community," he wrote.

Rather, Burch said, he hopes sharing what he saw will help spur "a drastic change" to policing in Burlington.

"I’m seeking legal counsel only to have help navigating the process of trying to make these changes in the most effective way," he wrote. "I just want everyone in my city to be safe and cared for."