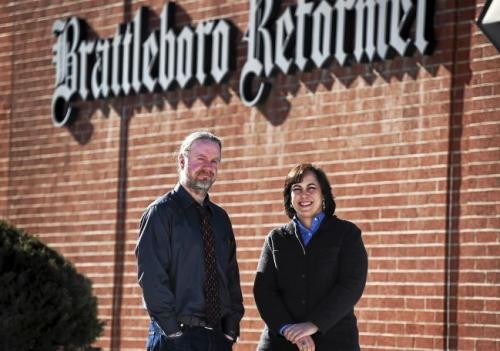 When Norman Runnion left the Brattleboro Reformer in 1990, it was still the kind of ambitious, authoritative daily newspaper one could find in small towns across America.

The paper boasted a two-man bureau in Bellows Falls, a robust newsroom in Brattleboro and correspondents scattered throughout Windham County's rural reaches. All told, some 15 people cranked out the news for the Reformer, six days a week.

Runnion, who covered everyone from Winston Churchill to John F. Kennedy in his early years at United Press International, joined the Reformer's staff in 1969 and served as its managing editor from 1971 until his departure nearly 20 years later.

"I'm a newspaperman, my father was a newspaperman — I love that word, I grew up on that word," he told reporter Kevin O'Connor in a 1989 interview. "It would never have occurred to me to be anything else."

The 85-year-old Runnion died June 19, as O'Connor reported for VTDigger.org and the Commons.

A week later, the paper he once loved died, too.

Last Friday, the top brass at New England Newspapers, Inc. initiated the biggest round of layoffs in years at the Reformer and its three sister papers, according to several people close to the situation who spoke on the condition of anonymity.

Precisely how many people lost their jobs remains unclear. The papers haven't written a word about it — and publisher Ed Woods and vice president of news Kevin Moran did not respond to a request for comment. But according to insiders, roughly a dozen employees of the Reformer, Bennington Banner, Manchester Journal and Pittsfield, Mass.-based Berkshire Eagle were axed.

In January, NENI named Reformer executive editor Tom D'Errico to a new content marketing position at the company and tasked Banner managing editor Michelle Karas with running both the Brattleboro and Bennington papers. But when Karas left last month for a new job in Colorado, even that combined position was eliminated, sources say.

On Friday, D'Errico lost his job, too.

As recently as 2007 and 2008, when I worked at the Reformer, the paper still had five reporters on the beat. But after transferring Chris Mays to Bennington earlier this year and cutting Faher, the only reporters remaining are Howard Weiss-Tisman and Domenic Poli.

Adding insult to the injury of less local news in print: Just last week, the Reformer upped its newsstand price from 75 cents to a dollar.

The top brass didn't say much as they handed out severance packages Friday and Monday, sources say. After Seven Days reached out for comment and VTDigger.org broke the news Tuesday, Woods emailed staff members to "acknowledge the layoffs" and urge them to refrain from commenting publicly.

"With these layoffs, we often see an influx in questions from outside the company," Woods wrote. "The fear is that fewer people will produce a lesser quality product."

"As we move into a new fiscal year, we have an obligation to 'right size' the company, based on updated financial performance and volume expectations," he wrote, seeming to acknowledge the pressures facing most daily newspapers.

But two paragraphs later, Woods wrote that the company had "just experienced an improved and successful fiscal year."

He concluded, "We are positioned well for the future and our financial stability is not in question."

Its ownership certainly is.

Last September, the hedge fund that runs the place, Alden Global Capital, put NENI's parent company, Digital First Media, up for sale. In March, Reuters reported that the private equity firm Apollo Global Management planned to buy DFM, the nation's second biggest newspaper chain, for $400 million — but the deal fell through and Alden pulled the company off the market.

Now, according to former DFM editor Matt DeRienzo, "Buyouts and layoffs are quietly taking place across the country" at the company's roughly 100 dailies and weeklies. Last week, upstate New York's Record and Saratogian announced that six employees had accepted buyouts — including two 40-year veterans — following five layoffs in May.

NENI's Vermont papers are hardly the first in the state to shed staff. The Gannett-owned Burlington Free Press and locally owned Rutland Herald and Barre-Montpelier Times Argus have endured several rounds of layoffs in recent years.

But unlike the regions those dailies serve, southern Vermont has never been covered adequately by statewide media outlets. Now that the Herald has largely pulled out of Windham and Bennington counties and NENI's papers have been cut to the bone, there are woefully few reporters south of Route 4. The Commons, a scrappy, nonprofit weekly based in Brattleboro, is practically the only game in town.

Runnion might be disappointed, but he certainly wouldn't be surprised by the state of his old newspaper. The writing has been on the wall since 1995, when the local family that owned the NENI papers sold them to a national chain. In the years since, a series of corporate owners have slashed salaries, cut staff and generally undermined their own product.

What a surprise that, 25 years after Runnion's departure, the Reformer's circulation has dwindled from a peak of 10,000 to less than half of that!

In a speech to several press associations after his retirement, O'Connor reported, Runnion criticized the media for its "growing ineptness" and blamed its problems on "corporate obsession with the bottom line."

Hate to say it, Norm, but it's only getting worse.

You could be forgiven for missing some pretty significant news in Vermont politics last Friday, what with the headlines coming out of the Supreme Court, Charleston, Greece and Dannemora.

For weeks, state politicos have been waiting on Congressman Peter Welch (D-Vt.) to decide whether he'd seek to replace retiring Gov. Peter Shumlin in 2016. You may recall that, in these very pages, I did my level best last week to goad Welch into a run.

So much for that!

On Friday at 10 a.m., the congressman announced he'd remain inside the Beltway and seek a sixth term in the U.S. House next year. Less than a minute later, national news outlets reported that the Supreme Court had legalized same-sex marriage. So, you know, that kinda stole the show.

In a conference call with reporters later that morning, Welch said he'd pondered the allure of spending more time in the Green Mountains and had asked himself, "How can I best serve Vermonters?"

The answer: "That's a tough call, because obviously both positions provide a real opportunity to do it," he said. "And my conclusion was sticking here in Congress where I've established these relationships, that whoever replaced me — it would take time to be able to do it, if they were able to."

With Welch out of the running, several Dems who'd said they'd defer to the senior statesman indicated they were back in the game — including former human services commissioner and lieutenant governor Doug Racine of Richmond and former diplomat and state senator Peter Galbraith of Townshend.

But the three candidates doing the most organizing behind the scenes — and attracting the most attention — were House Speaker Shap Smith (D-Morristown), former state senator and Google exec Matt Dunne of Hartland, and Secretary of Transportation Sue Minter of Waterbury.

Dunne, who's run for statewide office twice before, and Smith, who's led the Vermont House since 2009, are likely the best-known candidates — and both are almost certain to run. The only question is when they'll announce.

Dunne is on a family vacation this week and didn't return a call seeking comment. Smith said he's "seriously considering it" and expects to announce his intentions "sooner rather than later."

Minter, who many expected to run for lieutenant governor before Shumlin announced his retirement, is a little harder to predict. Some of the state's most influential female voices, including former governor Madeleine Kunin, have been urging her to set her sights higher than lite gov — noting that just one of the state's nine statewide seats is held by a woman: Treasurer Beth Pearce.

"I am absolutely encouraged by the idea that we could see a really strong, viable candidate come forward who also happens to be a woman," says Sarah McCall, executive director of Emerge Vermont, which trains women to run for office. "Sue Minter is as qualified as any candidate in the race."

Minter says a statewide run would require her to step down from the Agency of Transportation — a move she doesn't want to make before Congress funds a long-term highway spending bill, which is due later this summer.

"Honestly, I'm thinking about all of this now, but I'm not planning to make any decision until after the summer," she says. "There are lots of options, including staying with my job. But there's also the possibility of running for office, including the governor's race."

Minter's not the only one taking her time. On the Republican side, Lt. Gov. Phil Scott says he won't make up his mind until "beyond Labor Day." As Welch did with the Dems, Scott appears to be freezing other potential GOP candidates in place, such as former gubernatorial candidates Randy Brock and Scott Milne.

So should I try to goad Scott into running, too?

Librarians at the University of Vermont's special collections say interest is spiking in the "Bernard Sanders papers" — 30 boxes of meticulously organized material documenting Sanders' eight years as mayor of Burlington.

That should come as no surprise, given the independent senator's rapid rise in the polls in New Hampshire and Iowa, which hold the nation's first presidential nominating contests.

Media outlets, such as the Guardian, have drilled deep into the archives and unearthed tasty tidbits — but they're not the only ones interested in getting to know the senator.

Last Thursday, two casually dressed twentysomethings were spotted combing through the Sanders files and decades-old Vermont newspapers. As they were on their way out the door at the end of the day, Seven Days asked what they were doing.

As they emerged into the sunlight outside Bailey/Howe Library, Seven Days pressed again: "Come on! We're all doing the same thing."

"We're just looking," said the other one, dressed in a white shirt with black stripes.

So who were these mysterious characters? Opposition researchers working for one of Sanders' rivals? Earlier that day a super PAC supporting former Maryland governor Martin O'Malley launched the first negative ad of the race targeting Sanders.

Asked if Team O'Malley had dispatched Flannel Man and Stripy to Burlington, campaign spokeswoman Lis Smith said, "We have not, and they are not affiliated with our campaign."

But wait! Here's a clue: That T-shirt Flannel Man was wearing? It read, "New Hampshire for Jeanne Shaheen."

Asked if Flannel Man and Stripy belonged to Team Clinton, Kirstein did not respond.

Welcome to Burlington, Hillary. Next time, tell your people to leave their Shaheen shirts at home.