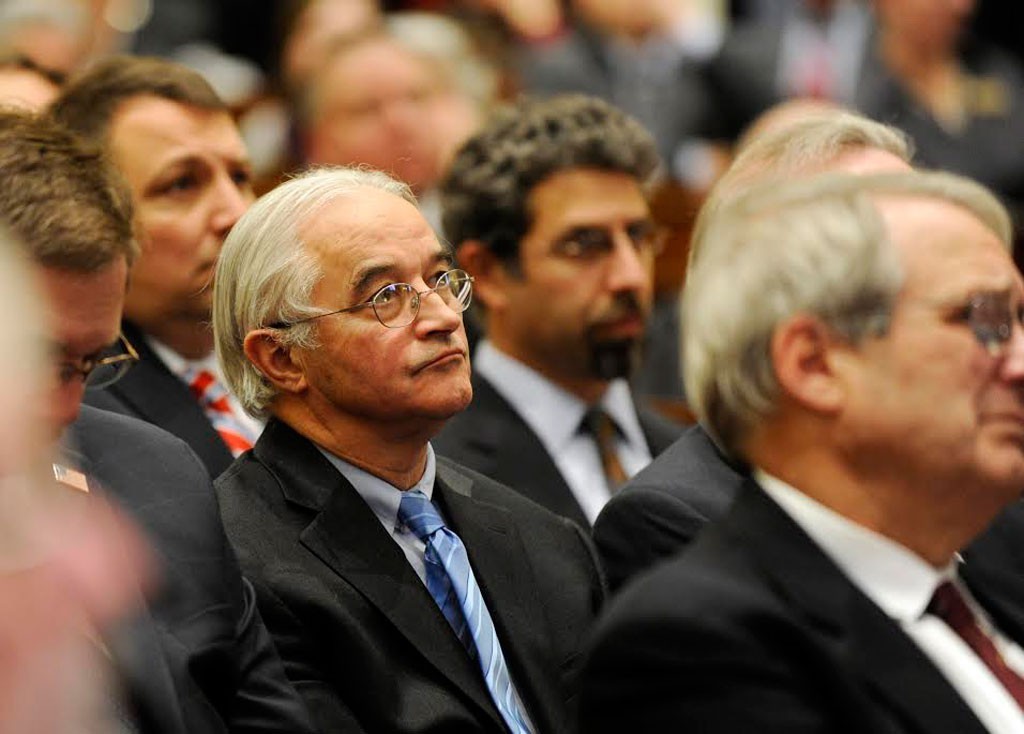 Bill Sorrell could have ended three decades in public service on his own terms. Instead, the 68-year-old Burlington Democrat let his legendary hubris take him down.

So when he announced Monday that he would retire in early 2017, there was no triumphant press conference, celebrating Sorrell's significant successes fighting the tobacco industry and environmental degradation. Instead, facing an ongoing investigation into whether he took official action at the behest of campaign donors, Sorrell issued the news in a terse, five-sentence statement emailed to reporters.

It was as if Vermont's longest-serving attorney general was limping away, his tail between his legs.

Sorrell's slow-motion collapse began last March when he giddily announced at a Montpelier press conference that he was throwing the book at Dean Corren, a Progressive/Democrat who ran unsuccessfully for lieutenant governor in 2014. Corren, the AG alleged, had violated Vermont's public financing law by asking the Vermont Democratic Party to send a supportive email to its members.

Sorrell's proposed punishment for the email, which was valued at $255? A whopping $72,000 out of Corren's own pocket.

Bizarrely, Sorrell argued at the press conference that Corren's use of public financing, which provided his campaign with $180,000, gave him an unfair advantage over those who had to prostitute themselves to campaign donors. Unlike other candidates, Sorrell said, Corren didn't "have to spend the time and have the IOUs, if you will, real or perceived to be there, to those who would otherwise contribute that $180,000."

Before he could dig his hole any deeper, Sorrell interrupted himself and redirected: "I mean, I return virtually all phone calls, but I certainly appreciate those who support my campaigns."

Sorrell's comments prompted Seven Days to examine the AG's own compliance with campaign-finance laws — and his relationship with his donors. The results, reported over the course of two months, were disturbing.

In some cases, Sorrell simply did not abide by the letter of the law he was charged with enforcing. For instance, his reelection committee improperly reimbursed the candidate for expenses 16 times in four years — to the tune of $18,542. In each instance, it failed to disclose what Sorrell had spent the money on and whom he had paid.

Other findings were more troubling.

During the 2014 campaign cycle, Sorrell took three-quarters of his $56,365 fundraising haul from out-of-state attorneys, law firms and corporations — many of which were lobbying his office at the time. At least twice in January 2014, Sorrell took official action at the behest of corporate lobbyists — representing the tech industry and Republican mega-donor Sheldon Adelson — within days of accepting donations from those lobbyists.

Many of those contributions came during all-expenses-paid trips to exclusive resorts, during which he hobnobbed with his peers and lobbyist friends at meetings of the Democratic Attorneys General Association and its counterpart organizations. According to travel records obtained by Seven Days, Sorrell spent at least 138.5 days out of state in 2013 and 2014. Lobbyists flew him to New York City and San Francisco in 2014 to meet with their clients — and put him up in fancy hotels.

During a December 2013 trip to New Orleans, lobbyists for a Dallas plaintiffs' firm met with Sorrell at the Ritz-Carlton to convince him to file suit against the oil and gas industry, records showed. A week later, they and others associated with their client, Baron & Budd, donated $10,000 to Sorrell's reelection campaign during a Washington, D.C., fundraiser. Sorrell himself admitted that the potential lawsuit, concerning the gasoline additive MTBE, was discussed at the event.

"I think what came up is they were involved in MTBE litigation and they would like to talk to us about the possibility of Vermont filing suit," Sorrell told Seven Days in March. "Would we take a meeting to discuss this matter or something like that?"

Sorrell took the meeting, filed the lawsuit and hired Baron & Budd to serve as outside counsel. A contract he approved guaranteed the firm and its lobbyists a percentage of any winnings.

Seven Days' investigation prompted Brady Toensing, a Charlotte attorney and Vermont Republican Party vice chairman, to file a complaint against Sorrell and demand that he appoint independent counsel to probe the matter further. A Senate committee called for the same, prompting Gov. Peter Shumlin and a committee of state's attorneys to hire former representative Tom Little to investigate whether the AG had broken the law.

Sorrell, who declined to comment for this column, has long denied any wrongdoing. For months, he told reporters that he would not decide whether to run for reelection until Little completed his investigation, which he'd hoped would happen by the end of August.

Little declined to comment on the status of his investigation, and a spokesman for the state's attorneys who hired him, David Cahill, declined to estimate when it would be complete.

"Ultimately, it would not be in the interest of justice or in the public's interest for us to rush this process," he said last week.

According to Cahill, his committee of state's attorneys has met twice with Little and has narrowed the scope of the investigation to focus on allegations that, if proved true, would mean the law was broken.

Though he wouldn't identify the focus of the inquiry, Cahill did say this: "If you would like a juicy quote for the record, we certainly have not abandoned an investigation into the MTBE lawsuit collusion claim."

While Little has requested "a significant amount of information" from potential witnesses, Cahill said, he does not have the power to compel out-of-state actors to comply with the requests. That could prove problematic, given that many of those currying favor with Sorrell hail from beyond Vermont's borders.

Also unclear is whether Little has obtained correspondence from Sorrell's personal or campaign email accounts. That could constitute a treasure trove for an ambitious investigator — particularly if he stumbled upon the emails of Lori Kalani, the donor and lobbyist who represented Adelson and flew Sorrell to New York City.

According to records obtained by Seven Days, soon after Chittenden County State's Attorney T.J. Donovan announced in 2012 that he would challenge Sorrell, Kalani — then representing Facebook — emailed the AG's state account to say she had "been following the news" and was "thinking about how I can help." Two weeks later, she asked Sorrell for his personal email address, saying she "would like to talk to [him] about a non work topic."

Wonder what that was.

Little's not the only one looking for answers. Last month, Rutland attorney David Cleary wrote Sorrell's deputy, Bill Griffin, asking him to review the MTBE allegations.

"I think I wanted to express my concern about the way it looked — the appearance of it," Cleary said. Neither he nor Griffin would provide the letter.

Cleary said he was also looking for something else from Sorrell: "some serious self-reflection."

In June, Donovan announced he planned to challenge Sorrell again in next year's Democratic primary. The 41-year-old South Burlington resident recently hired a fundraiser and scheduled a campaign kickoff for October 15.

In an interview last week, before Sorrell announced his retirement, Donovan made clear he planned to raise the issue of campaign finance on the stump by calling for better guidance on how to comply with the law.

"It's clear nobody knows what the law is," he said. "So let's educate. Let's bring awareness."

Meanwhile, influential Democrats and members of the law-enforcement community have been closing ranks around Donovan, who nearly defeated Sorrell in 2012. Last Thursday, former U.S. attorney Tristram Coffin hosted a fundraiser at his Shelburne home with his wife, Lisa Falcone, and attorney Faisal Gill.

"I'm for T.J. and not against Bill Sorrell," Coffin said, calling Donovan "an excellent partner in law enforcement."

Next week, Sen. Dick Mazza (D-Grand Isle), who fashions himself a kingmaker, was scheduled to host a fundraiser in his storied Colchester garage, which is filled with his Corvette collection and a replica diner. Cohosting the event is a who's who of prominent politicos: Sen. Ginny Lyons (D-Chittenden), former senator Jim Leddy, Burlington city councilors Joan Shannon and Dave Hartnett, Burlington Electric Department general manager Neale Lunderville and "Burlington bishop" David Coates.

"T.J.'s well-respected. I think he's got a good shot this time," Mazza said Friday, before Sorrell announced his intentions. "Nothing against Bill, but I've heard he's not running again."

In fact, Mazza said he heard that directly from Sorrell — nearly two years ago. Though the two candidates had previously denied it, Mazza confirmed a long-rumored garage meeting he hosted in the fall of 2013 to broker a truce between Sorrell and Donovan.

Then-secretary of transportation Brian Searles was also there when Donovan promised he wouldn't run in 2014, and Sorrell promised he would retire after that, according to Mazza. Donovan and Searles confirmed the meeting.

"He wanted to do one more term," Donovan said last week. "I said, 'Sure, you want one more? I'll wait two years to run again.'"

In recent months, some have come to doubt Sorrell's commitment to retire, suggesting he might run again to clear his name. Sen. Joe Benning (R-Caledonia), who last week attended a Johnson State College class taught by Sen. Bill Doyle (R-Washington), said Sorrell indicated to students that he might run again.

"He said he'd not ruled out running for reelection," Benning said. "It sounded to me like he was kind of making a statement about the charges lodged against him. He didn't want to leave in that fashion."

But it looks like the AG may end up doing just that. In an interview with Vermont Public Radio on Monday, Sorrell said he'd planned to step down after this term "for pretty close to five years now, actually."

"Now I'm just ready for a different chapter," he explained. "I don't know what that's going to be, but I feel good."

How that decision will affect Little's investigation remains to be seen. In a statement issued Monday, Cahill said that the ongoing inquiry "is a deliberative, truth-finding process that will not, and should not, be affected by today's headlines."

No, it shouldn't. But Vermont is a small, close-knit state — and its leaders tend to sweep the unseemly under the rug.

Little — and the state's attorneys who employ him — will likely feel great pressure to let Sorrell ride off into the sunset with little more than a slap on the wrist. They can achieve that by doing a halfhearted job securing testimony from Sorrell's out-of-state friends and documentation from Sorrell himself.

But if they're not up to the task, perhaps the feds are.

After just seven months on the job, Burlington Free Press "accountability reporter" Paris Achen is leaving the Statehouse beat — and the state. Tuesday was her last day at the Freeps before heading back to the Pacific Northwest, whence she came, to report for the Portland Tribune.

The Free Press is advertising for the job.

VTDigger.org's Morgan True is also leaving the Statehouse — but not the state. According to Digger-in-chief Anne Galloway, the erstwhile health care reporter will be heading north to become the organization's first Burlington bureau chief. Digger has also hired Tiffany Danitz Pache, formerly of Stateline, to cover education.

The original print version of this article was headlined "Bye-Bye, Billy"