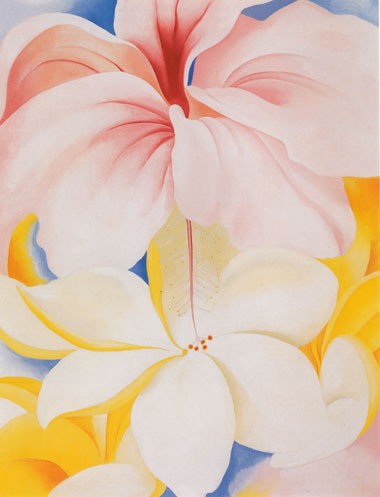 The American West has long claimed painter Georgia O'Keeffe, but the Northeast may have played a part in shaping her unique vision. One of the more seldom-seen -- and early -- paintings in the Shelburne Museum's current exhibit of her work is a 5-by-8-inch purple, blue and white study of Lake George, dating around 1922. She spent many summers there with her partner, Alfred Stieglitz -- photographer, gallery owner and champion of American modernism. Their enduring personal relationship, which included sojourns at the crowded Stieglitz family estate on Lake George, began in 1918.

But O'Keeffe reportedly never really liked Lake George, preferring the wide-open spaces she had discovered while teaching in Texas from 1911 to 1915. In a letter to New York Sun art critic Henry McBride, O'Keeffe disclosed that at Lake George, "Everything is very green. Nothing but green. I look around and wonder what one can paint."

Apparently, she decided on flowers.

On the other side of the Lake George canvas -- O'Keeffe often frugally used both sides -- is a painting of two red poppies. The image was a harbinger of what would become O'Keeffe's best-known series of paintings. Her close-ups of flowers first appeared around 1923.

The paintings in "Simple Beauty" -- remarkably, the first O'Keeffe exhibition in Vermont -- were gleaned from private collections around the country and from public collections including the Philadelphia Museum of Art, the Whitney Museum of American Art and the Denver Art Museum. The aptly titled show includes 24 simply beautiful still lifes, mystical landscapes and, of course, flowers.

The most controversial floral is the 6-by-13-inch oil "Iris," painted in 1926. According to museum staff, the debate is whether the flower portrayed is actually an iris, or whether it's really an orchid, as several horticulturally astute visitors have asserted. Freudian interpretations of the works -- some have alleged that O'Keeffe meant to symbolize the vagina with her flowers -- are not part of the discussion here. The renowned 20th-century artist painted the way she wanted to paint, not as others expected her to, and O'Keeffe's unpretentious originality partly explains why her work continues to have such resonance; her timeless mastery of color and form explain the rest.

Several of O'Keeffe's more typical, and somewhat larger, floral paintings are also included in the show. Her 29-by-36-inch "Purple Petunia" of 1927, and similarly scaled "Hibiscus with Plumeria," painted 12 years later, capture luminous waves of purple and yellow, respectively. O'Keeffe brought the plants to life with languid brushstrokes and subtly modulated hues. Her flowers are the opposite of Van Gogh's -- peaceful and joyous, rather than tortured.

An artist's brushstroke is known as his or her signature, and O'Keeffe's is consistent across genres. "From the Lake No. 3," a 36-by-30-inch composition from 1924, has long streams of olive green running along a bubbly stream, which extends downward from an ethereal mist at the top of the vertical composition. "The Mountain, New Mexico," painted in 1931, two years after first declining a Lake George trip in favor of Taos, depicts a hulking, red-orange hillside; the creases in the mountain look as inviting as the folds of a warm blanket.

O'Keeffe became known as part of the "Stieglitz circle," along with other first-generation American modernist painters including Marsden Hartley, John Marin, Charles Demuth, Arthur Dove and other men. O'Keeffe acknowledged that she benefited from the notoriety of being the only woman in the group. In a 1970s documentary she nonchalantly ascribed her success to "luck" and "being in the right place at the right time." Perhaps so, but her first exhibition at the Museum of Modern Art, in 1929, was critically acclaimed. And during the New York World's Fair of 1937-38, O'Keeffe was proclaimed one of the nation's "12 outstanding women."

The independent-minded painter was never afraid to launch into new imagery, even after achieving success with a distinctive style. "Bob's Steer Head," from 1936, is a cattle skull; it's the sole representative in "Simple Beauty" of O'Keeffe's series of bone paintings, which began in 1930. This one literally renders a bleached skull on a monochromatic tan, 28-by-32-inch background. While some critics of the day dismissed the bone paintings -- even Stieglitz rejected them -- O'Keeffe considered the bones beautiful objects and returned to the subject throughout her life. Eventually critics, including Stieglitz, and the public were won over to her point of view.

"Simple Beauty" includes a few non-O'Keeffe works that put her artistic development into context. An anonymous 1840 landscape, entitled "Crow's Nest from Bull Hill Looking Toward West Point," presents abstracted, curved mountains that seem to anticipate the mysticism of O'Keeffe's flowing New Mexico landscapes. Her 1941 "Turkey Feathers and Indian Pot" portrays a black pot in a shallow, orange-red space; it's hung next to a Santa Clara blackware pot with a turkey feather laying beside it. A gleaming white highlight on O'Keeffe's pot is identical to a reflection on the neighboring vessel.

Then there's "Orchid and Hummingbird," by Hudson River School painter Martin Johnson Heade, hanging next to O'Keeffe's "Iris." The two flowers have similarly large and fleshy petals, and it's easy to see why some intrepid viewers assume they are the same species. But O'Keeffe drew a five-pointed star on the back of "Iris," indicating that she thought it was one of her better pieces, and she scrawled "Iris" under the star. She probably knew what she was painting better than contemporary viewers -- or Freudian art historians -- will ever realize.