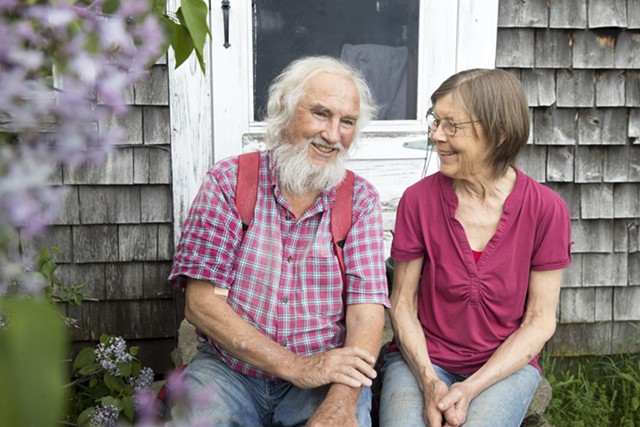 Jack Lazor, a pioneer of organic agriculture and cofounder of Butterworks Farm in Westfield with his wife, Anne, died at home around midnight on Saturday, according to their daughter, Christine Lazor.

Jack, who was 69, was diagnosed with prostate cancer in 2010 and had been on dialysis for seven years for cancer-related kidney failure.

Christine said she and Anne have been touched by the hundreds of tributes they received since sharing on social media last week that Jack was entering home hospice care. She described her father as “just an amazing presence and contributor to Vermont” who “meant lots of different things to lots of different people.”

On the home farm, his daughter reflected with a chuckle, Jack “could be great and super-helpful with his thoughts and opinions, as well as a huge pain in the butt.” Until a few days before his death, she said, he continued to advocate for his priorities: “He wanted to make sure we made cottage cheese out of the skim milk so it wouldn't get wasted.”

Butterworks Farm’s flagship yogurt is made from the milk of its small, grass-fed herd of Jersey cows and sold throughout the Northeast. The farm also produces cream, buttermilk and kefir. Gross sales in 2019 were $1.2 million, Christine said. As detailed in a 2017 Seven Days cover story, the elder Lazors have been gradually shifting ownership of the business to Christine and her husband, Collin Mahoney.

Jack and Anne Lazor were honored in 2019 with a Vermont Agricultural Hall of Fame lifetime achievement award for producing organic yogurt, stewarding the land and advocating for organic agriculture. The couple always worked closely as a team, but Jack was the primary face and voice of Butterworks Farm, building a network of knowledge and mentorship that had an impact far beyond the farm’s products.

In 2013, Chelsea Green Publishing put out Jack’s comprehensive The Organic Grain Grower: Small-Scale, Holistic Grain Production for the Home and Market Producer, which gave even broader access to his expertise.

He was also one of 24 organic farming pioneers invited to California’s Esalen Institute for a gathering of “agrarian elders.” A 2014 New York Times article about the group quoted Jack as saying, “We went out of our way to give everything to the earth, and the earth gives back to us.”

Fellow “agrarian elder” Eliot Coleman of Maine has known Jack for decades. He wrote in an email:

Jack Lazor was always there as a friend and as a pioneer. Jack’s influence goes back to the earliest days of the organic uprising. Organic dairy? Jack did it and produced the finest yogurt ever. Successful organic small grain production in New England? Jack did it. His granary and processing plant were miracles of ingenuity.

Even Stonyfield Farm founder Gary Hirshberg, a competitor in the organic yogurt business, called Jack his hero in an Atlantic article.

Jack grew up in Springfield, Mass., where his father was a chemist for agrochemical giant Monsanto. Already demonstrating skills for growing and marketing, Jack filled a wagon with backyard vegetables and peddled them to neighbors. He went on to earn a self-designed degree in the history of agriculture from Tufts University.

Part of the wave of back-to-the-landers, Jack and Anne started Butterworks Farm on a Northeast Kingdom hilltop in 1976. They bought their first 60 acres with $20,000 earmarked for sending Anne to graduate school. Christine, their only child, was born in 1979.

They never planned to build a million-dollar business. But, as Jack told Seven Days in 2017, “We gradually realized we needed to make a living.”

The couple made yogurt on their stove and sold it to friends and neighbors. “Jack’s such a born marketer. We would make stuff, and he would just go door to door,” Anne told this reporter during a 2008 interview.

Jack relished the variety of challenges in farming. “It’s like going to Las Vegas, but it’s more exhilarating because it’s more direct,” he joked in 2008. “There’s no chance of getting bored.”

University of Vermont Extension agronomist Heather Darby partnered with Jack for 17 years on research and education, traveling with him all over North America and even to Denmark. Darby said that whatever Jack did — whether growing animal forage, developing seed stock for cold climate-hardy corn or teaching an organic grain-growing course at UVM — it always came back to taking care of the land.

“He had so much to offer, and he wanted to offer it,” Darby said.

When she cold-called Jack as a brand new Extension agent, Darby recalled, she was nervous. But “it was like he was just waiting for me to call,” she said. “That’s how he made every single person feel.”

Local farmers of every generation have similar stories. When Marjorie Susman and Marian Pollack of Orb Weaver Farm in Monkton arrived in Vermont in 1980, they read about the Lazors in a farming publication and wrote them a letter to which they received an immediate response. Whenever she spoke with Jack, Susman said, “You got the feeling you were the only person in the room. He was so giving with his information, with the young people he mentored, sharing his love of the land and his cows.”

The first cows at Bread & Butter Farm in Shelburne and South Burlington came from the Lazors back in 2009. Later, farmer-owner Corie Pierce recounted how a colleague called Jack “out of the blue to ask for advice growing grain for pigs. Jack talked to him for two hours straight. It felt like he would drop anything to talk to you.”

Jack thrived on the give-and-take, but sometimes even he needed a break. When he wanted “to chill,” as Jack put it in 2008, he climbed into the observation tower of his granary to relish the view of lush fields, grazing cows and “beautiful compost piles.”

Aside from watching his daughter and her family settle on the farm, little seemed to give him more satisfaction than seeing the rewards of his decades of investment in the soil.

Christine said the family planned to throw a big 70th birthday party for her father in May 2021 and still hopes to celebrate his life at that time. Donations in Jack’s memory can be made to a Northern Flint Corn Consortium and Nulhegan Abenaki Tribe food sovereignty partnership.