Street performers chafe, or cheer, at the rules of engagement on the Marketplace 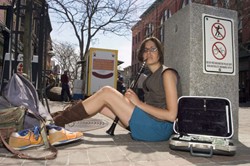 Anyone who lived in Burlington during the 1990s most likely remembers Richard Haupt. Known mostly for playing off-key renditions of Dixieland staples such as "When the Saints Go Marching In," the "Clarinet Man" was a Burlington institution who parlayed his oddball-icon status into an appearance with Phish on Good Citizen Magazine's 1996 compilation, Burlington Does Burlington. Though beloved by many, Haupt's off-kilter playing was not a hit with everyone - especially retailers who had to listen to his limited repertoire for hours and days on end. Were he alive today, Haupt would no doubt face an uphill battle to play on Church Street. He might not be allowed to play at all.

The Marketplace has changed a great deal since Haupt's time. Gone are the days when minimal restrictions meant musicians could simply show up and play for spare change. In an effort to "clean up" downtown Burlington over the years, the city has enacted rules to control who performs there. While the majority of musicians report few problems with the regulations, some feel they are unnecessarily intrusive, over-reaching and misguided.

Zoe Christiansen, 18, is a professional musician who has played the clarinet and saxophone for 10 years and the piano for 14. She graduated from high school at 16 and was emancipated from her parents shortly thereafter. Attractive and talented, she exudes youthful passion, both in conversation and performance. Christiansen makes all of her income from performing, and notes that "the difference between playing on Church Street and any other street is just remarkable." Her first day on the Marketplace, in about an hour and a half, she made "roughly $110," she says. "On any other street in Burlington, $10 an hour is good."

Christiansen's first day was close to her last.

The Church Street Marketplace has a "three strikes and you're out" policy regarding complaints for performers who have, or are working toward, an annual license. According to the official rules and regulations, annual licenses are granted provided that "at least five daily/weekend licenses have been previously obtained, and no documented complaints have been filed during the five separate performing dates."

Christiansen's initial infraction - for excessive volume - came while she was performing on her first day permit. She was given a second day permit but was told a complaint had been filed against her; she was not told by whom. Christiansen was also informed by several members of the CSM staff that her attire was "inappropriate," and that she should reconsider her look.

CSM Executive Director Ron Redmond, 51, conceded there is no mention of apparel, appropriate or otherwise, in the street performer regulations, but he added that CSM staff often make suggestions to performers in an effort to abet their success.

Christiansen was disturbed by CSM's mother-hen approach. "I was wearing shorts that were kind of . . . short, I guess. But I also was wearing a dress that covered the shorts, down to the middle of my thigh, and a vest over that," she explains. "I didn't feel I was scandalously dressed, but I guess [the CSM] disagreed." Furthermore, Christiansen points out, "There is nothing in the rules about attire and, frankly, who the hell are they to tell me what I can wear?"

"They" are the Church Street Marketplace District Commission, a department of the City of Burlington whose primary function is to ensure that the Marketplace is a clean, safe public center. From maintenance to granting permits, Redmond and his staff handle virtually every aspect of Marketplace operations. Collectively, they are the "man behind the curtain."

It's actually a glass door, and the CSM office behind it is where the permit gauntlet begins - with the audition. Redmond claims that auditions have led to a dramatic increase in the caliber of performers. "About five years ago, we felt like we just needed a refresher," he says. "We had some people who were just not very good on the street . . . and realized that we could pull off auditions."

On a recent Tuesday afternoon, four aspiring buskers are lined up to showcase their talents, "American Idol"-style. First up is accordionist Leanna Inzalaco, 22, of Burlington. A talented but introverted performer, she breezes through lilting, original sea shanties, generally avoiding eye contact with the four-person panel. That, according to Redmond, is not uncommon. "The biggest thing we have to do, we find, is we get these really talented people . . . to connect. They have a hard time looking up."

After some prodding, Inzalaco does just that - at least enough to satisfy the panel, and she is granted a permit.

The next contestant is not so fortunate. Mark Johnson, 52, enters the office clutching a small box in his left hand. He fumbles with the case, eventually producing a beat-up harmonica, and proceeds to play a barely recognizable version of "Somewhere Over the Rainbow." From the first warbling notes, it's clear this is not going to be Johnson's day. The staff allows him a full audition before delivering their verdict. Bewildered and embarrassed, he berates Redmond and threatens to sue before storming out of the office. Redmond claims that Johnson's case is the exception, as the majority of auditioners pass.

At least Johnson was spared the next stage of the process: the criminal background check. This serves to deter musicians with a record of wrongdoing from applying, or at least from performing for us law-abiding listeners. Only about 3 percent of applicants are denied permits based on unsavory backgrounds. Today's final auditioner, a talented 6-year-old violinist named Gabo Lewis, presumably passes.

The final stage of the Marketplace busker gauntlet is the five-day trial period, which brings us back to Zoe Christiansen. On Monday, May 7, she went to the CSM office to obtain her third day permit. She was told the staff were too busy, and that they might be able to accommodate her later in the afternoon. So Christiansen decided to play on Cherry Street, hoping to siphon some listeners from the Marketplace. While she was physically off Church Street, her sound traveled there, to the displeasure of cart vendor Paul Buschner.

The 46-year-old proprietor of Amazing Kettle Corn typically sets up shop on Church just south of Cherry. Buschner describes Christiansen as a "rule breaker," who has "only her own interests in mind." He cites several occasions when he's witnessed her riding her bicycle on the Marketplace - another no-no. He further claims the clarinetist was "just sitting, playing scales." Though Buschner normally prefers to speak with offending buskers personally, on this occasion he asked Burlington Police to investigate.

Two officers notified Christiansen that she needed a city permit to play outside the CSM District, defined by the edge of the brick walkway that lines the Marketplace. The incident was reported to the CSM office, which later that afternoon informed her she would not be granted another day permit or considered for an annual license.

Redmond claims that, while Christiansen is no longer allowed to busk on the Marketplace, she is welcome to discuss the matter with the CSM and apply for reinstatement. Christiansen is not convinced, saying, "I'm just so tired of the whole thing. Honestly, they've given me nothing but grief at every turn. Why should I expect any different now?"

She may have a point.

City departments are required to offer an appeal hearing before any license may be suspended or revoked, and must provide the individual with written notice of the hearing at least seven days in advance. According to Redmond, there has been only one appeal during his nine-year tenure. The revocation was upheld. The director points out that hearings are uncommon because most performers are compliant with the rules and receptive to CSM suggestions. He reiterates that Christiansen's case is rare, particularly since she was never granted an annual license. As of press time, she has neither received notice of a hearing nor contacted Redmond.

According to Redmond's predecessor, Penrose Jackson, the original concept for the Marketplace specifically included street musicians, whose input was vital in devising the regulations. Jackson notes that "one man's great entertainer is another's nightmare." But ultimately, she says, "The public will speak."

In the case of John Holland, 57 - who identifies himself as a member of the fictional "Professional Buskers' Union" - the public does speak, often with their wallets. Passersby drop dollar bills in his open guitar case and frequently stop to commend the folk singer's performance in front of Rí Rá. Holland has a positive attitude about Marketplace rules. "Nobody's interested in hearing me play 'Samson and Delilah' for eight hours," he suggests. "The rules force us to mix things up, which is good."

Accordionist David Symons, 29, disagrees. "I don't have a problem with issuing permits, necessarily, but the standards [the CSM] sets are totally arbitrary. They have these regulations, but they're enforced selectively." Symons adds that the CSM "has this attitude that we're somehow employees, which we're not."

Buried in the official regulations regarding Church Street performers - just a few paragraphs after the line stating that a street performer's license "is not an employment contract" - lies a telling contradiction: "The right to act as a street entertainer on the Marketplace is a privilege." While the language of that sentence is confusing, the message is clear: The Church Street Marketplace views street performance not as a right of free expression but rather, as Redmond puts it, as an "amenity."

It's an irony not lost on Zoe Christiansen. "Park benches are amenities," she counters. Actually, for her a park bench would be a luxury. She now spends most of her afternoons busking mere feet away from the red-brick border of Church Street, on less lucrative side streets such as Bank and College. She recently purchased an annual license from the City Clerk's office, which allows her to play nearly anywhere in Burlington except City Hall Park, the Waterfront and, of course, the Marketplace. There was no audition or background check; she was told only that if a storeowner complains, she must be considerate and move along. Says Christiansen, "It was refreshing to be treated like an adult."