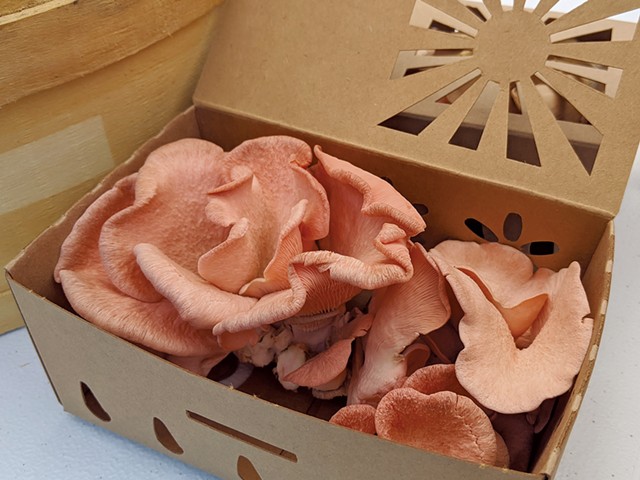 "In the U.S., there's this fear of mushrooms," Kevin Melman told me one morning last month. "Like, if it's not the one that's on pizza, it's probably going to kill you."

Melman is trying to put an end to mycophobia, one mushroom at a time. In August 2019, the 24-year-old University of Vermont graduate founded Funj. Shrooming (pronounced "fuhnj"), which grows and sells a variety of mushrooms from a barn in St. Albans.

Despite his humble headquarters, Melman has built up an impressive operation that yields up to 150 pounds of specialty fungi a week. They are mainly lion's mane and blue, pink and phoenix oyster, along with some rarer types such as chestnut, black king and golden enoki to keep things interesting. He sells the fungi to local restaurants and grocery stores and, this fall, started a 15-week community-supported agriculture program that runs from November through early February.

Melman cultivates his mushrooms on "logs" that he makes by stuffing biodegradable plastic bags with a 50-50 mixture of sawdust and organic soybean hulls. The 10-pound logs are then sterilized and inoculated with mycelium, the vegetative part of the fungi that produces mushrooms. 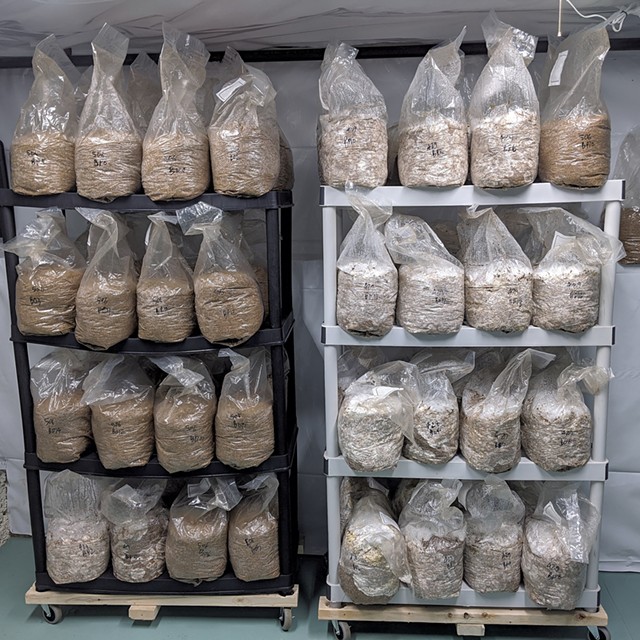 "Mushroom farming is at the core of what I value," Melman said. That is, he takes waste products — sawdust from mills and soybean hulls that would otherwise become livestock feed — and turns them into human food. Then he passes his own waste to gardeners and farmers in the form of compost. "I believe I'm part of the circular economy," he said.

I first met Melman in September at the Champlain Islands Farmers Market in Grand Isle. He was selling boxes of oyster mushrooms at his booth fortuitously sandwiched between Snow Farm Vineyard and Grand Isle Pasta. I bought a box and also ordered a mushroom-growing kit, which I figured would be an entertaining diversion during my family's largely housebound existence.

A few weeks later, Melman delivered an inoculated 10-pound log to our doorstep, along with a single page of directions.

I'm not very good at growing things, so I anticipated the project might be a bust. But I was wrong. After slashing the plastic casing of the log — which enables carbon dioxide to escape and oxygen to get in, essentially shocking the mushrooms into growing — and misting it with water three to five times a day, little peachy-orange "pins" formed. From there, the mushrooms began sprouting. 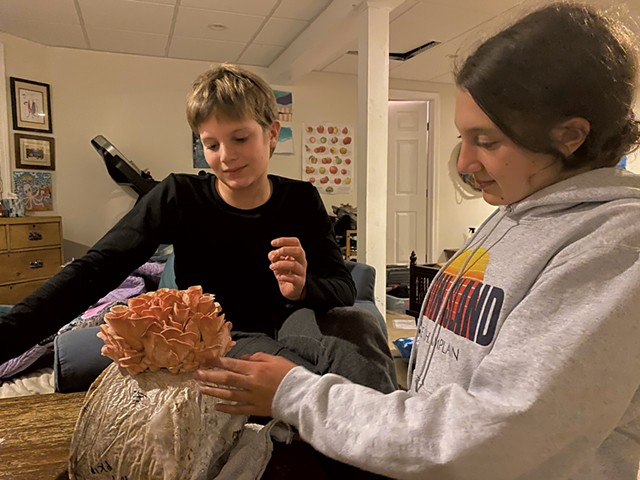 Every morning, my kids raced down to our basement to check the fungi's progress, amazed by how much growth happened each day. After four or five days, we had a beautiful shock of pink oyster mushrooms.

I prepared them simply, sautéed in butter and a little salt. Because mushrooms are about 90 percent water, cooking them shrank our large harvest considerably. When we ate them as a dinner side dish, my vegetarian husband declared, "They taste like filet mignon!" He wasn't wrong.

"Whenever I crave meat, mushrooms are the only thing that can really satisfy it," said Melman, a vegan since college, during a tour of his growing operation in November. Housed in a garage built off of a 120-year-old barn, the space is partitioned into areas that serve different purposes. Near the entrance stands an 85-gallon tubular metal sterilizer, which heats the prepared logs to 204 degrees for 16 hours so that mold spores don't form during the growing process. 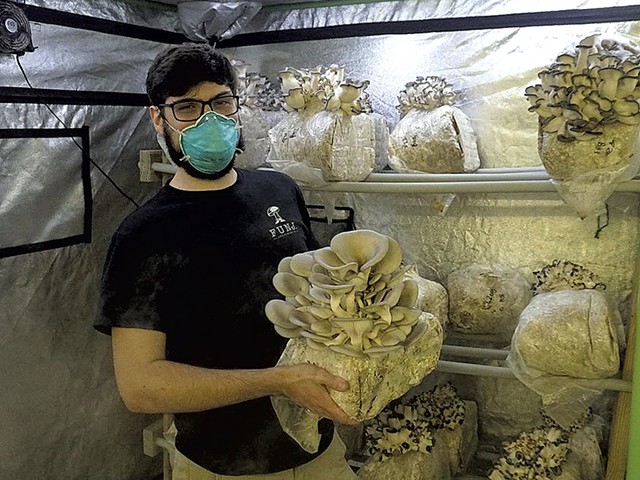 Next, Melman — wearing a face mask, gloves and shoe covers — transfers the logs into a sterile incubation room, outfitted with a flow hood that filters out air impurities. He scoops the mushroom spawn — mycelium on grain that he gets from a supplier in Maine — into the bags, and then closes them with an impulse sealer. In seven to 10 days, the inoculation process is complete.

"Whenever I crave meat, mushrooms are the only thing that can really satisfy it." Kevin Melman tweet this

Finally, the bags are slashed and transferred to a 10-by-10-foot zip-up tent known as the fruiting chamber. Melman keeps the chamber's temperature in the upper fifties, and he runs a fog machine to increase the humidity and a fan to circulate air. Shelves along the sides of the tent are lined with inoculated logs — up to 200 at a time — that Melman harvests in phases. Each log yields two or three flushes, or batches, of mushrooms.

The 'shrooms aren't just delicious, they're good for you, too, Melman said. Research has shown that the fluffy lion's mane has positive neurological benefits. And fungi left on a sunny kitchen counter can actually soak up vitamin D, passing it along to the human who eats it. Because their cell walls are made out of chitin — the same material in an insect's exoskeleton — mushrooms are also a good source of dietary fiber.

Melman has been fascinated with mushrooms since he was a teenager. He developed an appreciation for foraging them while hiking at Dallenbach Lake and Rutgers Gardens in his home state of New Jersey.

"I remember the excitement and danger of my first time eating something I found in the woods," Melman recalled. "I was like, 'No, Mom. Trust me. I swear you can eat this.'"

He moved to Burlington to attend UVM, where he earned a BS in wildlife and fisheries biology and continued to forage. Postcollege, Melman worked at Fiddlehead Brewing in Shelburne for a year — cleaning, packaging, doing quality control and saving money. 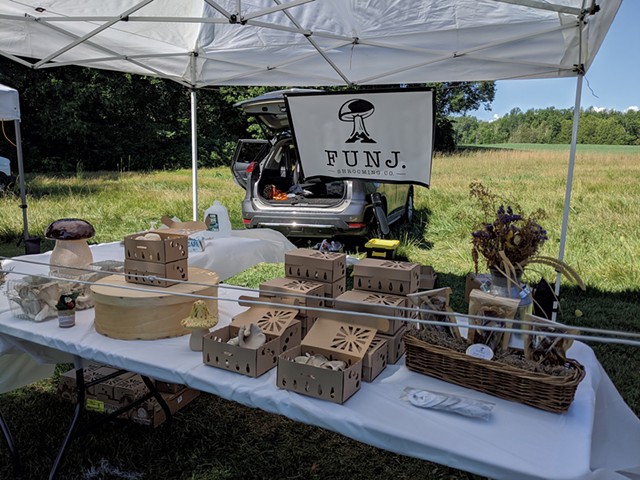 "I really liked it but felt like I was missing something, coming from a more hard-science background," he said.

So, "like a dumbass," Melman recalled with a laugh, he threw his savings into the mushroom venture. At first, he planned to sell his goods exclusively to restaurants.

"I was like, 'Chefs are going to be the ones to show that mushrooms are amazing, and it's going to trickle down, and people are going to get this amazing mushroom dish, and they're going to be like, How do I cook this?'" he said. But then the pandemic hit, prompting him to change his strategy.

Starting in the spring, Melman made home deliveries for a few months, then he hooked up with smaller grocery stores, including Jericho Market, Village Market of Waterbury and Johnson's Sterling Market.

"It might be easy in Burlington to get fancy mushrooms, but further out in Vermont, I was kind of the first guy to bring specialty mushrooms into some of these stores," Melman said. "I'm glad that I'm spreading the word."

He has still managed to forge relationships with some local restaurants, including American Flatbread, Bistro de Margot and Sweetwaters in Burlington.

Sweetwaters chef Jessee Lawyer said that Melman's mushrooms are delicious, with much more flavor and freshness than what you'd find on supermarket shelves. Lawyer started purchasing blue oyster mushrooms from Melman in the late summer and uses them in a risotto dish on his menu. 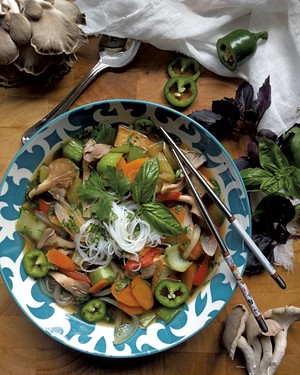 During this tough time for the food industry, Lawyer said, "I wanted to give as much love as I could to local farmers." Plus, he said, Melman is a great guy who's easy to work with.

David Morales Quintana, a vegan chef who co-owns the Dos Feos food truck, initially connected with Melman via Instagram in late 2019. Then, Quintana recalled, Melman showed up at his doorstep one day and started explaining the different ways mushrooms could be prepared. Though a fungi skeptic, he said that Melman's enthusiasm motivated him to incorporate them into his food.

Melman and Quintana are collaborating on a new product — lion's mane mushrooms pressed into thin cutlets, then marinated in a smoky sauce. The BBQ Sh'Ribs, which will initially be sold through online food market Local Maverick, are gluten free, vegan and, unlike many meat substitutes, totally unprocessed, Melman noted.

He also plans to sell dried mushrooms soon and is hoping to expand his grow-kit sales. Melman makes the kits in both 5- and 10-pound bags that cost between $16 and $28, and he can ship them nationally.

On top of everything, Melman and his fiancée are planning a wedding, tentatively scheduled for next summer. And yes, there will be mushrooms in the bride's bouquet, he assured.

The original print version of this article was headlined "A Mushrooming Business | An urban farmer grows specialty fungi in St. Albans"