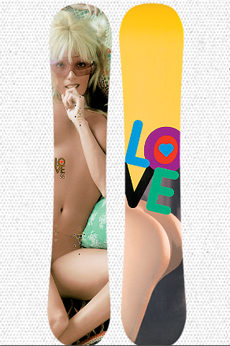 Burlington’s popular snowboarding company, Burton, is catching flack for their new "Love" line of snowboards, which feature Playboy models. Both Seven Days and the Burlington Free Press have picked up on the controversy.

The art, heavily incorporating vintage Playboy model photos onto the snowboard, is under fire from parents and leaders of women’s groups. The board does not show boobies or (va)Jay(Jay) Peak though the women are naked. Though Burton is attempting to market to the 18-24 male range, parents are upset that women are being depicted only in a sexual manner.

Don’t get me wrong, this is an important issue and advertising’s influence on children is a disturbing phenomenon in America. And clearly these are concerned parents who are most likely very involved with the lives of their children. Here lies the problem: How big a deal is this really?