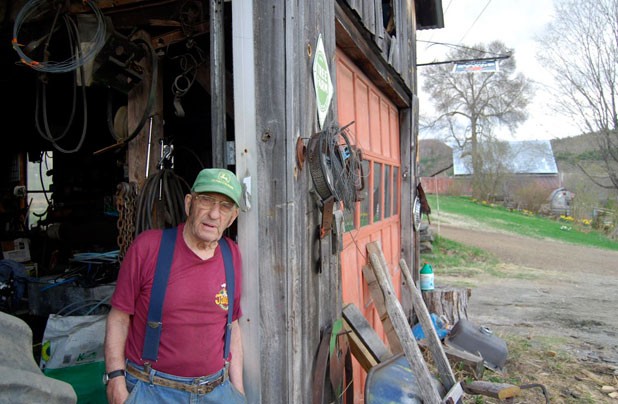 Floyd Van Alstyne remembers that at age 5, more than eight decades ago, all he wanted to be was a forest ranger. Today he owns a 200-acre tree farm and lumber mill and serves as forest-fire warden in Barnard. He figures he came close enough to realizing that childhood dream.

Van Alstyne is a short, spunky gentleman with wrinkled, weathered skin. He wears a John Deere baseball cap and holds his baggy jeans up with a worn leather belt and a set of wide blue suspenders. At 89, he still works nearly every day at his family’s mill on a hill above the tiny village of East Barnard, a forgotten bit of a town squeezed in between North Pomfret and South Royalton.

On a recent Thursday afternoon, Van Alstyne strode through his sawmill, a rambling, cobbled-together operation, and gazed north and east at stands of pines and hardwoods occasionally interrupted by a field. A northwest wind gusted at 30 miles per hour and blew sawdust into his eyes. It hadn’t rained in a long time, and the humidity was low. It was textbook forest-fire weather, which is why the National Weather Service had issued a Red Flag Warning and Van Alstyne’s phone wasn’t ringing with requests for burn permits.

Forest fires don’t get much attention in Vermont; most menace just a few acres and are extinguished in short order by town fire departments. We’re much more excited by the blazes that decimate thousands of acres out west.

But Vermont has had its share of dangerous wildfires. The New York Times covered one in 1883 that burned near Groton Pond and the Wells River Railroad. Provoked by a noontime brush burning and fueled by a gale, it tore through the railroad depot and the water house, consumed 23 cars of livestock and sent men running for their lives. Ulrich T. Baldwin, owner of the mill at the center of the conflagration, “was forced to take refuge in a brook running under the railroad and keep immersed for some time.”

Nowadays, the Vermont Department of Forests, Parks and Recreation tries to keep such mishaps to a minimum by means of the forest-fire warden program it oversees across the state. Nearly every town has a fire warden who is tasked with suppressing local forest fires, maintaining records and reports, and enforcing fire laws. Perhaps the most important of those laws is the one that requires citizens to get a burn permit before torching any combustible plant matter.

Seven Days caught up with Van Alstyne, one of the state’s most senior fire wardens, to find out if Smokey Bear’s warning — “Only you can prevent forest fires” — holds true.

Seven Days: How long have you been the forest-fire warden in Barnard?

SD: What made you want to take on the job?

FVA: I’ve always been in something. When I came back after the war, I was here two years and I was made health officer. In those days, if you had mumps and measles and chicken pox and polio, you had to go over and quarantine the houses. Had to put the quarantine signs on the doors.

From there, I made constable. I was the lister for 16 years. I’ve been a selectman. I was on the regional planning commission for 19 years. Then the local planning commission; this year, I didn’t accept a reappointment. “Christ,” I said, “in three years I’ll be 92, and by then I won’t know much.” I’ve also been on the cemetery commission. Some years I’ve held more than one position. So I’ve actually, if you add it up, given the town over 100 years of service.

SD: What do you have to do as a forest-fire warden?

FVA: The duty of the forest-fire warden is to see that people obey the laws. It says that “You shall not burn after the snow’s gone without a permit.” Can’t burn without a permit, and you can’t have a burn barrel, ever. I’ve got to see that if you ask for a permit, you’re only burning brush. You can’t burn demolition that you take out of the house.

They only pay us $20 a year. It’s a civic thing. The other duty is, if they’re logging, I have the authority to go in and make sure that those logging roads are left open so you can get in there and fight forest fires. I have a book that’s like a traffic-ticket book. If I caught you burning without a permit, I can write you out a ticket, and then you’ve got to go to court. But you hesitate to do that, because the fine is only $25. And I’m not going to appear down in White River because I wrote you out a ticket. I’d rather be like an old sergeant in the Army and give you holy hell.

SD: Do you see much illegal burning?

SD: What does it mean when they say there’s a red-flag warning?

FVA: That means it’s dry, like it is now. The red flag is out now and I won’t give a permit. Windy and dry are the worst conditions. If it’s humid and wet, that’s the best time to burn.

SD: How does one get a burn permit?

FVA: They just call up the fire warden. I ask where it is they want to burn. Get the house number and road, so you know where to direct the fire department. I ask what you’ve got in the pile. Is it a bunch of old mattresses, or good fresh brush?

SD: Have you seen any big fires around here?

FVA: Two years ago there was a fire over there on Mount Hunger Road. The guys worked like heck and got most of it out before it got too bad. Three or four acres, probably.

SD: How do they put the fires out?

FVA: Well, they’ve got the fire trucks, of course. And then you’ve got to have your backpacks and water and rakes and this and that. The more people you can get raking, the better. You try to rake the leaves back, unless it’s windier than the dickens. Then, of course, if it’s really bad, you set a back fire, which is a control that allows you to clean it up before it goes too far.

SD: What’s the most common cause of forest fires?

FVA: Most of the time it’s people. This time of year, you don’t have many lightning storms. It’s people throwing cigarettes out or burning out back. Because, you know, a human being has a natural obsession of getting a fire going and then standing there and looking at it. Goes all the way back to the caveman, doesn’t it?