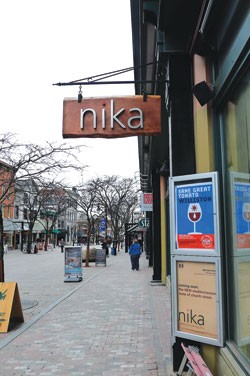 For 21 years, Three Tomatoes Trattoria was a Church Street institution. Now, on March 25, a new era will begin with the opening of Nika.

The new restaurant is the brainchild of the men behind Three Tomatoes, Robert Meyers and Jim Reiman, in collaboration with new partner and operations director Ryan Schmidtberger and chef Dennis Vieira.

Renovations began earlier this winter for a mashup of new and old that features stone and cork walls and a gleaming new bar. The wood-burning oven remains, seasoned with more than two decades of use, but has a new brick face.

Notable as the hip new basement space is, Nika’s biggest deviation from Three Tomatoes is in its cuisine. While the old restaurant focused on Italian flavors, Nika doesn’t stop with those but casts its net farther across the Mediterranean into Morocco, Turkey and Sicily.

Highlighting the Portuguese tastes he grew up with is dearest to Vieira’s heart. “Portuguese flavors are not even new and up-and-coming yet — they’re just good food,” says the first-generation American. Though the chef isn’t yet ready to share his menu, he mentions housemade Portuguese sausages and his grandmother’s octopus recipe. He also speaks excitedly of fare from elsewhere in the world, such as whole, roasted fish with Provençal artichoke stew and homemade ravioli filled with boudin blanc.

Before making his name as a Vermont chef at the Red Clover Inn and Restaurant in Mendon, Vieira cooked in Paris and Tuscany, where he absorbed a respect for product. At Nika, he says, that means using whole, local animals, but also looking beyond Vermont for top-flight products, including carefully chosen wines at affordable prices.

Schmidtberger says he hopes Nika will be a destination for romantic five-course dinners. But he also plays up the wine bar aspect, which includes a menu of snacks such as meaty skewers and housemade potato chips perfect for an evening of grazing.

Once dinner is running smoothly, the team will roll out lunch, which will feature sandwiches of house-roasted meats on oven-warmed Red Hen Baking Company breads. Breakfast service will come next, with high-quality coffee and espresso paired with Euro-style pastries and breakfast sandwiches.

What of the Williston Three Tomatoes Trattoria? While it’s keeping its name, Vieira says he’s also changed the menu there to reflect his simple, local ethos.