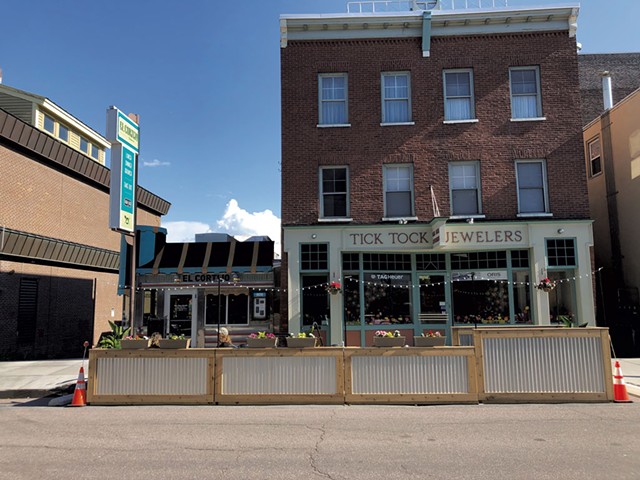 The Burlington Department of Public Works is piloting a program that puts restaurant seating in an unusual place: converted parking spots.

Street Seats transforms parking spaces in front of select BTV restaurants into outdoor seating, furnished with tables and chairs and separated from street traffic by boxlike enclosures. During business hours, restaurants use the areas, which take up no more than two parking spots each. At all other times, seating is open to the public.

So far, Burlington's El Cortijo Taqueria is the only restaurant that has installed Street Seats. The city has also approved the Archives and Poco for the program, and Drifter's participation is in the works.

While the city subsidizes some of the construction fees, each restaurant oversees the installation and maintenance of its seating structure. The DPW will take feedback via a survey, accessed on each structure with a QR code, and email. Public response will determine whether the program continues past the pilot stage, which ends in October.

"We think Street Seats are a visible, effective way to encourage people to come out and enjoy these awesome businesses and enjoy this space," said Robert Goulding, DPW spokesperson. "It's summer in downtown Burlington. Where else would you rather be?"

Jed Davis, who owns El Cortijo, hired a contractor to build the structure outside his Bank Street location. "That particular stretch of Bank Street is sort of dominated by the exterior of the parking garage, and we thought that aesthetically it would be a nice addition to the street," he said. Plus, he noted, it will allow the small restaurant to seat more customers outside.

What about those lost parking spots? Street Seats will take up a mere five of the hundreds of spots in the city, Goulding assured, while maximizing sidewalk space.

"The novelty of this is that we're continuing to keep the sidewalk wide, robust and accessible to all," he said. "It allows us to occupy a spot that might have had a car in it for a couple hours, open it up and make it accessible."