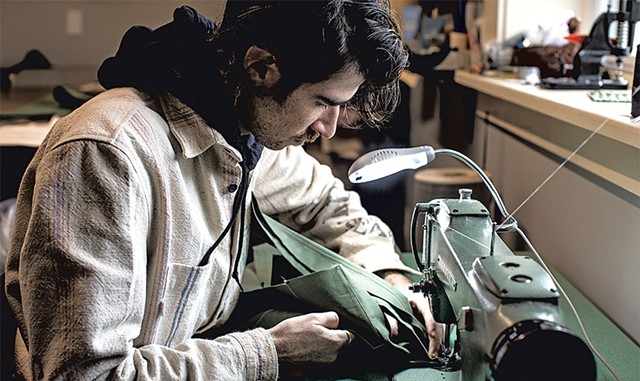 It started with a button-down shirt. Sam Zollman, a freshly minted Tufts University graduate from Brandon, didn't know what he wanted to do with his life. He saw himself as some kind of artist, but he hadn't chosen a medium. He'd always liked fashion as a means of expression, so he decided to learn to sew, starting with an item of clothing that he knew and loved.

Five years later, Zollman, 28, is the designer and sewist behind Slow Process, a Burlington-based clothing line with an ambitious motto: Fixing the Male Uniform. He produces high-quality basic shirts and jackets, as well as one-of-a-kind pieces made from antique textiles, and he's thinking critically about redefining menswear and our modern relationship with clothing.

"Through small makers, I think we begin to value the craft in a larger sense." Sam Zollman tweet this

"I channel the classic menswear silhouettes, but I'm trying to impart on them a beauty and a softness that I think has been absent from menswear for a long time," Zollman said. "I think that there is a broader desire among masculine people to want something beautiful, but they don't really know what that looks like for them."

Zollman took sewing classes in Vermont and in Boston, where he lived for two years. There, in 2018, he designed and sewed his first clothing line. He moved to Burlington shortly afterward and established a studio in the South End's Soda Plant in 2019, filling it with secondhand and vintage sewing machines and huge bolts of fabric. In May of this year, he expanded the studio space to include a showroom.

He has since hired a part-time sewing assistant. Now he's in the midst of releasing a fall line, his sixth, that includes workwear-inspired jackets and smock-like shirts.

In Slow Process' first year, Zollman sewed and sold 15 to 20 pieces, he recalled. Now, he can make that many in just a few months. But he's trying to grow at a sustainable pace, he said.

In late November, he'll launch a limited line of letterman jackets made from handwoven coverlets from the late 19th century. Zollman's passion for antique textiles was already apparent in the garments that dominated his spring/summer collection: baseball jerseys sewn from bright floral tablecloths. He likes taking the sports silhouettes associated with traditional masculinity — "a literal uniform," he said — and adding softness through drape and fabric choices.

"I didn't set out to do a lot of sports-inspired stuff," Zollman said. "But it's such a huge part of masculinity that it's just rife with ways to riff ... that can be a little tongue-in-cheek and can be beautiful and still feel useful to someone."

Brandon Johnston, an actor living in Los Angeles, has bought several items from Zollman, including some of those baseball jerseys. The marriage of sporty familiarity and unique textiles makes the clothes special, Johnston said by phone.

"I know nothing about textile work, but I've always been interested in vintage textiles and vintage in general," Johnston noted. He values Zollman's skill: "His artistic eye is so great."

Johnston also bought a simple white Parcel Jacket from Zollman's most recent line. "I get compliments every time I go out the door in it," he said.

Zollman's clothing isn't just for men. He wants it to be wearable and stylish for people of all genders.

Taylor McVay, Zollman's Massachusetts-based sewing teacher and friend, said it's helpful to think of menswear as a set of aesthetic principles for clothing, not as a category that dictates who can wear it. 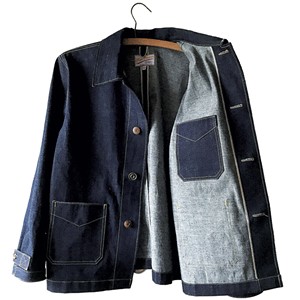 "What I love about [Zollman's] project is, he's creating menswear, but it's menswear for everyone," McVay said. "It's not that you want to negate the idea that there's gender in clothing. It's just you want to free the clothing from strict associations with a particular gender. Anyone can wear menswear; anyone can wear womenswear. They could just be these categories that could be embraced or worn by everyone."

Zollman custom makes his more basic items for the wearer, adjusting his patterns to fit their body. He loves the moment when he gets the fit just right, he said.

A custom-made shirt or a jacket made from antique materials doesn't come cheap. Zollman's made-to-order six-button blouse, sewn from organic cotton, costs between $245 and $285. Though the finished product is the same, shoppers select their price from the scale based on the wage that Zollman will receive for making it: $20 per hour on the low end, $30 per hour on the high end.

"I found that's been helpful — for people to contextualize and understand what goes into the pricing," Zollman said. "The price I charge is directly connected to the amount of hours I put in. If I were talking with a businessperson, they'd think I was insane, but there's truly no reason to add profit above ... what you're paying yourself, as long as you're paying yourself a fair wage."

The more money people invest in an item of clothing, Zollman believes, the more likely they are to fix it when it's damaged rather than toss it. His intentional design choices, such as roomy seam allowances — the excess fabric inside the seams — make clothing easier to alter and repair. Fixing the Male Uniform refers not just to the clothes themselves, he said, but to encouraging wearers to be responsible for the care and repair of their clothing.

Though he's glad that American society is developing a broader appreciation for vintage and secondhand items, Zollman doesn't snub fast fashion. It fills a niche in many people's wardrobes, he said, especially when they're on a limited budget. "You need a plain black T-shirt? Well, I don't make a plain black T-shirt, so you go to H&M."

He sees the workers overseas who sew the clothes that end up in H&M or Target stores as talented sewists in their own right. "The speed at which they produce what they produce, and [the fact] that it fits remotely well at all, is astounding," Zollman said. He hopes that, in a roundabout way, appreciation for his work will inspire appreciation for those other craftspeople and laborers.

"Through small makers, I think we begin to value the craft in a larger sense," he said. "We now have a better understanding [that causes us] to pause and be like, 'Wait, why is that jacket at Target a quarter of the price?' Someone along the way is getting screwed, right, if you know the work that goes into it? It's not that [small makers'] pricing is exorbitant. It's that the other one is incredibly low."

What Zollman sees as the wastefulness of the fashion industry does have a fringe benefit: He and other designers can source excess "dead-stock" fabric that large brands have created but never used. Those fabrics serve as a supplement to the antique textiles he lovingly collects.

"When I make a jacket out of this [type of fabric], I'm introducing someone to a craft that is almost lost," he said.

Lately, mainstream brands have been imitating the look of antique fabrics — for instance, producing coats made from (or styled to look as though they're made from) vintage quilts. Rather than decrying the trend, Zollman sees it as an educational opportunity.

"You get an Urban Outfitters doing rip-offs," he said. "And, if someone were to rip off an antique overshot coverlet, maybe people would have an understanding of what makes the original so much more special, so much more durable. There is no replicating the beauty and spirit of an original."

The original print version of this article was headlined "Well Dressed"