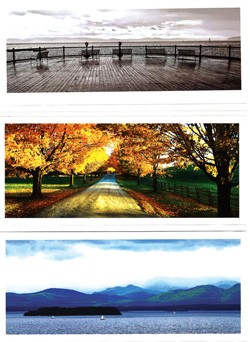 Bill and Benedicte Dodge have always believed that art should be affordable. It shouldn’t be about spending great wads of cash but about, as Bill Dodge puts it, “lifting people up where they need it, when they need it.”

That’s why in 1999 the couple opened Silver Maple Editions in downtown Burlington, where they sold art prints, cards and books. They wanted to offer an alternative to framing, which can be prohibitively expensive, so they specialized in fine-art lamination, or, as Dodge calls it, “Silver Maplization.”

The Dodges will close up shop at the end of this month and begin a new venture called Dodge Studio Arts, through which they’ll sell their own fine-art photographs, as well as original prints by their daughter, artist Madeleine Dodge. “We’re kind of shopped out,” says Bill Dodge. “We’ve been behind the counter for 14 years.”

But they won’t leave the St. Paul Street storefront without art. “We both felt really strongly about this place remaining a gallery space,” Bill Dodge says. So they connected with Burlington painter Katharine Montstream, who will move her studio and shop to the location next month. “She’s a really talented artist who just really knows how to be successful,” Dodge says.

Before moving to Burlington in 1996, Dodge ran a bookstore in Montréal. “We got clobbered by the big-box-store thing,” he says. “It was just murder for the book business.” Around the same time, he and his wife realized that her aging dad, who lived in northern Vermont, could use extra help. So they moved to Burlington with a plan to start a gallery.

“We wanted to run a mom-and-pop art shop,” says Dodge. He knew that for such a thing to survive in Burlington, he needed a good location. After a year of searching, he connected with the Champlain Housing Trust, which had recently renovated the St. Paul Street block across from City Hall Park. He liked the idea of selling affordable art beneath affordable-housing units, so he and Benedicte snatched up the space.

Since then, the couple has run a successful art business, all the while carving out time to take their own photographs, some of which they currently sell at Silver Maple. As photographers, both Dodges are attracted to capturing the Vermont landscape — Lake Champlain sunsets, fields of windblown flowers, Christmas lights reflected on a darkened, rain-spattered Church Street. “It’s all about the magic of light,” Bill Dodge says.

The couple is sad to leave the store behind, Dodge goes on, but excited about what lies ahead: more time to travel and hone their photography skills.

Still want your artwork laminated rather than framed? The Dodges will continue to offer the service at PhotoGarden in South Burlington.