Three months ago, Rabbi Jan Salzman was biking along the Burlington Greenway after hosting a weekly women's Torah group at her congregation, Ruach haMaqom. As she passed the Lakeview Cemetery, she called out to an old friend, "Hi, Crow!" A fixture of Burlington's activist lesbian community since the 1970s, Carol "Crow" Cohen was laid to rest at Lakeview in 2015.

"At that moment, I knew we had to honor [Cohen] somehow," Salzman recalled. "It was because of her that we began the woman's Torah study group."

Salzman first met Cohen in 2014, when the former was assistant rabbi and cantor at Burlington's Ohavi Zedek Synagogue.

"Crow wanted to explore and reintegrate her Jewish background," said Salzman. At Cohen's prompting, a weekly reading and discussion group was launched — and the rabbi leads it to this day.

"It became this chance for primarily Jewish women to get together once a week to wrestle with text," Salzman explained. "Learning the process was a liberating thing for Crow, it really was." 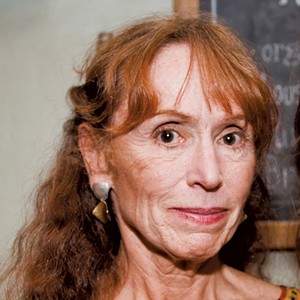 It's fitting, then, that the first event honoring Cohen should center on text. Salzman described the Jewish tradition of Torah study as a process of sinking into "the deliciousness of the dialectic" and "using the text to wake up something that's sleeping."

Cohen was no stranger to soul searching and spiritual awakening. Having moved to Vermont with her then-husband and small children in the early 1970s, she later came out as gay and became an integral part of local LGBTQ and activist circles. She helped found the women-only property Huntington Open Women's Land (HOWL), among many other initiatives.

For Salzman, honoring Cohen is a way to recognize the history of Burlington and to connect her relatively young congregation to its surrounding community through the arts. "Ruach haMaqom" means "spirit of the place" in Hebrew, after all.

"That group of women who are our elders, the radical lesbian women of Burlington, were a really active, vital force [here], and I want to honor them in some way," Salzman said. "I want our congregation to celebrate the local community."

Funds raised through donations at the reading will go toward future Crow Cohen arts events — which Salzman hopes attendees will help to envision.

"I want the people who come here to tell me what they want me to do," she said, emphasizing that attendees of any and all faiths are welcome. "We're living in an interfaith world," Salzman said. "The arts speak our heart."