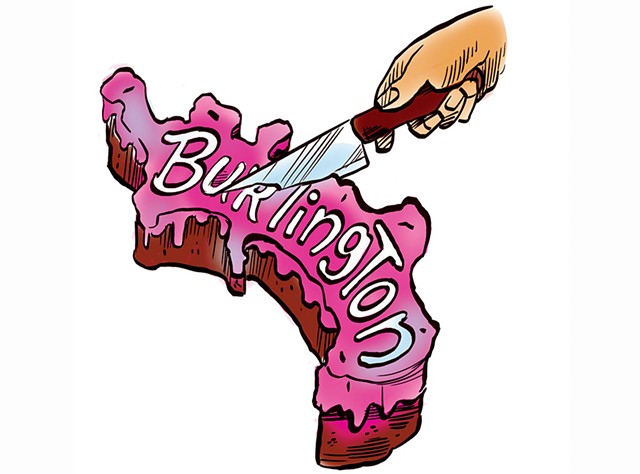 A new crop of Burlington city councilors took the oath of office on Monday, and one of their first orders of business is to decide whether the seats they just won will continue to exist.

Later this month, the council will throw itself into the once-in-a-decade process of redistricting, an exercise in math and geography that will likely rejigger the boundaries of the city's voting districts — and could alter the balance of power. Triggered every 10 years by new U.S. Census Bureau data, redistricting is meant to ensure that voting districts have roughly equal populations. Some Burlington wards have grown faster than others, requiring councilors to redraw boundaries so that, on paper, residents are represented equally. Any new maps would take effect in 2024.

Redistricting is potentially divisive. Members of the city's Ad Hoc Committee on Redistricting, appointed by the city's Neighborhood Planning Assemblies, have complained that they didn't have enough time to solicit public comments and worry that politics could taint the process once the council takes the reins. There's also disagreement over questions more fundamental than how the wards should be drawn, such as: How many wards should the city should have? City officials, however, promise a fair process and plenty of opportunity for the public to weigh in.

For some, the early debate is reminiscent of the city's contentious reapportionment last time around, which was marked by criticisms that it lacked enough public involvement. At that time, officials took a year and a half to hammer out the configuration of eight wards and four districts that exists today.

Whatever the council decides will affect elections for a decade or longer. In a city where the council is roughly split between Progressives and Democrats, any shift in the voting system could determine which party wields power.

Councilors have to act quickly: They have just three months to prepare a proposed map for the November ballot.

"They can certainly consider anything," city attorney Dan Richardson said. "[But] the key linchpin here is creating a system that can get past the politics of a divided council and sustain a majority of votes."

Since 2015, Burlington has been divided into eight numbered wards and four districts — North, South, East and Central — each with its own representative, for a total of 12 councilors. Each district is composed of two wards, so residents have two elected officials: a councilor from their ward and another from their district.

Redistricting is mandatory when settlement patterns shift significantly. Since the previous census, Burlington's population has increased by 5 percent, to nearly 44,750 people. Because the growth wasn't evenly distributed, some of the city's eight wards now have more people than others, a violation of the principle of "one person, one vote" that ensures equal representation for everyone.

If Burlington's population were evenly distributed, each ward would have about 5,593 people. But several have strayed from that magic number. For example, Ward 1, the city's easternmost district, has grown to 6,247 people, or 682 more people than a decade ago. At the same time, Ward 7 in the New North End has dropped slightly to 5,051 residents. The shifts mean that both wards are now about 10 percent off the ideal size, leaving the city's voting system ripe for a constitutional challenge.

The city called together the committee last September to gather public sentiment about the current ward and district configuration through surveys and listening sessions. The group, made up of one person from each ward appointed by their respective Neighborhood Planning Assembly, issued its findings in January.

The committee's conclusions echo concerns that city officials have heard for years. Chief among them was deep dissatisfaction with Ward 8, an area that includes college student-heavy neighborhoods downtown, the University of Vermont residential campus and University Heights. Long-term residents there have complained that their voices are too easily drowned out by students, whose numbers can decide elections — and ultimately the council's balance of power.

Control of the council was at stake in last month's elections, and many saw Ward 8 as the deciding race. UVM seniors Ali House, a Progressive, and Hannah King, a Democrat, vied for the seat held by Prog Jane Stromberg, who didn't seek reelection. In the closely watched contest, House won by just 43 votes, maintaining her party's six-person plurality on the council.

Public comments on other topics were divided. Most people favored doing away with the council's district seats, saying councilors representing two wards are not as connected to constituents. But others said district councilors tended to view policies through a broader lens and proposed that some councilors be elected citywide. There was also no agreement on an ideal number of councilors or wards.

Consensus was also elusive during the city's last reapportionment. Following the 2010 census, the city formed a redistricting panel consisting of Mayor Miro Weinberger and four city councilors. Along with concerns that those in power were setting the rules, residents voiced complaints that the public wasn't being heard. The council formed another committee, but it also foundered.

The council endorsed a map in December 2013, and it won voter approval the following March. Because voting districts are written into the city's charter, though, the state legislature and then-governor Peter Shumlin also had to approve the new configuration. It finally went into effect in March 2015 — nearly three years after the process began.

Burlingtonians harbor bitter memories, and some people involved this year say they worry that elected officials will once again have too much control over the process. In memos attached to their final report, several members of the committee complained about the lack of public input and said the city didn't give them enough time or resources to obtain more.

"If we had 50 different voices total, including the committee, I'd be surprised," Jim Holway, the committee's Ward 4 representative, told Seven Days.

Holway said participation may have been higher had the committee been allowed to propose different ward maps. Instead, a city staffer will draw up proposals for the council's consideration. Holway served on the redistricting panel a decade ago and said the controversy had one unintended benefit: It encouraged more people to get involved. He fears that the city's current attempts to ensure smooth sailing by leaving map-drawing for later may have dimmed public interest.

"All well intentions aside, the way it played out was: No controversy, nobody cared, nobody came, nobody learned anything new," Holway said.

Fellow committee member George Love, a Ward 2 resident, said the survey questions were too broad and agreed that proposed maps would have helped the discussion.

"You can talk in the abstract about what kind of things we want to prioritize in our redistricting process," Love said, "but in the end, unless people are looking at a map and seeing, Oh, my house just got moved into a different ward, people aren't necessarily going to understand the impacts."

Richardson, the city attorney, said the council directed the committee away from preparing maps because those deliberations might soon have been rendered moot once the new council took over. He also said that the committee's research represents "a very robust amount of information" for future discussions. The public will also have the opportunity to speak when the council takes up the matter, he said.

"For me, expanding the size of the council is a nonstarter." Councilor Joan Shannon tweet this

Plenty of debate is anticipated. A group of 30 mapping enthusiasts has already begun advocating for a dedicated downtown ward, which the city lost in the 1960s. Today, the area is lumped into Ward 3, which also includes a large portion of the Old North End.

"In the 20-plus years that I've lived in the city, I cannot think of a single time where Ward 3 has elected a city councilor who lived south of Pearl Street," Haessly said, referring to the symbolic line dividing downtown from the Old North End. "The feeling among people who live in downtown is, We're an afterthought."

The group is also pushing to have eight wards with two representatives each, for a total of 16 councilors — an idea that also came up in the committee's survey. The concept is that residents would be better represented than with district-level seats.

Even though she holds one of those seats, Councilor Joan Shannon (D-South District) isn't a fan of the district system and was one of five councilors to vote against it in 2013. Still, Shannon thinks that residents would be better represented with 12 councilors than 16. She fears that adding four councilors would make meetings longer; it also wouldn't address concerns that an even-numbered council creates avoidable stalemates. Shannon said a well-functioning council should have five to nine members.

Shannon tossed out a few other configurations — four districts with three councilors each, for instance.

"I don't have my heart set on a particular solution," she said, "[but] for me, expanding the size of the council is a nonstarter."

Councilor Jack Hanson (P-East District) also favors nixing districts such as his. District councilors have twice as many constituents as their council colleagues elected by ward but are paid the same $5,000 annual stipend and have no extra authority. They also must campaign in two wards, which can be more expensive and take more time, he said.

Hanson proposed having 12 wards with one councilor each. Smaller voting areas would lessen the workload for each councilor and encourage better connections with constituents, he said. Elections would take place on a smaller scale, which Hanson said would ease entry for grassroots candidates.

"We could still have the same size council but have much better representation and just [a] more democratic system," he said.

City officials plan to kick off the redistricting process at the council's April 25 meeting. Richardson and planning director Meagan Tuttle will brief councilors on the process and gauge whether they're interested in making minor tweaks or wholesale changes. Councilors have until July to make a final decision — though, as with any council resolution, the mayor will have veto power.

"It will be interesting to see how they choose to address this," Richardson said, "and what appetite for adventure they have."

The original print version of this article was headlined "Redistrict Repeat?"