Burlington’s PCB Problem Could Impact Other Schools Across Vermont

Shortly after Burlington High School closed last September because of high levels of airborne toxic chemicals in its tech center building, district Superintendent Tom Flanagan got what he thought was encouraging news.

"I thought, OK, we're going to be able to get back in here," Flanagan said. He even made what he called the "rookie superintendent move" of telling the girls' soccer team that things looked good for a return to campus.

Eight months later, Burlington High School students still haven't returned to the Institute Road campus — and they likely never will. Last week, the school board voted unanimously to abandon a $70 million renovation project and switch gears to a total rebuild of the school at an as-yet-unknown location.

"I have very little confidence that we'd be able to get back into a safe building," Flanagan said in an interview with Seven Days the day after the school board's vote. Remediating the chemicals would have had a price tag of about $12 million and would not have guaranteed a PCB air concentration below the state's recommendation.

"That was too big of a risk," Flanagan said.

But some experts who spoke with Seven Days think that the district's approach is overly aggressive. Furthermore, Vermont's stringent PCB air-screening levels — the lowest in the country — could complicate a future statewide testing initiative.

"As a toxicologist, I worry about lead and other heavy metals with regard to children's health," Laura Green, president and senior toxicologist of Green Toxicology in Brookline, Mass., told Seven Days in an email. "I do not worry about PCBs, and I would never recommend demolishing the school at issue."

Last fall, a group of vocal parents, too, thought the risk of PCBs was overblown. They pushed the district to reopen the school, citing the wide differences between the federal PCB standards and Vermont's. Some of those parents, fed up with remote learning and a lack of progress, transferred their students to other schools.

One parent, data scientist Greg Fanslow, previously worked as a water-quality regulator in California. Environmental regulation has to be a thoughtful process that weighs the human and economic costs against the theoretical benefits of reducing exposure to toxins, he told Seven Days recently. Vermont's PCB screening guidance is so low "that it creates huge other consequences for the economy and society."

Vermont adopted its PCB screening level in 2013. According to the EPA and other experts in the field, it's the only state in the country with a level different from the federal standards. Sarah Vose, the state toxicologist, said the low level is meant to lessen exposure to the chemicals by using worst-case scenarios.

The EPA, for instance, calculates its screening level by considering the average time students and staff would be in school and exposed to PCBs — between six and eight hours a day for 180 to 185 days, roughly corresponding to the school year. Vermont, on the other hand, bases its risk assessment on the maximum time students and staff could be in such a building, which the state says is 11 hours per day for 250 days — much longer than the school day and the school year. The EPA considers an excess cancer risk of one in 10,000 to be negligible; Vermont sets the negligible level more stringently: one in 1,000,000. The Vermont Department of Health also took into account the noncancerous health effects of PCBs, Vose said. 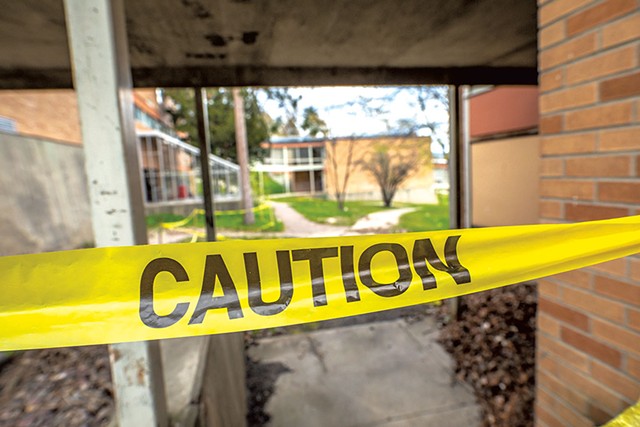 PCBs were widely used in construction materials until 1979, meaning dozens, maybe hundreds, of Vermont school buildings could have high airborne levels of the chemicals. State Sen. Phil Baruth (D/P-Chittenden) acknowledged as much in March, when he attended the grand opening of Burlington's temporary high school, inside a former Macy's building downtown.

Burlington, he said, is "a canary in the coal mine for the state of Vermont." The legislature's budget proposal — which has not yet been approved — would allocate $4.5 million toward a voluntary airborne PCB testing program for all public and independent schools.

During the 2013-14 school year, Vermont tested for airborne PCBs at four schools, including Champlain Elementary in Burlington. The tests found PCBs ranging from 27 to 65 nanograms per cubic meter in four locations at Champlain. The health department issued a series of recommendations, including replacing older or leaking light ballasts and wet-washing the walls and other hard surfaces.

"No further action was needed at these schools because the levels of PCBs detected are not expected to contribute very much to an individual's exposure," a 2014 health department memo to school administrators stated. The memo explained how schools could go about deciding whether PCB testing was warranted, but added, "Unfortunately, there is no state or federal funding available at this time to assist with sampling and/or remediation."

If Vermont does begin a broader PCB testing initiative, it will want a plan for what to do when it finds high levels, said Jim Okun, an environmental toxicologist at Massachusetts-based firm O'Reilly, Talbot & Okun Engineering. For the last five years, he's worked as a consultant for Worcester Public Schools, the second-largest district in the Bay State, helping to remediate PCBs in its buildings. Rather than tear down buildings, the district has taken measures to mitigate or remove the PCB-laden materials and improve air-filtration systems. It's come at a cost: Worcester has spent more than $50 million on the project.

Vermont's 15 nanogram screening number is "an extremely low level, and I think it's going to be a very hard level to hit," Okun said. "I think the EPA goal is actually a pretty aggressive goal already."

"The situation in Burlington is so alarming because it's not an unreasonable decision, but it's completely unaffordable." Keri Hornbuckle tweet this

University of Iowa professor Keri Hornbuckle has researched PCBs for decades and thinks any exposure to the chemical is bad for kids. The EPA calls them a probable human carcinogen, while the World Health Organization goes further, classifying them as a known carcinogen. They can cause other detrimental effects to the immune, endocrine, reproductive and neurological systems.

But, Hornbuckle said, PCBs were used in "such tremendous quantities," especially in many schools built between the 1950s and late 1970s, that it is difficult to support tearing down a building because of PCB contamination.

"The magnitude of the problem is not just about the toxicology, unfortunately," Hornbuckle said. "It's about the practical steps that we can take to get our exposures down or eliminate the exposures."

Hornbuckle said that Burlington High School's PCB levels "are probably rather typical" for schools built in the middle part of the 20th century.

"The situation in Burlington is so alarming because it's not an unreasonable decision, but it's completely unaffordable," she said. "The whole country can't replace all of our schools that were built during that time, can we?"

Some of Hornbuckle's research involves finding affordable and effective ways to remediate airborne exposure to PCBs in schools. She thinks Vermont's PCB screening levels are "a reasonable goal" but suggests thinking about the 15 nanograms per cubic meter as a target, rather than the criterion.

"The state's definitely going to be thinking hard about this if [Burlington tears down its high school] because, indeed, what are you going to do with the other schools?" she asked. "But the answer is not changing the guidance. The answer is, 'How do you deal with that information?'"

Burlington has already made its decision.

Extensive testing has found even more contamination, including in more building materials and a few inches deep into the soil on campus. Some school board members speculated that soil contamination could complicate building anew there, but Flanagan said the district hasn't ruled out using the current site. Regardless of where the school goes, he's convinced that a new building is the best option.

"I feel more and more comfortable with the decision, and I'm less questioning the difference between the Department of Health's screening values and the EPA's screening values," Flanagan said. "But I also feel a responsibility to make sure that our staff and our students feel safe. And if Vermont Department of Health is telling us it's not safe, and they've shepherded us through a pandemic to keep us safe ... there's no way that we're going against that."

"It's a devastating decision," said School Commissioner Martine Gulick, who cochairs the board's facilities committee, "but at the same time, it felt like it was 100 percent the right thing to do because we don't see that there are a lot of options to move forward, to be perfectly honest."

"We have to go by the guidelines that are set by the state," she added.

The health department and the Vermont Agency of Education have both expressed support for Burlington's decision.

"We have confidence that the district's thoughtful deliberations drew upon our science-based information," health department spokesperson Ben Truman said in an email. "Our concern, and our guidance for the school district, is rooted in the health risks associated with exposure of students and staff to PCBs in the high school's indoor air."

"It kind of boils down to some practical decision making on the part of the district," French said. "More information kept coming in that pointed to new construction probably being the better approach."

Where the new high school will go and how the school district will pay for it are two looming questions. Flanagan said the district might consider selling property or buildings — including the high school's Institute Road campus — to offset the costs of both a new build and the PCB cleanup, which the district will be responsible for whether or not the school stays on the land. The district would likely seek state and federal money, as well.

"I would say we're definitely all concerned," Gulick said of funding the project. "A new high school is expensive, so, yes, it's a very daunting task ... but, as Tom has been saying, this is an opportunity for us."

Flanagan said the district would assess various sites to decide where to build. Extending the lease at the Macy's building during construction is a possibility, but Flanagan hopes it isn't necessary. He does like the idea of building a downtown school to capitalize on "the opportunities for deeper learning that exist when you have a school that's embedded in the heart of the city."

"We have to figure out what site can deliver the best school for our community," he said, "and what site can do that at the lowest cost and at the fastest rate."