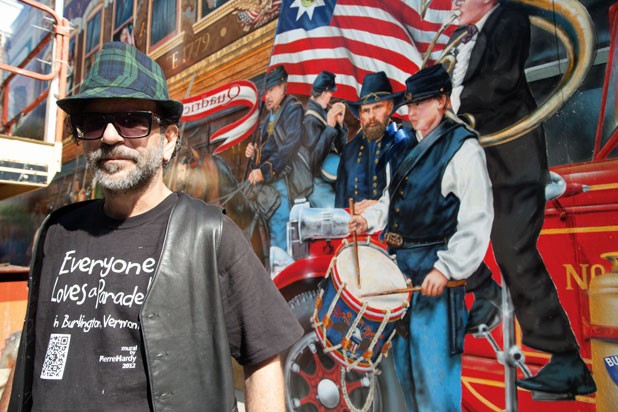 For Québec artist Pierre Hardy, painting panels in a converted Essex garage for the past nine months may prove to have been the easy part of his epic mural project, titled “Everyone Loves a Parade!” for downtown Burlington.

Hardy, 50, is now spending his days riding up and down on a hydraulic scissor lift in an alleyway off the Church Street Marketplace. There, he and contractor Steve Schaefer, along with a few helpers, have so far installed 40 of the 64 panels that will make up a whimsical, trompe l’oeil rendering of 400 years of Vermont history.

The 124-by-16-foot mural could be fully in place by next Monday, August 6, Hardy reckons. But that timeline depends on the weather and the attitude of Vermont regulators, who, the bearded Montréaler complains, have been hassling him and Schaefer about work-site issues.

“They were asking questions upon questions,” Hardy says, frustration apparent in his tone and facial expression. “We had to stop working until we got clarification.”

Those problems, mainly involving the definition of a subcontractor and eligibility for workers’ compensation, have now all been resolved, and installation of the mural can continue on schedule, says Marketplace executive director Ron Redmond.

“I just want to deliver my baby,” Hardy says from atop the scissor lift. “It was supposed to be done by April. Then by July. But, as you can see, I’m still here.”

The official dedication is now planned for August 29. That date was set mainly to accommodate the schedule of Sen. Patrick Leahy, an important backer of the project, Redmond notes.

In addition to satisfying regulators’ concerns, Hardy has had to pause from his labors to respond to queries and complaints from passersby. He tells of a recent encounter with someone claiming to represent Vermont’s Abenaki. According to Hardy, the person accused him of distorting the appearance of the native figure who stands near Samuel de Champlain at the start of the imagined parade of Vermont notables.

“I can perfectly well defend my concept and content,” Hardy says in his recounting of that conversation. “I told him that when Champlain came, he met Québec natives, not Vermont natives, and that is how they looked. I have done the research. I also said I understood that their culture has not been fairly portrayed for so many years.”

The visitor was appeased by that response, Hardy relates. But soon the artist was confronted by an African American who described himself as a 30-year resident of Vermont. That man wanted to know if black people were going to be represented in the mural. “I told him there are definitely going to be black people. I told him also that I know for you the long fight is not over.”

Every day, scores of pedestrians moving between the Marketplace and its parking garage pause along the chain-link fence currently enclosing the mural and talk and gesture excitedly to one another. It seems everyone may indeed love Hardy’s parade ... once it finally gets going.