Burlington’s Monarch & the Milkweed to Rebrand and Relaunch Kitchen 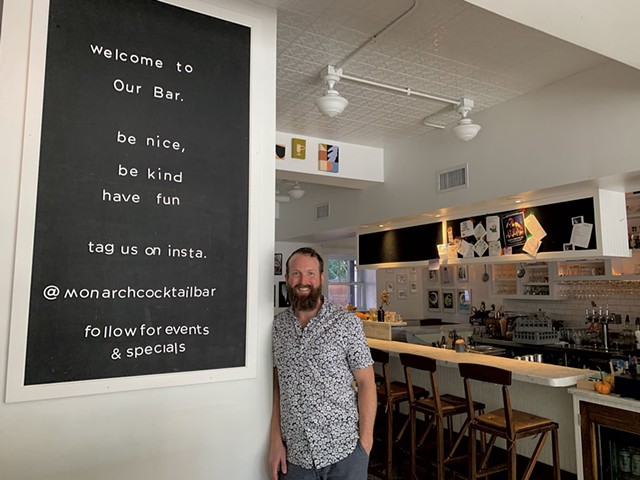 Downtown Burlington's buzzy Monarch & the Milkweed will serve its last egg-white-crowned Tonka Puff and butterfly-garnished Monarch cocktail the weekend after Thanksgiving — but the bar will go on.

During December, the current team, led by operating manager Taylor Watts, will run the venue under a temporary moniker, Devil Takes a Holiday Cocktail Lounge. It will offer a holiday-themed cocktail menu, an expanded wine program with more bottles available by the glass and food cooked on-site by guest chefs, Watts said. In January, the bar will relaunch with a yet-to-be-determined name, a minor renovation that will add more bar seats, and completely new drink and food menus.

While details are still in the works, Watts said, "We are still focusing on being the best cocktail bar in Burlington — if not Vermont — with cool, exciting, approachable food and drinks."

Watts, 36, moved from New York City to run Monarch with its pastry chef owner, Andrew LeStourgeon, when the bar reopened in September 2021 after an extended pandemic closure. Monarch never revived its original food menu and has since served mostly pizza and salad from next-door American Flatbread Burlington Hearth.

On Thursday through Saturday nights in December, chefs Taylor Adams and Forest Hanson, who work for Huntington-based the Hindquarter, will launch a new venture called Hambone at the holiday-themed cocktail lounge. They will focus on "small dishes for easy snacking," Hanson wrote via text, such as tandoori fried chicken, kabocha squash dumplings and pickled shrimp toast.

As of the new year, Watts will become a part-owner of the bar, he said. Before moving to Vermont, he was beverage director for a New York City restaurant group that included the bars Oscar Wilde and Lillie's Victorian Establishment.

Watts said LeStourgeon now exclusively focuses on his Milkweed Cannabis Confections, an independent operation. The bar, pizza restaurant and confection business are all connected through the involvement of Third Place, a Burlington-based strategy and funding partner for food and beverage entrepreneurs.