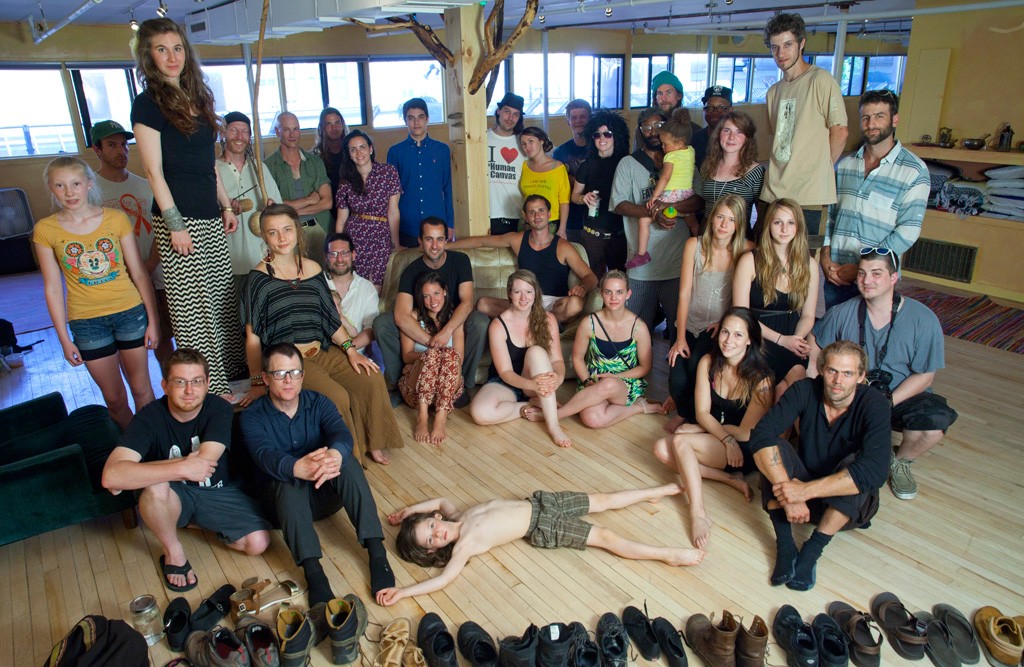 Lounging on a futon in a low-lit recording room, Tommy Alexander ponders the meaning of "jenke," a purposeful misspelling of "janky."

"It's more of a metaphor for [how] you define the world that you live in," he says. "Something could be 'jenke' because it's falling apart, or you could come into this beautiful space and somehow that could be 'jenke,' too. Write your own story. That was the first slogan that I pushed."

Since 2012, Alexander and his business partner, Matt Mantone, both 28, have been helping people tell their stories through Jenke Arts, a nonprofit organization and sustainable artists' collective. At its multipurpose Church Street space, Jenke offers a low-cost recording studio and a donation-based array of dance, martial arts and visual arts classes.

In the past two years, Jenke has grown from a cramped, two-man recording outfit to a Burlington buzzword.

"Initially the idea was just to get a bunch of friends together and support each other through collaborating and promoting each other's shows," Alexander recalls.

Alexander, who hails from Santa Barbara, Calif., is also half of local indie-folk duo Quiet Lion. He and bandmate Alanna Grace Flynn released their first full-length album, Whatever You Say, on Jenke in 2013 — though it was recorded at Ryan Power's Stu Stu Studio in Colchester. Mantone, a native Vermonter and University of Vermont alum who hopped around the Burlington production industry for years, also runs his own massage-therapy practice.

When Alexander and Mantone met in 2010, the latter owned a studio on Manhattan Drive and wanted to move the operation to a more secure location with serious business partners. Meanwhile, Alexander had already begun the original Jenke Records. In August 2012, the duo moved into a corner room of the current space at 19 Church Street — separated into three rooms at the time. There began the nonprofit recording aspect, which has produced more than 20 albums to date.

Their business model was cheap — in a good way. They wanted to offer an affordable recording space where artists who are able to pay in full, others pay what they can and some pay nothing at all.

"We never thought we would open a recording studio to make a bunch of money," Mantone says. "Tommy and I feel that the rent being covered is more than enough compensation."

In that spirit, Jenke has always sought to showcase little-known acts that need a boost.

"The main service being offered was just to record something for people who needed something to help them, just for momentum," Alexander elaborates.

After focusing solely on recording and amassing a slate of talented artists on the label, Alexander and Mantone expanded their tiny studio to encompass the original three rooms of the flat. Jenke Records was rebranded into Jenke Arts, a self-sustaining artist collective with shared responsibility and purpose.

This May, Jenke offered more than 90 classes, workshops and events chosen or suggested by the community, totaling 160 hours of creative opportunities. Instructors are charged $10 per hour for use of the space. For a yoga teacher offering a one- or two-hour class, that comes to $20 or less, which the instructor easily makes up for in student donations. More importantly, Jenke strives to offer educational experiences for both teacher and student at any stage of the creative process.

"My whole vibe — and Tommy and I have similar vibes — is I really want to offer something to teachers as a ground for them to be able to make a real living," Mantone explains.

Both he and Alexander agree their credit begins and ends with forming Jenke and offering the physical space.

"'Co-directors' is a good word for what we do," Mantone says. "But we really want to give a lot of praise to the people involved, because Jenke would be nothing without the team that we do work with."

In particular, they cite Michael "Tree" Sampson, who plays didgeridoo on Church Street, as a source of inspiration and help.

"He is very much a beloved figure and benefactor of this place in many ways," says Mantone, adding that Sampson chose the studio's color scheme, a golden yellow shade called Lion's Heart.

While Alexander and Mantone are quick to dish out praise to friends and patrons — including intern Angela Fontaine, who handles scheduling and finances — Jenke draws its spirit from the founding duo. Their combination of recording and booking experience, local connections, musical talent, entrepreneurial instincts and genuine interest in giving back has resulted in a niche arts hub with staying power.

In a display of Jenke's rise to local prominence, the team will be manning the barn stage at Frendly Gathering, a three-day music festival this month in Windham, featuring acts such as Delta Spirit, Deer Tick, Moon Hooch and Kat Wright & the Indomitable Soul Band. Jack Mitrani, Frendly's founder, says the Jenke partnership will help bring the festival to new spiritual and musical heights.

" target="_blank"The minute I walked in, I was amazed by the magic and positive vibrations of their community and the sounds that day [at the studio]," Mitrani says. "This last week we took our entire Frendly crew to the Jenke studio to learn about how they cultivate creativity and where we can innovate."

After that whirlwind event, Jenke's next move is finding more permanent financial backers so the collective can grant teachers, artists and musicians scholarships to grow in their craft. They would also like to hold charity events and develop a permanent, paid staff.

As Jenke expands its creative catalog into open mic nights, children's art classes and world dance sessions, fans might fear that the "little recording studio that could" will lose some of its hard-earned status. Alexander and Mantone admit they would like to de-emphasize, but not entirely eliminate, the recording aspect in favor of other offerings.

But this development may be positive for both the collective and the community it serves. Jenke is, at its core, about the regenerative spark that comes from learning and creating together.

As Alexander observes, "There has to be a start. And this is a good place to start because it's [mostly] free and it's not a high-pressure situation, and we've had a lot of beautiful things come out of that environment."

The original print version of this article was headlined "Collective Appeal"