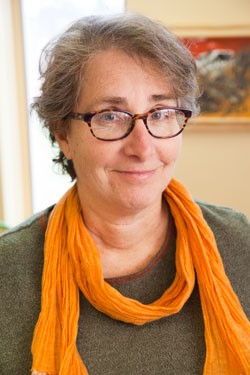 With the state’s mental health system in disarray, Vermont is experimenting with a radical form of therapy to treat patients with the most severe psychoses.

State officials have been exploring various options for replacing in-patient psychiatric beds since Tropical Storm Irene wiped out the state hospital in August 2011.

A new psychiatric hospital in Berlin and four other facilities around the state are part of that plan. But the Shumlin administration wants to keep people out of the hospital in the first place and reduce the need for costly psychiatric beds.

To that end, the Vermont Department of Mental Health has awarded a $15,000 grant to Burlington’s HowardCenter for a pilot project — the first of its kind in Vermont — that will train staff in a form of therapy called Open Dialogue. The method replaces antipsychotic medication with a form of talk therapy that involves not just patients but their family members as well.

Leading the project is Dr. Sandra Steingard, the HowardCenter’s medical director of mental health and substance abuse services. For much of her 30-year career, Steingard largely accepted the mainstream thinking of the American psychiatric community — that antipsychotic medications are a critical tool in treating people who are delusional or hearing voices.

But Steingard and a small team of HowardCenter clinicians are now treating people with schizophrenia and other psychoses in their homes with minimal use of drugs.

The Open Dialogue method was first developed in the 1980s in northern Finland, where it’s reduced the number of people in psychiatric hospitals, on disability and taking pharmaceuticals. Most remain symptom-free for years. Open Dialogue, which Steingard believes could also reduce Vermont’s dependence on costly in-patient psychiatric care, involves nothing more high-tech than a series of conversations with patients and their families where they live.

Call it a new twist on the old-fashioned house call.

HowardCenter, the state’s largest community mental health center, treats 15,000 clients each year, many of whom suffer from severe and intractable mental impairments. Steingard’s job is figuring out how to best treat them.

Her views on that complex challenge have changed dramatically over the 17 years she has worked at Howard. In the 1990s, she became increasingly concerned that drug manufacturers were overselling the benefits, and understating the risks, of the antipsychotic meds she routinely prescribed. Her concerns grew as she watched the growing influence of the pharmaceutical industry on her profession.

Steingard also saw firsthand that many of the antipsychotic drugs she was prescribing have serious side effects — treated by still more medications — including weight gain, seizures, diabetes, depression and sexual dysfunction. As a result, a certain percentage of HowardCenter clients simply refused to take them.

“I thought they were effective for a good chunk of people, and I knew they weren’t effective for other people,” Steingard says of the drugs she prescribed for hundreds of patients. “But I didn’t really know what else to do. I didn’t see any other path.”

Steingard’s breakthrough came in May 2011 when she read Anatomy of an Epidemic, a book by journalist Robert Whitaker that attempts to answer an alarming mystery in American public health: Why has the number of adults and children diagnosed with mental illness and put on government disability skyrocketed in the last 50 years?

Whitaker begins his book by looking at several studies of the long-term risks and benefits of keeping people on antipsychotic drugs. As Steingard explains, researchers have known for years that schizophrenia is associated with a loss of brain tissue, which was long believed to be a result of the disease. Whitaker uses the studies to suggest the brain atrophy may be due not to the illness itself but to extended exposure to antipsychotic meds.

Reading Whitaker’s findings, Steingard says she felt like she’d been “kicked in the belly.”

“If you’ve just spent your entire career giving people these drugs, and in many cases convincing people why this is what they really need to do, that’s a pretty horrible thing,” she says. “I wasn’t sure I would come to work the next day. That’s how profound it was.”

Whitaker ends his book by introducing the Open Dialogue method, a form of family- and community-based therapy that involves talking to patients and the people most affected by their mental health crises.

Steingard says she was initially skeptical about Whitaker’s findings and immediately emailed the author with questions about his research. She spent most of a summer going through all his primary reference materials, as well as “deconstructing and reconstructing everything I think about psychosis and optimal treatment.”

Since then, she and Whitaker have become friends, and she’s invited him to Vermont several times to give talks and attend grand rounds at Fletcher Allen Health Care.

Last summer, Steingard traveled to Finland for preliminary training in Open Dialogue. Patient outcomes in that country are almost exactly opposite of those in the United States: After five years, about 80 percent of patients are fully recovered from their first-episode psychoses and are back at work. In Finland, where antipsychotic drugs aren’t prescribed as much as in the U.S., only one in five patients require any maintenance meds — or those taken continuously — at all.

“They’re not really seeing schizophrenia in Finland. They’re seeing the same number of people coming in with acute psychosis,” Steingard says, “but people are getting better.”

As it turned out, Steingard’s reading of Whitaker’s book was well timed. After Irene knocked out the state hospital, the state asked agencies like HowardCenter for ideas on how to reduce the number of inpatient psychiatric beds. Steingard submitted a proposal to use Open Dialogue through the Stabilization and Recovery Team, aka START, which is the HowardCenter’s rapid crisis-response unit. The state agreed, and funded the pilot project with enough money to train three staffers in the therapy.

Psychologist Greg Tomasulo says Open Dialogue is a perfect fit for START, which was launched in August with the goal of keeping people in crisis out of emergency rooms and hospital psychiatric units. He’s clinical director of the program that sends mental health workers into the community — generally, to a patient’s home — whenever they get a call that someone is having a psychotic episode.

“Oftentimes people experiencing psychosis aren’t really interested in treatment,” Tomasulo explains. When someone becomes delusional and believes, for example, that he’s being pursued by aliens or government agents, he’s unlikely to agree to visit a physician’s office and accept pills from a stranger.

Open Dialogue brings a team of two clinicians to a patient’s home to talk with everyone directly involved in the crisis, to create a “shared experience of reality,” Tomasulo says. The method intentionally focuses on the whole family, he says, “so it doesn’t single out one person as the ill person.”

Through this process of “gradual engagement,” Tomasulo says, the patient begins to feel more safe and open to sharing whatever else is going on in his or her head.

“One way of thinking about schizophrenia is that it’s a brain disease,” he says. “Another is that it’s how somebody expresses their most difficult experiences in a way that they can’t yet put into words, so they use hallucinations and delusions to express themselves.”

By learning other ways of talking about difficult experiences, he adds, the patient no longer needs those symptoms anymore and they “resolve.”

Both Tomasulo and Steingard, who are halfway through 100 hours of training in the Open Dialogue method at the Institute for Dialogic Practice, in Northampton, Mass., emphasize that this method is not “antimedication,” as it’s sometimes characterized. Patients treated with Open Dialogue can also be on antipsychotic medication.

But as Tomasolu explains, “Under the old system, if somebody didn’t want to take medications, there was little we had to offer them. This is just another approach, another tool in the toolbox.”

Because Open Dialogue is so new to Vermont, its results are still preliminary and inconclusive. Nevertheless, since reading Whitaker’s book, Steingard has tracked the outcomes of 55 of her patients. In one year, she’s seen a 30 percent reduction in their consumption of antipsychotic drugs. Only two have had to be rehospitalized.

State mental health officials say they’re “very interested in the Open Dialogue model and how it could help improve the Vermont mental health system,” says Nick Nichols, director of policy at the Vermont Department of Mental Health. Nichols says that if the HowardCenter’s pilot project proves successful, the state will consider expanding it to other pilot sites.

Dr. Alice Hershey Silverman is a psychiatrist in Montpelier and until last year served as president of the Vermont Psychiatric Association. She knows Whitaker well and is “very familiar” with Open Dialogue therapy, calling it “a radical approach, given where American psychiatry is today. But I think it’s a very exciting approach.”

Silverman, who’s been practicing psychiatry since 1981, says Whitaker’s findings are consistent with what she’s seen over the years in her own practice.

“My clinical experience has been that these drugs don’t work so well, that people with these illnesses don’t get better,” Silverman says. “My schizophrenia and psychotic patients are unemployed, marginal. They’re not doing well in their lives.”

Like Steingard, Silverman says Whitaker’s book “changed my practice dramatically.” While she’s not using the Open Dialogue method per se, she’s completely rethought her entire approach to medication, not only antipsychotics but all psychotropic drugs. Today, she estimates that 60 to 70 percent of her patients on antipsychotic meds are now “tapering” off them. She’s carefully monitoring their progress and plans to eventually publish her results.

Other members of Vermont’s mental health community are equally intrigued by this therapy, as evidenced by the several hundred clinicians who converged on the Capitol Plaza Hotel in Montpelier on December 7 for a half-day presentation and discussion on Open Dialogue by Mary Olson, founder of the Institute for Dialogic Practice.

But even if the results in Vermont don’t prove quite as impressive as those in Finland, Steingard says the method has already “shifted the paradigm” on her approach to treating patients with psychoses.

“I love the inherent humanity of this approach,” she says. “Even if I continue to find that I need to use medications to help people through first-episode psychoses, I really like this method of talking to people.”