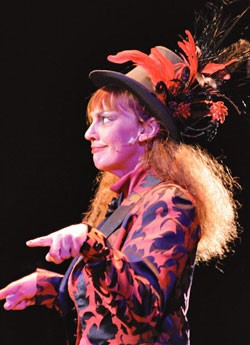 Vaudeville comedian Woody Keppel of Charlotte wears many hats. Sombreros, fedoras, pink aviation hats, wigs, coonskin caps and the occasional shoe or rubber chicken have all been spotted on his head at various times. His role as artistic director of the Festival of Fools is yet another “hat,” one that Keppel will wear as he corrals the jugglers, dancers, contortionists, tightrope walkers, fire breathers and acrobats on the streets of Burlington this Friday through Sunday.

The fest itself is a family reunion of sorts for Keppel, who has worked with many of these performers over the years. And festivalgoers may find among the exotica some familiar antics, if not familiar faces: Your zany uncle might be reflected in Michael Trautman’s impossible stunts and mayhem, or your daredevil kid brother in David Aiken’s “Stunts of Death.” Kate Wright, aka Yvonne, an “Aussie beautician on a mission,” could remind you of your batty great-aunt.

Presiding over the fest will be grand dame Doloreze Leonard from Québec, also known as Cirque du Soleil’s Madame Zazou. Don’t be surprised if she takes exception to your tie and politely stuffs it in your pocket, or sends you in dizzying circles as part of her pedestrian-directing duties on Church Street. If that happens, it’s probably best just to go with it.

All these characters and more will appear during the three-day festival, presented by Burlington City Arts. Keppel’s wife, Andrea Grayson, is the production manager. In its fifth year of celebrating circus arts, music and comedy by professional street performers from around the world, the Festival of Fools will take over four main stages in the Marketplace and City Hall Park. A Fools Night Out cabaret will be held Friday and Saturday in Contois Auditorium at Burlington City Hall, with “The Last Laugh (Best of the Fest)” wrapping things up on Sunday evening.

Keppel first hatched the idea of a street-theater festival in Burlington following a trip he took to the World Buskers Festival in New Zealand in 1994 as his alter ego, the bumbling Mr. Woodhead.

“Vermont itself is a great attraction, and Burlington is a very festival-friendly place,” he says. “Since it’s pedestrian only, like many of the plazas in Europe, the downtown is perfectly designed for a buskers festival.”

A good downtown by itself does not a good festival make, however. You’ve got to have performers who can put on family-friendly acts at a high skill level, who have plenty of experience and who can hold the attention of a large crowd for 45 minutes. Oh, and they have to be funny. Really funny. It’s Keppel’s job to sniff out such performers, who this year hail from locales as varied as England, Australia, California, Scotland and, of course, Vermont.

If you’re on the streets of Burlington this weekend, you may encounter performers wielding battle axes, riding a unicycle, juggling unusual items, walking on stilts, breathing fire or tying themselves in knots. Most of their acts are best described as vaudeville, which, Keppel notes, was “the preamble to American comedy of all sorts. It’s theater for the people and accessible to all ages.”

Not all the performers fit easily into a category, though. The MarchFourth Marching Band launches each of its shows with a rallying cry of “Joy now!” The 20-member group from Portland, Ore., offers up what Keppel calls “a great mix of high-octane, genre-defying music with freestyle dancers, stilt walkers and fire-breathing acrobats.” They do not, however, actually march; rather, the five-piece percussion and seven-piece brass sections inspire celebratory dancing.

The legendary Madame Zazou is similarly hard to classify.

“She’s a bigger-than-life character with a booming laugh and a voice to match,” Keppel notes. “She’ll be MCing the cabaret in Contois each night, but will also be strolling the streets during the day, during which time she’ll be interacting with the crowds.”

As the official ringleader and organizer of the festival, Keppel has his hands full — but Mr. Woodhead isn’t excused from duty. He’ll be onstage with Wells, the alter ego of Danish performer Henrik Bothe. Keppel describes their variety show “FOOLZ” as “music and circus art and check-your-brain-at-the-door comedy,” featuring juggling acts, spinning plates, a high-tech optical illusion called Neonman and physical comedy of all kinds.

Wells & Woodhead have performed on “The Tonight Show,” at festivals from Las Vegas to Hong Kong, at the Lincoln Center, the Barcelona Olympics and on public radio’s “A Prairie Home Companion.” Mr. Woodhead has also toured the world as a solo act and produced a children’s-music CD and several kids videos. When not dressed in the Bermuda shorts of his chaotic character, Keppel has appeared as a character actor in half a dozen films alongside stars including Billy Ray Cyrus, Steve Railsback, Sean Astin and the late Anna Nicole Smith.

“Woodhead is almost 30 years old, and I’ve done a lot with him over the years,” Keppel says. “I enjoy being that ‘ego’ more than being Woody Keppel sometimes — but I’m not sure I could stay there all the time. Sometimes, after longer runs, I’m so exhausted I need days to recover from it.”

Watching the Festival of Fools won’t be nearly as taxing as performing in it, but it wouldn’t hurt to polish your rubber-chicken-ducking skills, as street theater invariably involves the audience, too. And be on the watch for that wacky Madame Zazou.

Festival of Fools kicks off with a screening of Charlie Chaplin’s "The Circus" on Thursday, August 2, at 8:30 p.m. in Burlington City Hall Park. All other events take place Friday and Saturday, August 3-4, noon to 9 p.m.; and Sunday, August 5, noon to 7 p.m. on the Church Street Marketplace and in City Hall Park in Burlington. Most events are free. Fools Night Out cabaret, Friday and Saturday at 9 p.m. in Contois Auditorium at Burlington City Hall. $12 in advance/$15 at the door. Find a performance schedule and other info at burlingtoncityarts.org/festival_of_fools.