If you've ever been to Burlington, you've no doubt seen Lake Champlain. The lake, with the Adirondacks rising up on the New York side behind it, is hard to miss, especially driving down Main Street from I-89.

But have you ever seen Burlington from the water? Getting out on the lake offers a different, and refreshing, perspective on Vermont's largest city. There are mountains visible behind Burlington, too!

You don't need to own a boat to see them; you can rent one from the Lake Champlain Community Sailing Center. Founded in 1994, and now located next to the Andy A_Dog Williams Skatepark and the Moran Frame, the nonprofit Sailing Center is a valuable community resource serving more than 8,000 visitors a year. It's the only facility of its kind on Lake Champlain.

In addition to offering classes and camps for adults and kids, it also rents sailboats, canoes, kayaks and stand-up paddleboards. Rentals have been restricted to season passholders so far this summer, but they're opening up to the general public on July 12.

Offering water access to all, regardless of age, ability or income, has always been a key part of the organization's mission. "The Sailing Center makes it possible for anyone to get out on the water," says executive director Owen Milne.

After a challenging 2020, the Sailing Center is now poised to enhance its waterfront infrastructure with a new deep water basin, dock and universally accessible ramp — with help from a July 10 fundraiser (see sidebar).

On any given weekday, its summer staff of 40 is joined by rental customers, as well as 80 to 100 young campers. This year, everyone doing indoor activities is wearing masks, but outside, campers and staff are mask-free as they prep their vessels in the boatyard and pull them on two-wheeled trailers down a ramp to the water.

By 10 a.m. most days, the youngest group of kids can be found on a 21-foot keelboat with an instructor, while older campers prep their 19-foot 420 dinghies and their 15-foot blue Hartleys. The blue ones are the beginner boats, explains development and communications manager Bianca Roa. "They're indestructible," she says.

Campers wearing yellow life vests line up their boats along the side of the dock, sails hoisted, while instructors check to make sure everything's in order. Then one by one, the kids launch, one or two of them in each craft. An instructor in a motor boat pulls ahead and sets out buoys to help the kids practice steering.

Roa explains that campers aren't just learning sailing skills. She points out that it's very unusual, under age 16, to be in charge of your own vessel. There aren't many settings in which kids have that kind of autonomy. An instructor is always nearby if they make a mistake or get into trouble, but young sailors are also learning how to right their own boat. They practice capsizing and recovering — an experience that's applicable to many other areas of life.

The campers come in for lunch — provided free through the Burlington School Food Project — then go back out in the afternoon from 1 to 4:30 p.m. "We want them to spend as much time as possible on the water," says Roa. "I think a lot of these kids can use it this year." 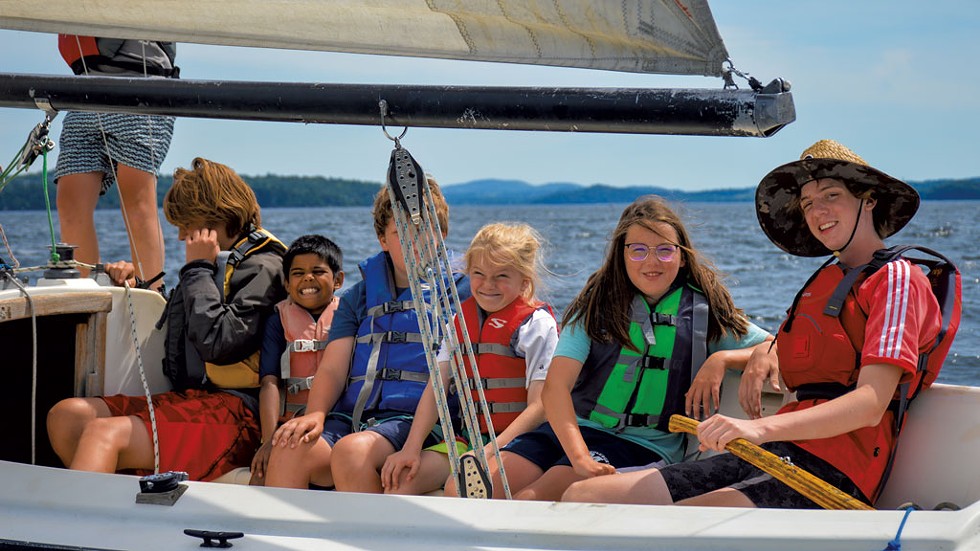 One of the ways the Sailing Center attracts newcomers to the sport is through camps and classes that combine sailing with other activities.

This summer, those offerings include Sail and Paint Camp, coordinated by the Davis Studio, in which kids in grades 3 to 5 learn to sail and to create watercolor plein air landscapes and Japanese wave paintings, and Pirates of the Champlain, which teaches kids ages 8 to 10 about sailing and stage combat. It's taught by Sailing Center office manager John Nagle, who also happens to be the co-artistic director of the Vermont Shakespeare Festival.

Beginner adults looking for an introduction to the sport might enjoy First Sail with Foam Brewers, which features a post-sail locally brewed beer at neighboring Foam Brewers.

The Sailing Center offers financial assistance to students who otherwise wouldn't be able to enroll, including a Sailing Diversity Access Scholarship, available to campers ages 11 to 15 who identify as Black, Indigenous or a person of color. The award covers full tuition for two to four weeks of camp — for four years. The multiyear commitment is intended to help recipients stick with the sport, from learning how to sail, to racing, to becoming a junior instructor.

Planning for the Future

For the first 24 years of its existence, the Sailing Center operated out of rented warehouse space at the Moran Plant. The location made sense because the facility included a dredged channel that accommodated large vessels. In 2018, the Sailing Center moved into a gorgeous new 22,000-square-foot building next door with classroom and event space, and a swanky rooftop terrace.

But it's still using the Moran channel to launch its keel boats. Milne doesn't think that arrangement can continue much longer.

Building their own deepwater basin is one of the waterfront infrastructure upgrades included in the Sailing Center's planned expansion, along with a new hoist and boat dock and a universally accessible ramp to benefit the Sailing Center's adaptive watersports program. The improvements would also enhance the experiential learning space used by area schools to offer lessons in math, science and lake ecology.

It will help more students like Leo Beebe and Alexis Blend get out on the water. Neither of the two Winooski 14-year-olds own a boat, but they attended camp at the Sailing Center in June. Both say they'd recommend the experience to others.

Fundraisers were difficult to plan in the summer of 2020. Lake Champlain Community Sailing Center executive director Owen Milne remembers a conversation with the nonprofit's board members about what might be possible.

Someone mentioned that other organizations had held drive-up concerts. What if the Sailing Center put on a float-up concert? They could set up a stage at the water's edge and invite audience members to pull up in their boats to listen. Instead of being locked in their cars, people would be out there on the water — apart, but still together.

That's how the Dana Bolton Flotilla Concert was born.

Named for instructor and Sailing Center champion Bolton, who died of brain cancer last spring, the afternoon concert, on a gorgeous day, provided the only live music some people got to hear last summer. It drew a couple hundred audience members on more than 70 boats, including people in kayaks and on stand-up paddleboards. "It was a beautiful sight," remembers Milne.

The show was free to see from the water, but the Sailing Center invited participants to text donations. They ended up raising $57,000.

It was a little less of a scramble to pull together this year's concert, which takes place this Saturday, July 10, from 2 to 9 p.m. The lineup includes Zach Nugent, Kat Wright, Grippo Funk Band and the Nth Power.

Attendees can listen for free from their own watercraft or stream the show for free on Facebook — or they can pay $500 to enjoy it from a table on the dock. That last option is new; in 2020 guests weren't allowed to listen on shore because of COVID-19 restrictions. Milne was able to hear it out there, though. "It was an amazing experience," he says.

Interested in any of these options? The Sailing Center asks that attendees register in advance for this year's concert at bit.ly/BoltonFlotilla21.