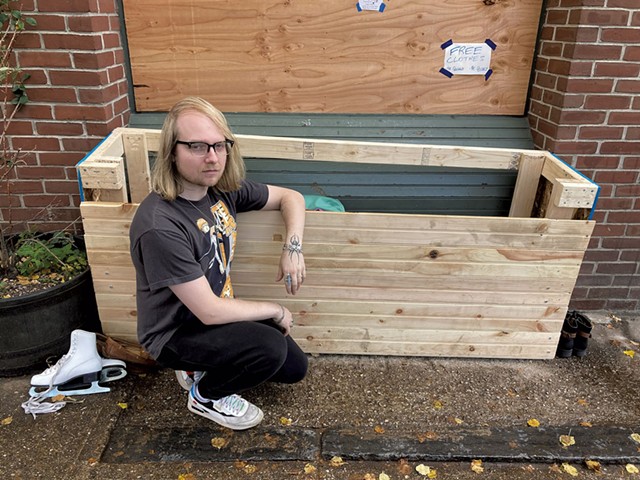 Every week at Burlington thrift shop Battery Street Jeans, owner Stu Sporko gives away more than 1,000 articles of clothing. The items are placed outside the College Street store in a big wooden bin, new on the sidewalk this week. The container replaces a set of plastic receptacles.

"Everything I own pretty much came from here," said Kim Rooney, 39, a self-described "floater" who is homeless in Burlington. She was looking through the bin on Monday afternoon — rummaging through an assortment of sweaters, pants and shirts — and waiting for Sporko to see whether he had any jeans her size inside the shop.

"If it wasn't for this place, I wouldn't have clothing," her friend, Kelly Ingram, 37, concurred. In addition to the basics, the two said they've gotten boots, backpacks and winter jackets from the free bin.

Once an employee of Battery Street Jeans, Sporko purchased the business in 2016; it was already giving clothes away.

"If somebody comes in and they need something, we give it to them," Sporko, 29, said. "The whole idea is to keep stuff out of the landfill and out of Goodwill's monopoly."

The free clothes help prevent theft, Sporko said, because they meet a person's basic needs. "I've had people tell me they used to boost stuff," he said. "But they're not trying to boost stuff as much anymore."

"It's important to be able to express yourself," Sporko said. "Even if a person's lost everything and they're on the street, they want to maintain their identity and their sense of style."

Sporko said he constantly fills the bin and is always on the lookout for practical, wearable, "not goofy" shoes. "Everybody needs a size 12," he said.

The freebies go beyond Burlington. Edith B. Wilkerson of South Burlington looks for items she can send to orphanages in her native Ghana.

"I wish we had millions of people like him," she said of Sporko. "The world would be peaceful."

The original print version of this article was headlined "Free Fits"