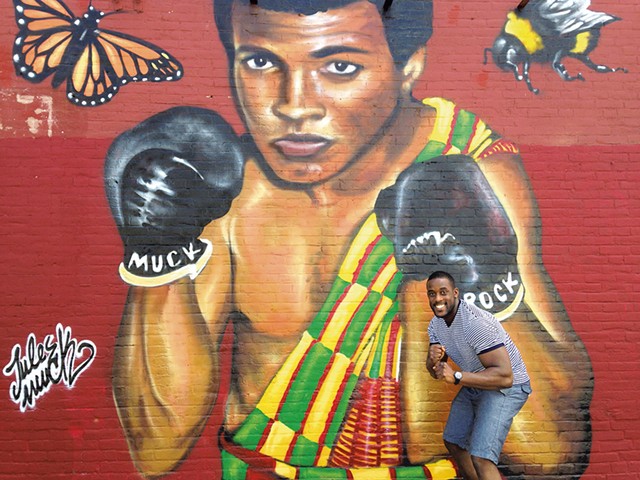 When Jules Muck visited Burlington last weekend, the street artist from Venice, Calif., was invited to paint a mural on the side of Mawuhi African Market in the Old North End. Her subject? Muhammad Ali. She chose to depict the boxing legend because he had died the previous day of Parkinson's disease at age 74. More than a champion athlete, Ali transcended his sport to become a global ambassador and one of the most recognized faces on the planet.

When she selected her subject, however, Muck had no idea that the market's Ghanaian owners had a personal connection to "the Greatest." Prince Nartey Awhaitey — Prince is his first name, not a title, he clarifies — grew up in Burlington and, after a 10-year absence, returned in January to help his family prepare African meals for sale.

When Awhaitey was 5 years old, his family put him on a plane by himself from Tennessee to New York. As he boarded the flight, Ali, a fellow passenger, told Awhaitey's parents that he'd keep an eye on the child.

"Muhammad Ali said he'd be willing to babysit me," says Awhaitey, now 28. "All I can remember is sitting on Muhammad Ali's lap and him showing me magic tricks. I still have the itinerary."

Muck, who is currently touring the East Coast, knew none of this until after she'd finished her mural — in a mere three and a half hours, Awhaitey notes.

Once an illegal graffiti artist, Muck was discovered at a young age by the legendary Lady Pink and has spray-painted likenesses from David Bowie to Pee-wee Herman to Bernie Sanders. Last summer, she was commissioned by Vermont artist Meryl Lebowitz to paint "Bernie Barn" — a likeness of Vermont's independent senator and Democratic presidential contender on the wall of a barn in Kirby.

"That made me fall in love with Vermont," Muck says. "I do these trips to get inspired and spread the vibe. It's like you have family everywhere you go."

Ironically, she came to the Old North End to help solve a graffiti problem. A few months ago, Awhaitey contacted Bruce Wilson of Service Rendered about repainting the brick wall outside his family's market, which has been tagged repeatedly. Wilson, whose nonprofit helps direct the energies of teens and young adults into productive and creative pursuits, reached out to local artists the Anthill Collective to offer the wall for a mural. They, in turn, contacted Muck.

Her painting features Ali flanked by a butterfly and a bee, a tribute to the heavyweight champ's most famous quote: "Float like a butterfly, sting like a bee. The hands can't hit what the eyes can't see." Ali is draped in an African kente cloth, which also has special significance to Awhaitey's family, being native to the Akan ethnic group of southern Ghana.

Awhaitey, who was born in Atlanta and has degrees in nutrition from Virginia State University, sees the mural as a positive omen for his latest pursuit: helping his family prepare traditional African meals that incorporate more nutritious ingredients. The market will begin selling those prepared meals in about two weeks.

"My uncle didn't know the whole story [about Muhammad Ali]," Awhaitey says. "So when I told it to him, he was like, 'Don't you see the significance of that? God has put this [mural] up there to let you know that you have to be the greatest, as well.'"