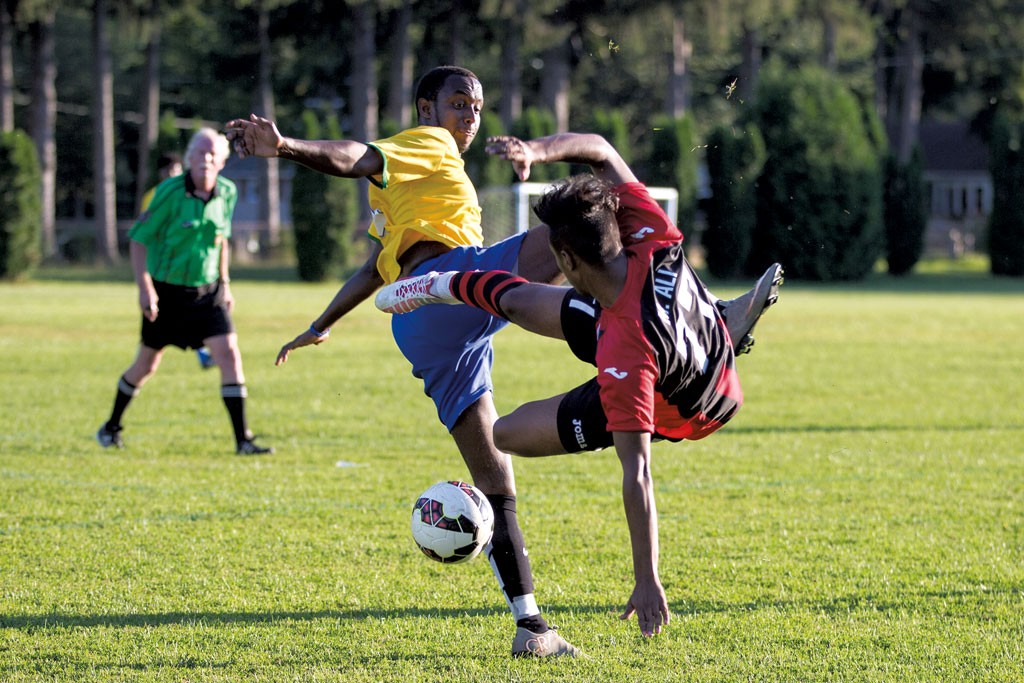 Thirty minutes before kickoff, Juba Star Football Club captain Noor Bulle led the team's warm-up session at Tree Farm Field in Essex Junction. A few latecomers straggled onto the field and joined the 10 players stretching their hamstrings in the sweltering heat of an August Sunday afternoon.

Bulle, a 25-year-old Burlington resident, was confident his team could beat the African Lions Football Club, but he'd set his sights on a greater prize. Juba Star — currently in third place in the Vermont Amateur Soccer League — could run away with the championship trophy if the club won its next two matches and the two top teams slipped up.

"If we don't win championship, that's OK. But we gotta finish undefeated," the captain said as he pumped up his team in a pregame pep talk.

Members of the two teams know one another well — their rivalry extends beyond the league, which includes 10 other teams from around the state. Most Juba Star and African Lions players are from Somalia. And 22 of the 25 Juba Star players are part of the Somali Bantu community, ethnic minorities originally brought to Somalia from southeastern Africa as part of the slave trade. The team is affiliated with the Somali Bantu Community Association of Vermont; its name references the Juba River in Somalia, where the Bantu people typically reside.

Bulle stressed that "soccer isn't about anyone's tribe." In fact, players often switch allegiances. Both clubs have players from other countries, such as Yemen, Iraq, the Democratic Republic of the Congo and even the U.S.

Still, the winner of this match would earn bragging rights, said Harun Yussuf, assistant coach of the African Lions. And that's something, given that soccer is more than just a pastime for these players. Bulle called it the Africans' "most important sport."

He explained that the game allows members of the local African communities to get together and build friendships. Soccer gives the players a chance to speak their native language. Finally, the sport "keeps the youth from the streets," the Juba Star captain said; the players on both teams range in age from 17 to thirtysomething.

For South Burlington resident Noor Abdullahi, soccer is "part of life." His desire to rack up more playing time prompted him to leave LeZot Football Club, the league's current leader, to join the African Lions.

On his old team, Abdullahi said, "I would get 10 to 15 minutes. I don't like being on the bench." He took the day off from his work at Autumn Harp in Essex Junction because he didn't want to miss the "big game."

Minutes before kickoff, each team filed onto its side of the field. Juba Star players wore red and black jerseys with black shorts and matching red-and-black socks. The African Lions players had loftier ambitions — they wore the colors of the Brazilian national team, though they accessorized with a rainbow assortment of socks, including pink ones. 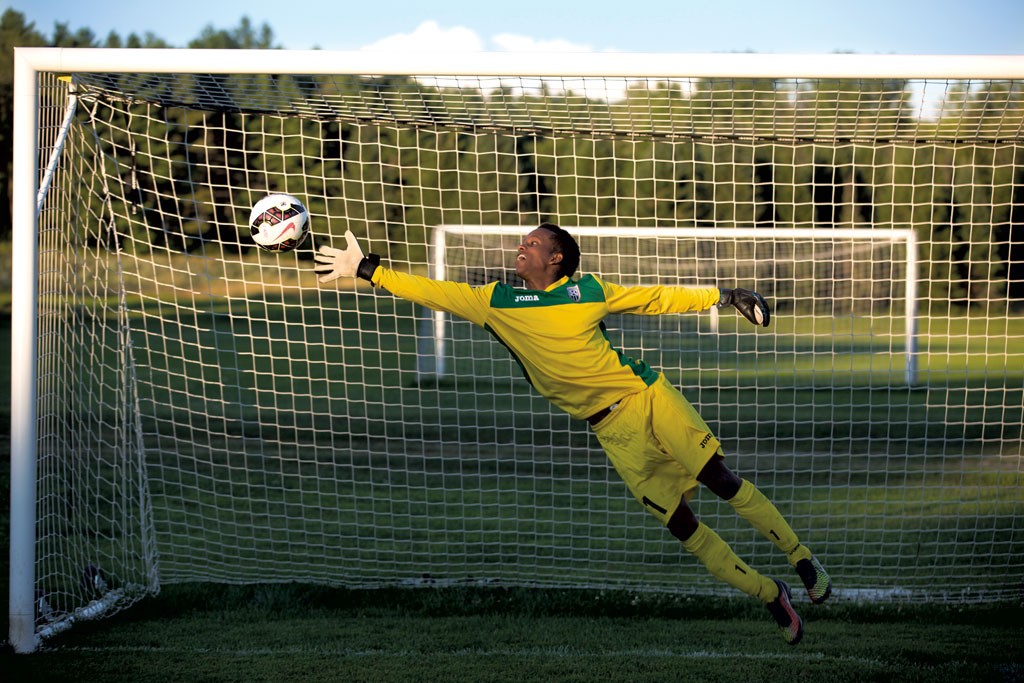 A crowd of about 50 gathered to watch the game, sitting on the benches, the grass and mats. Among the mostly male spectators was Marie Kay, who had come to watch her boyfriend, Elia Louis, play for FC Bosnia VT in an earlier match. Both of them had decided to stick around to see the African teams face off. Unlike the partisan fans who sat near their team's benches, Kay and Louis parked themselves on the farthest edge of the field.

Juba Star is the more experienced of the two clubs, having joined the amateur league in 2012. But the African Lions didn't seem any less passionate for being only in their second year. Once the game began, the team's assistant coach and coach, both of whom rose through the ranks of the club to their current positions, patrolled the length of their respective sidelines. They cupped their hands around their mouths and yelled at their players to increase the pressure on the opponents.

As is common in soccer matches, the substitute players and supporters from both teams were vocal. A blocked free kick attempt by a Juba Star player was greeted with cheers from the African Lions bench. But those players were soon shouting less enthusiastically when they found themselves trailing by a goal.

Odysseus Manzi, Juba Star's technical and tactical coach, stood out among the mainly African crowd. The self-described "European mutt" kept encouraging his players to "play the ball, not the man" — to go for the ball when making a tackle or challenge, as opposed to deliberately trying to take out the opposing player.

Manzi started coaching Juba Star in 2010 and introduced the team to the amateur league. Players had to attend the league's board meeting and prove that they were serious about joining. That meant having a roster and an organization behind the team — more than just a collection of passionate players.

"They want to make sure you can pay the league fees and all that, because it's fairly competitive," Manzi said.

Having coached the Juba Star for five years, Manzi can get a sense of what the players and the head coach are talking about when they converse in Maay Maay, their native tongue. But he noted that the players "are really respectful about making sure everybody understands what's being said."

Manzi was also impressed with the Muslim players' determination to observe the fasting month of Ramadan during the summer. It helped that the league was willing to grant the club's request for its matches to be held after 6:30 p.m.

By halftime, Juba Star was ahead 4-0 — not surprising, given that the action took place mainly in the African Lions' half of the field. The Somali Bantu team eventually cruised to a 6-1 victory. Juba Star striker Abdikarim Mohamed finished as the top scorer with a hat trick and one assist.

His team has one more game this week to round out the amateur league's summer season. Then Juba Star and the African Lions will face off again on Saturday, August 15, at Leddy Park in Burlington, in a post-Ramadan tournament.

While the African Lions club still hopes to play in the league's fall season, Juba Star team captain Bulle said his players will skip league play. They can't afford the $2,500 participation fee, which comes out to about $100 per player.

"We don't have that money," said Bulle. "Each of us has our own family to support. It's hard."

Instead, the team will train indoors and players will compete among themselves, most likely at the University of Vermont. Manzi, who will take over as head coach, said running a soccer team costs about $15,000 a year. That includes league participation fees, uniforms, transportation, and outdoor and indoor field rentals.

Over the coming months, Bulle will focus on improving the team's fitness, as well as instituting a more disciplined training program. The Juba Star Facebook page is filled with reminders for members not to be late for practice or training.

"These guys, they have lives outside. They work hard. Some of them have two jobs," Manzi noted. He added, "We're a community team. If we were a more competitive team, we would probably have to tighten the reins of time."

Bulle also wants to instill a team-oriented mentality, a quality that Manzi similarly holds dear. He points to the team's defense, which he claims is "rock solid." Manzi said he wants his players to apply the "camaraderie and learning on the field" to their lives outside football.

"I would like to see Juba Star in 20 years still be a football club," he said, "growing and moving forward in promoting football and their culture, and the level of diversity in Burlington that I think makes the city thrive."

Correction 8/13/15: An earlier version of this story listed the wrong name for the goalie pictured in the photo. His name is, in fact, Mukhtar Abdullahi.

Check the Juba Star Football Club Facebook page for updates on its game against the African Lions on Saturday, August 15, at Leddy Park in Burlington.

The original print version of this article was headlined "Football Fanatics"