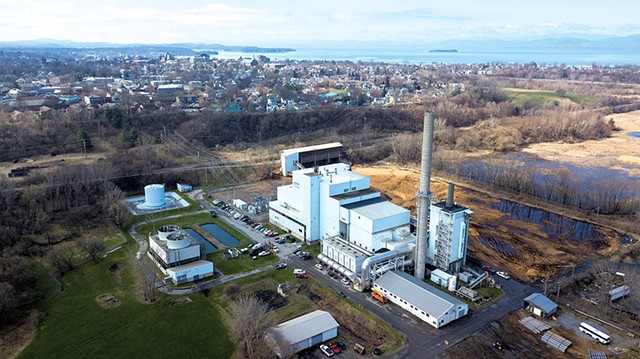 David MacDonnell has been working at Burlington's Joseph C. McNeil Generating Station since it first opened in 1984.

For 34 years, the biomass plant's dull roar has continued almost unabated, said MacDonnell, who now serves as director of generation. On a Tuesday in April, he watched as vats of wood chips poured unceasingly into blisteringly hot fires, to be converted into energy powering the homes of Burlingtonians.

But just a fraction of the fuel will end up as electricity.

The baby-blue plant in the north end of the city operates at just 24 percent efficiency; three-quarters of its possible energy output is lost at various steps in the process or in the steam that pours out of its nine-story smokestack in the Burlington Intervale.

From the moment McNeil started up, the city has conducted at least five studies exploring the feasibility of rerouting some of the wasted energy via underground pipes to heat buildings in downtown Burlington.

Each time, the analysis revealed an insurmountable obstacle: a shortage of cash, a scarcity of customers or a lack of technical expertise.

"We're closer than we've ever been." David MacDonnell tweet this

City officials have secured the necessary $40 million investment from a private Canadian company called Corix, which has agreed to build and operate the system. Several downtown businesses, including the hospital, are on board. So is Vermont Gas, despite the fact that it's a competing utility and would lose customers if the system were built.

On Monday, the Burlington City Council authorized the Burlington Electric Department to discuss regulation and permitting with the state's Public Utility Commission, which will help determine next steps for the biomass thermal project.

"We're closer than we've ever been," MacDonnell opined.

A wood-burning electric plant is by its very nature inefficient, explained Adam Sherman, program manager of the Vermont Energy Investment Corporation's Biomass Energy Resource Center. Steam powers the generator, but none of the heat produced in that process is put to use.

The district energy system would capture steam and heat trapped at McNeil and use it to warm water, which would funnel through 3.6 miles of super-insulated pipes up the hill to the University of Vermont and the UVM Medical Center. The water would also be pumped to Burlington's downtown businesses, including the redeveloped mall, Hotel Vermont, Main Street Landing, the federal courthouse and city buildings, said BED general manager Neale Lunderville, who is directing the project for the city.

Heat exchangers at each site would extract heat from the water to warm the building. The cool water would then circulate back down the hill to be reheated at McNeil. A natural gas boiler, which is not renewable, would power the system during peak heat usage and also serve as a backup energy source.

The 14-inch pipes would be buried alongside or underneath city streets, connecting 16 customers, 46 buildings and 4.2 million square feet of heat-seeking space.

Burlington would own the pipes, but Corix would sign an agreement to install, operate and reap the profits from the system for about 30 years. Then the city would have the choice of re-upping the contract or taking over the operation and assuming local control. No cash would change hands, according to Lunderville.

The benefits of the system are primarily environmental: The city would move closer to its 2030 goal of net-zero energy consumption. Once installed, about 15 percent of the power used for heating in the city — the equivalent of one in seven homes — would be renewable, Lunderville said. It would also save the equivalent of 1.7 million gallons of heating oil annually.

What McNeil generates now is technically renewable, but that doesn't mean it's clean. In 2012, the last year the facility reported its data to the U.S. Environmental Protection Agency, McNeil was one of the top carbon-emitting facilities in the state.

The plant burns up to 30 cords of wood chips — about 76 tons — every hour. Most of the wood chips are gathered from within a 60-mile radius of the plant. About 75 percent of the chips are loaded onto railcars in Swanton and shipped south to McNeil.

The district energy system would improve the efficiency of the plant from 23.8 percent to 26 percent. The best-case scenario is 30 percent, according to VEIC's Sherman, because most of the heat still can't be harnessed.

Lunderville nonetheless touted the project's "seismic" potential impact. At an April 16 presentation to the city council's board of finance, he called it "the No. 1 thing Burlington could do to address climate change."

Equally enthusiastic is Burlington resident Jan Schultz, whom Lunderville described as the "spiritual leader" of district heat. Schultz, a software engineer by profession, has been involved off and on since mayor Bernie Sanders appointed him to the city's electric commission in 1983. He can recall every roadblock that has kept the project from moving forward.

In 1984, the $67 million cost of building McNeil was too high for the city to consider additional investment, Schultz said. None of the four subsequent feasibility studies clearly explained how the city would pay for the system or where else officials could get the money.

The actual proposals were either too intricate or fantastical.

In 2003, John Todd, of UVM's Gund Institute for Environment, proposed a "living machine": Steam from McNeil would heat a greenhouse, to be used for growing mushrooms. Waste from the mushrooms would grow red worms — food for farm-raised fish.

Like other ideas, that one went nowhere, according to Schultz.

When Burlington Mayor Miro Weinberger took office in 2012, district heat was one of the "stuck and stalled projects" that he aimed to jump-start.

Weinberger appointed Lunderville to the BED post in 2014 and gave him an ultimatum: Find a way forward, or stop trying once and for all.

At the time, Weinberger thought district energy was a lost cause, he admitted in a recent interview with Seven Days. Nonetheless, he and Lunderville sent out a Hail Mary request for proposals to see if "anyone had some ideas of ways to make it work." The city received four applications and, of those, selected Vancouver-based Corix to run the project.

Another big step was getting Vermont Gas to sign on as a partner. Schultz said that the company would supply the natural gas for the backup boiler and might install the pipeline. Beth Parent, a Vermont Gas spokesperson, confirmed the company's involvement in the project but did not comment on specific elements of it.*

A district energy system "has been viewed historically as a threat to their investment" in natural gas infrastructure, according to Sherman: "If they're a partner ... you're taking away one of the biggest obstacles that had killed district energy in the other iterations."

Eric van Roon, senior vice president of corporate development for Corix, said the company hopes to break ground as soon as spring 2019 and would set up an office in Burlington in time for construction. The system could be up and running by the following year, he said.

Corix now operates about 10 district energy systems in Canada and the U.S., according to van Roon. In Vermont, Burlington would be the second such district heating system; Montpelier financed and built one in 2014 that draws energy from a nearby state-owned biomass plant along the Winooski River.

Running it has been simple, said Kurt Motyka, Montpelier's assistant director of public works. Many customers are saving money now, and "in the long-term agreement, we do expect savings" for all customers, Motyka said. Montpelier's system cost the city about $8 million and heats 20 buildings.

The Queen City project is substantially bigger and more complex, meaning more opportunities for delays — or another failure.

The next step is for Corix to conduct a detailed engineering study of the buildings involved, the construction and the cost. The city would need state and local permits, Lunderville said, along with a regulatory body, likely a local commission, which would set rates for Corix.

Most importantly, Corix and BED are working to get each of the 16 customers to formally sign on. Van Roon said he hoped to get that done by the end of June.

The UVM Medical Center has long supported the project's environmental goals — but "we're digging into the numbers and the feasibility," said Dawn LeBaron, vice president of hospital services.

Specifically, she's considering whether the promise of long-term energy security is worth the risk of higher short-term costs. "There aren't a lot of projects that would result in the elimination of the use of fossil fuels," she said.

Van Roon knows it's "optimistic" to expect action in 12 months. Others are more conservative in their estimates.

Schultz, too, expects a longer timeline for district heat. After three and a half decades of trying to make it happen, he's learned: "Most good things don't happen overnight."

*Correction, May 2, 2018: A previous version of this story incorrectly stated that Vermont Gas declined to comment.