Mohamed Jafar worked the crowd at Burlington's King Street Center, easily switching from English to Somali as he chatted up 40 New Americans — many of them neighbors and friends. The 22-year-old started organizing last Thursday's event back in September with Burlington City Councilor Joan Shannon (D-South District) to connect immigrants with local leaders.

Then he decided to run himself — against Shannon — on a platform of giving New Americans a greater voice in Burlington politics.

"This is an opportunity to get to know our city councilors and school board members so we're all involved in this," Jafar told the group in his welcoming remarks, with Shannon by his side.

Burlington is home to nearly 5,500 foreign-born immigrants — about 13 percent of the city's population — but their representation in local government is far from proportional. Of about 240 elected or appointed positions in the city, only two are held by New Americans, according to officials: City Councilor Ali Dieng (D/P-Ward 7); and Jafar, who serves on the Board for Registration of Voters. Jafar is also the only New American on any of the city's five Neighborhood Planning Assembly boards, which range in size from three to 12 members.

The dismal numbers are not for lack of trying, insisted Mayor Miro Weinberger. The city has successfully increased the proportion of residents of color serving on boards and commissions, he said. Weinberger highlighted the city's training and mentorship programs for youth of color, including internships at Burlington City Hall.

"We put resources and staff time and program design efforts into" addressing inequities and improving outreach, Weinberger said. "Are there lapses in that? Are there gaps? Absolutely," he acknowledged. "This is ongoing work."

In 2014, on Weinberger's watch, the City of Burlington published a diversity and equity report that set out goals to "eliminate race-based disparities" across city departments and in the community at large, as well as to "promote inclusion and engagement of all community members."

That same year, Bianka LeGrand, who was born in Bosnia and Herzegovina, became the first New American to win a seat on the Burlington City Council. She served one term before stepping down for "personal reasons" and now lives in Colchester.

Later in 2014, Bhutanese refugee Jeetan Khadka sought a seat on the Parks, Recreation & Waterfront Commission. He discovered he was not allowed to serve because his naturalization paperwork had not been finalized. After becoming a U.S. citizen, he prevailed.

The snafu prompted the city council to ask Burlington residents whether noncitizens should be allowed to vote and also if they should be able to serve on boards and commissions. Voters responded with a resounding no to both questions on Town Meeting Day 2015.

Khadka said he hopes the city will take up the issue again. "We have to think about letting residents be part of the process. That's how the new members of the community learn the democracy," he said. By barring them from participating in local boards and commissions, "You're just blocking them at the first gate."

In 2016, the city's Community Economic Development Office hired Laos-born Phet Keomanyvanh to be a liaison to the New American community. She organizes meetings to bring New Americans and city officials together and lets immigrant leaders know when a board or commission seat opens up. Keomanyvanh characterized her work as primarily "about connection."

Though refugees from Southeast Asia started arriving in Burlington in the 1980s, it took decades for the first immigrants to get involved in city government. Barriers to participation are more often cultural and social than procedural, according to New American leaders.

Those who have escaped an autocratic regime often retain a lingering fear of authority and have little inclination to serve, said Hemant Tamang-Ghising, a Bhutanese refugee and a leader in the community. People were "traumatized by our former government," he said. In the 1980s and '90s, roughly 100,000 ethnic Nepalese fled political repression and violence in Bhutan. They spent years in refugee camps before immigrating to the U.S.

Participation will increase in time, predicted Bidur Dahal, a local Bhutanese leader who serves on the board of the Vermont Hindu Temple. Few Bhutanese community elders speak fluent English, he said, while younger adults are too busy working, raising children, attending school or putting on cultural events to get involved in government. Dahal expects the younger generation will eventually step up.

Tamang-Ghising agreed. Those from Bhutan, who first came in 2008, may need more time to feel a sense of belonging and that they have the ability to serve, he said. Tamang-Ghising noted that members of Burlington's Somali community, who have been here almost a decade longer than the Bhutanese, have just begun to run for public office.

But none interviewed at the King Street Center last Thursday said their community was well represented in city government. Maryan Maalin, a mother of five from the East African nation, said she has repeatedly communicated her need for affordable housing and childcare since she arrived in Burlington 15 years ago.

"At the end of the day, it goes into the recycling," she told a Seven Days reporter at last week's event. "Why do they even ask us?"

The lack of representation can have tangible impacts. Cultural differences and communication problems have led to disagreements when it comes to making local policy.

In 2007, local Muslims raised objections to city officials when they found they could not use Lakeview Cemetery for burials. Islamic interments would have violated city ordinances, which mandate that each casket be encased in a concrete vault. Muslims put the corpse directly into the earth.

The Cemetery Commission, which had no Muslim members, eventually came to a compromise by working with local Islamic leaders, but the process took nearly a year.

More recently, the Burlington Parks, Recreation & Waterfront Department, along with the Winooski Valley Park District, found that Bhutanese and Nepalese immigrants were overharvesting fiddleheads. The young ostrich ferns also grow in central Asia and are culturally significant to the immigrants, African Association of Africans Living in Vermont outreach worker and program specialist Rita Neopaney told Seven Days when the issue arose in 2017.

The department put up signage and increased education, but it hasn't totally solved the problem.

Diverse leadership can help smooth over such differences.

In 2015, Khadka resolved a conflict after residents raised objections that a group of New American kids was regularly playing soccer in Battery Park, which does not have a designated soccer field. Khadka helped the soccer players access fields in Lakeside and Oakledge parks and taught them how to book the space in advance, Khadka said in an interview.

He learned that "every department needs to have some sort of access to the community level," he said. 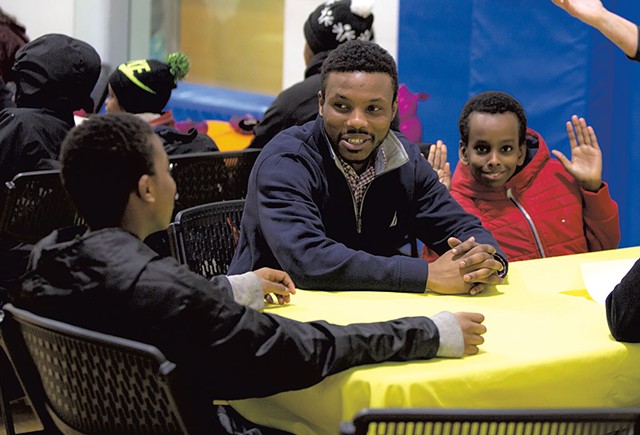 In November, Jafar discovered that the city offers limited translation services at the polls for citizens who don't speak English. He's trying to use his post on the Board for Registration of Voters to work with the city and the Vermont secretary of state to address the language gap.

Dieng said his role as an elected representative allows him to act as a trusted conduit for New Americans. The second-term councilor is working with residents of the Franklin Square Apartments who need help sorting out an electric lighting issue, he said. Last week, Dieng accompanied a constituent to the Burlington Department of Public Works to address a concern about street maintenance.

"New Americans who are homeowners and have questions or concerns, or have questions about parking, they feel comfortable calling me," Dieng said, noting that he receives calls even from those outside of his district.

Jafar sees himself filling a similar role. Although he doesn't identify himself as a "New American," his background has informed both his platform and his approach.

Born in a Kenyan refugee camp, Jafar was 7 when his family immigrated to the U.S. He attended Burlington public schools and, after graduating from Colby-Sawyer College last May, decided to return to the Queen City.

The oldest of 11 kids, Jafar grew up watching his parents struggle to pay the rent. His mother drove a cab to make ends meet. When the political novice knocked on doors in the South End last week, he brought along three siblings, according to Councilor Max Tracy (P-Ward 2), who accompanied them. Tracy encouraged Jafar to share his story because it would resonate with all residents.

"It's incredibly inspiring," Tracy said. "Not only that he has a New American background, but going away for college and then coming back and making Burlington a home for the long-term."

Jafar wants to improve access to childcare and increase city funding for affordable housing — issues that came up again and again in interviews with New Americans for this story.

They're not the only ones complaining about the cost of living in Burlington. On the campaign trail, Jafar downplays the notion that he would primarily serve on the council as a voice for certain racial or ethnic groups. "I want to make clear: My platform does represent other communities, as well," he said.

Jafar faces an experienced opponent in Shannon, who's served on the council for 16 years. Republican Paco DeFrancis is also running.

Regardless of how he fares, Jafar said, he'll continue his work in the community. He wants to hold other forums similar to last week's at the King Street Center, and he plans to continue a mentoring program he started for New American youth.

Members of that community view him as a symbol — a source of hope.

He and Dieng have proved that New Americans can run and even win, according to Khadka, who predicted the men would motivate others to get involved.