The Midtown Motel in Burlington was once a welcoming landmark for weary travelers, but today it just looks lifeless. The entrance to the long, rectangular building at 230 Main Street is closed off by a collapsing metal fence. Weeds have sprouted around the building's perimeter, growing tall enough to reach the first-floor windows. Vandals have tagged the peeling white walls with graffiti.

"It can be different," one spray-painted message says.

Real estate broker Jeff Nick, the building's co-owner, would agree. Nick approached the city's Development Review Board in mid-June with a plan to demolish the motel, which has been closed for 15 years, and use the lot for parking. At the moment, that's the site's only use: Nick and his business partner, Dan Morrissey, rent out the 14 spots beneath the dilapidated structure to downtown workers and plan to continue doing so.

The meeting didn't go well for Nick. The planning officials told him that because the building is considered historic, he needs a plan to redevelop the lot before he can bulldoze it — and the surface parking he proposes isn't allowed under zoning rules. A city parking lot adjacent to the motel is grandfathered in, they said.

Nick said the car park would be temporary and would be replaced when the city redevelops the "gateway block" on the north side of Main Street between South Union Street and South Winooski Avenue. The area includes the motel, Memorial Auditorium and a duplex sandwiched between the two, which Nick also owns. The city's master plan calls for the block to be redeveloped as a grand entrance to the Queen City's downtown, with mixed use, multistory structures.

Burlington's Community Economic Development Office had just found a possible tenant for the aging auditorium — an initial step in redeveloping the entire block — when the coronavirus pandemic hit. That all but torpedoed those plans in the near term, leading city officials to conclude that Nick's parking lot would not be short-lived.

In the meantime, Nick is paying more than $17,000 in taxes and $2,000 in vacant-building fees every year the tired motel remains standing. The way he sees it, the city's strict interpretation of the zoning bylaws is preventing him from accomplishing a worthy goal.

"I would go out on a limb and say this is about the only issue in Burlington everyone would agree with: Tear down the building," he said.

"The problem's never been about tearing it down. The problem remains: What are you going to do with it?" Gustin said. "I can't find anything in the city's zoning code ... that says tearing anything down for the sake of expanded surface parking is a good thing."

Nick's parking lot plan may be the sticking point today, but in the 1950s, the Midtown was built to accommodate the automobile. Motels, or motor hotels, were common on the outskirts of Burlington, but there were few lodgings in the center of town. Local architect Benjamin Stein designed the 15-room motel with parking underneath the narrow structure.

The Midtown became a downtown landmark, said Joe McNeil, a Burlington attorney who grew up in the motel's heyday. The place was convenient for traveling businesspeople but otherwise had "quite a reputation" as a spot for an afternoon quickie, McNeil said. Asked if he could recall any tales that would raise eyebrows, McNeil chuckled and said, "I don't have firsthand verification."

Kevin McLaughlin, on the other hand, does. McLaughlin's father was the county sheriff in the 1950s and '60s, and his family lived in and operated the county jail next to the motel. McLaughlin's bedroom window overlooked the Midtown, which he said was "party city" for locals who were too drunk to drive home. 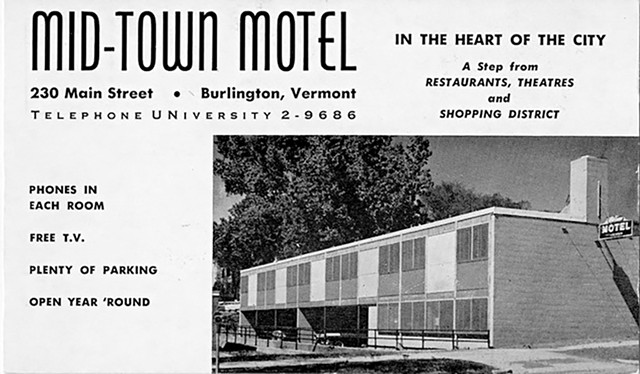 "It was, from our viewpoint, very entertaining," said McLaughlin, who is the present-day Chittenden County sheriff. "The cops were always responding to noise complaints."

The jail was demolished in 1972, leaving behind the municipal parking lot.

Nick and Morrissey, both experienced developers, bought the motel in 1995. As president of J.L. Davis Realty, Nick has brokered deals with corporate clients such as Starbucks and CVS. Morrissey is CEO of Wright & Morrissey, the state's oldest continuously operating general contractor.

After 10 years, the motel became a popular waypoint for homeless folks with state-issued hotel vouchers. The two men closed the business in 2005 after deciding that the slew of repairs needed to remain open weren't worth the investment.

Even in disrepair, the building presents a rare silhouette downtown. Stein used the International Style, a modernist treatment prizing straight lines and minimal ornamentation that rose to popularity in midcentury America. It's one of a handful of International structures in Burlington; others include the Given building at the University of Vermont Medical Center, the Burlington Electric Department headquarters on Pine Street and the NBT Bank branch on Bank Street.

Despite its architectural significance, there's no consensus on whether the motel is actually, legally, historic. The building is on neither the state nor national registers, but the city ordinance says structures must be considered historic if they're eligible for inclusion on those lists. The Midtown is also included in two surveys of modern architecture in Burlington, one of which recommends that the motel be added to the historic registers. As such, the building is "subject to the same regulatory standards as if it were listed," city planner Mary O'Neil said.

State architectural historian Devin Colman, however, says that only the Vermont Advisory Council on Historic Preservation, a governor-appointed body, can determine whether a property is eligible for listing, and his office hasn't evaluated the motel. Burlington's ordinance "refers to the state and national registers, which we oversee," he said. "It's a tricky setup that we navigate together."

Resolving this seemingly academic exercise has real-world implications for Nick. If the building is historic, the site's new use must provide a community benefit that outweighs the motel's significance, according to city zoning. Besides being prohibited in the downtown core, a surface parking lot simply doesn't fit the bill, city officials say.

"I don't see what's on this plan as necessarily preferable," Development Review Board chair Brad Rabinowitz told Nick at the June sketch plan hearing. "I'm not sure this is a good deal for the city, visually."

Nick thinks a landscaped parking lot would be an aesthetic improvement over the motel, particularly at the entrance to the downtown core. DRB member Springer Harris agreed, pointing to the city's own parking lot next door.

That lot is "in poor condition and is not appealing, and this building next to it doesn't help it," he said. "Making that area of the city [look better] is worth the effort to find a way to make this work."

Indeed, Nick is loath to build anything on his lot that might be incompatible with the city's vision for the gateway block, an area overdue for a makeover. PlanBTV, published in 2013, shows multistory buildings with housing, dining and retail in place of the city parking lot, motel and Memorial Auditorium, which was shuttered in 2016 after years of neglect.

"It's a golden opportunity to have a grand entrance to the downtown," Nick said. "We'd be foolish to build something there and then prevent some future project that would be more beneficial to the city."

The city focused earlier this year on redeveloping Memorial Auditorium and attracted one qualified bidder: music venue operator Higher Ground, which proposed to use it as a multipurpose event space. The city was prepared to put a $19.8 million bond to renovate the space on the November ballot, but the coronavirus pandemic put the Memorial project on indefinite hold, CEDO director Luke McGowan said.

While city officials aren't keen to leave a parking lot in the motel's place, Nick thinks developers might be attracted to the gateway block as an open canvas — which is what the city wants, he said.

Nick plans to submit a formal application to demolish the Midtown in September, after he visits the Wards 1 and 8 Neighborhood Planning Assembly next week.

"Leaving it there just casts a shadow on this whole block, and everybody throws up their hands and says, 'Look at this ugly building,' and nothing happens," he told the DRB last month. "You remove this building, I think you can create some excitement."

Perry Sporn, owner of Perrywinkle's jewelry store, agrees the block could use a face-lift. He's operated his business across the street from the motel for nearly 20 years and says the old Midtown is structurally unsound and attracts people who "hide under it at night." Allowing Nick to demolish the motel would be a first step in redeveloping the corner, which would improve his and others' business prospects, Sporn suggested.

"I don't think parking is a great long-term solution, but if it gets us a little closer, I'd rather have that than an empty building," he said. "There's nothing about that building other than a lot of ugly."

The original print version of this article was headlined "No Vacancy"