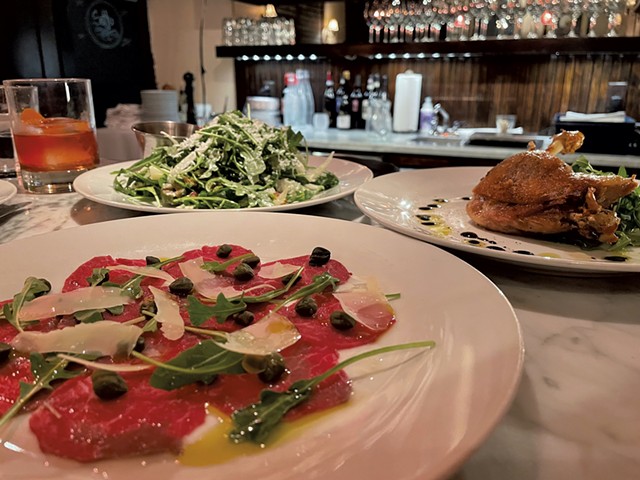 What is social media good for? Confirming the rumor that a favorite cozy wine bar has reawakened like Sleeping Beauty after almost two years.

On February 24, tiny, subterranean Sotto Enoteca at 150 St. Paul Street in Burlington announced via Facebook that it was reopening and shedding its pandemic persona, Sotto Provisions, a market selling Italian pantry items and prepared foods.

"Come see us, we've missed you!" the post urged. The feeling was mutual. Plus, Sotto's reappearance felt like a sure sign that things were returning to some kind of normal.

I've always loved Sotto's warm, intimate ambience. Murmurs of conversation and clinking glasses swirl companionably under the glittering antique chandelier. Add perfectly executed cocktails, a stellar wine list and fresh pasta from Trattoria Delia's kitchen, and I am all in.

The Facebook post promised limited reservations via the website of Trattoria Delia, Sotto's big-sibling restaurant next door. Not surprisingly, when I tried to book at the last minute for a recent Friday night bite before a Flynn Space show, none was available. My husband and I headed downtown with fingers crossed that we'd score walk-in spots.

A sign on Sotto's door directed customers to Trattoria Delia, where, happily, the host said we could have bar seats at Sotto. Both the reservations and entering through Trattoria are temporary measures, Jeremy Venditto told me later. The director of operations for both spots, he said that by April 1, Sotto will revert to its old ways: all walk-ins through its own door.

One change that will stick is the consistent availability of both an abbreviated, Sotto-specific menu and the full Trattoria menu. Also, Sotto's bar seats no longer offer a front-row view of cocktail shaking and stirring, which are now handled behind the Trattoria bar.

We missed the performance, but our Barr Hill Gin Negroni and Sugarhouse Sour made with maple whiskey, bourbon, lemon, turbinado sugar, egg white and bitters (each $12.50) arrived in good time, none the worse for their journey.

Our multicourse meal pulled items from both menus, starting with tissue-thin beef carpaccio ($14); fennel and arugula salad with crunchy pistachios, briny ricotta salata and olives ($12); and duck leg confit ($16). That last dish's richness was balanced beautifully by a sweet and sour eggplant caponata.

We also ordered bucatini amatriciana ($20), an old favorite with housemade bucatini (fat spaghetti with a hole through its core) and lavish amounts of cured guanciale. Without prompting, our server suggested bringing the dish split in half portions as our main.

To pair with the pasta, we ordered two different glasses of wine to share, including the Elvio Tintero barbaresco, on special for $14.50. I will admit to sipping more than my allotment of the luscious red — which, I scrawled in my notebook, was "as smooth as a velour tracksuit."

Everything was delightful. But the best news of the night was that the leisurewear I referred to metaphorically wasn't also on my body — as it has been for much of my wine drinking over the last 24 months.

The original print version of this article was headlined "Underground Delight"