Burlington to Update Its Ag and Livestock Rules 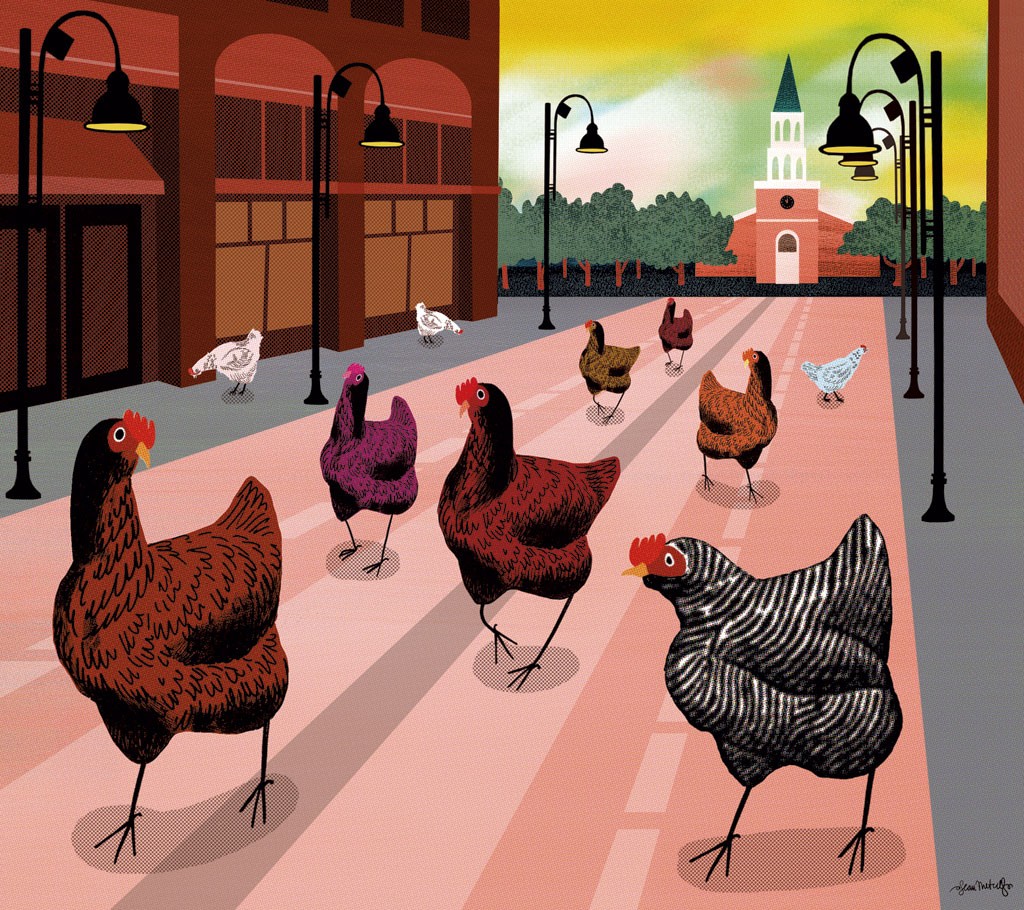 Queen City foodies sat up and took notice when Burlington's code enforcement team busted Will Bennington and his roommates for having too many chickens back in 2010. Was it really so egregious to keep a flock of 10 laying hens in their Old North End backyard?

It turned out that there weren't any rules on the books specifically pertaining to so-called "urban agriculture" within city limits. That left code enforcement to act on a literal interpretation of the one rule in Burlington statute governing limits on animals — an old kennel ordinance that requires residents to get a license to keep more than four animals.

"As it is now, there is nothing saying you couldn't have four cows in your backyard," said Alison Nihart, the coordinator of Burlington's Food Council. Conversely, though, the rules have kept some backyard chicken owners from expanding their flocks to provide enough eggs for their families.

Those rules could be coming, and soon. After a years-long effort to draft new ordinances, the Urban Agriculture Task Force is poised to hand off a series of proposed rules to the city council this week. If approved, they would allow Burlington residents to keep more livestock based on the size of their lots, and in some cases slaughter animals on their own property — if they meet criteria designed to protect animals' welfare, respect neighbors' rights and ensure public health.

"Right now, as it is, I've heard people have a lot of confusion," said Nihart. "'Am I even allowed to have chickens? Can I do this? Can I do that?'"

The goal: Eliminate that ambiguity and encourage quality practices.

Under the proposed guidelines, Burlington residents would be allowed to keep chickens, goats, sheep, camelids such as alpacas and llamas, donkeys, and horses — provided owners meet regulations specifying the space and bedding requirements of those animals. The task force sought to strike a delicate balance between sanctioning would-be backyard farmers and respecting the realities of high-density neighborhoods.

That's welcome news to Dan Goossen, a Burlington resident who keeps a small flock of laying hens — more than the city currently allows, he acknowledged, but not enough to bother neighbors. In fact, his neighbors have been so enamored of Goossen's chickens that one offered to host the flock while Goossen's home was under renovation. Another was inspired to start his own backyard flock.

"They escape occasionally," said Goossen, "and everyone's very good-natured about getting them back into our yard."

Goossen doesn't believe Burlington's current four-animal limit makes sense. Even during peak laying times, Goossen says, a quartet of chickens produces a total of two or three eggs a day — not enough for a family. Variables such as lot size, proximity to neighbors and coop size should be considered, he said, noting some people have room for bigger flocks.

For Goossen and his wife, who both grew up in Vermont, keeping chickens — as well as growing food in a large backyard garden — is a way to stay connected to the natural world, the larger agricultural ecosystem and their rural roots.

"To be able to have a taste of Vermont in an urban environment is really important to us," said Goossen.

The proposed rules dive into the nitty-gritty of livestock handling, tackling manure storage and disposal, the threat of potential predators lured to neighborhoods, and the need for vaccinations or other health requirements.

Bill Ward, Burlington's director of code enforcement, acknowledged that some will balk at any new rules or regulations. He said the ordinances aren't designed to be onerous, and that most of the regulations will seem like "common sense" to someone interested in farming responsibly.

"We want it to be something that people can do, but not something that people just pick up on a whim and think, 'I'm going to throw a bunch of animals in my backyard and run a farm,'" said Ward. The proposed rules are designed to keep the potential negatives of backyard livestock and slaughter — including the possibilities of unpleasant odors or noises — at bay.

In his four years on the job, Ward has noticed increased interest in urban agriculture. For example, more people are calling city hall with questions about keeping backyard chickens.

Anthony Iarrapino, a senior attorney with the Conservation Law Foundation, thinks that's a direct response to national trends in agriculture.

Iarrapino, who helped the task force draft the language for the proposed ordinances, said people want to know where their food is coming from and how it's produced.

"There's just a real growing appetite for people to have some connection with the food they're eating, and to increase the availability of food that does not depend on fossil fuels to make it from Point A to Point B," said Iarrapino.

The task force's recommendations go beyond livestock and slaughter: The city council's ordinance committee already has in hand a set of proposed updates that advocates hope will encourage more food production within city limits. Zoning tweaks would allow farmers markets in almost every part of the city, which could encourage neighborhood-scale markets. The size of structures exempt from zoning permits would increase so that most modest chicken coops, small greenhouses, hoophouses and rooftop gardens could be built without prior approval. The proposal also includes incentives for builders who incorporate gardening space in their developments.

The city council has held off on digging into those proposals so far — waiting instead for the board of health to finalize the livestock and slaughter recommendations. Board member David Casey estimated that those last pieces would fall into place by the end of this week.

The rules around urban agriculture — or lack thereof — vary in Vermont's other urban centers. Winooski requires permits for all animals other than domestic dogs and cats. Its city council grants final approval for keeping chickens, and applicants must attend a council meeting to seek that approval. Would-be chicken owners need to provide information on the number and origin of the chickens, along with health certificates and a plan to keep chickens contained and predators at bay.

Meanwhile, the animal ordinances in Vermont's capital city are fairly antiquated — "Don't bury your horse," is how Montpelier planning and zoning assistant Audra Brown jokingly summed up the 1972 ordinance. Today, Brown said, residents need to be aware that certain structures, fences or sheds may require a permit, depending on their size — but other than that, she said, "There aren't rules. You can garden your heart out."

Brown said that small, portable chicken coops are increasingly popular in Montpelier. A pig lived at a home just off of Main Street last year. Drive down Elm Street, she said, and a passerby will notice large gardens, raised beds, chickens, and even miniature goats and sheep. (The sheep are hers.)

Said Brown: "If it's not bothering people, who cares?"

The original print version of this article was headlined "Coming Home to Roost: Burlington Updates its Ag and Livestock Rules"