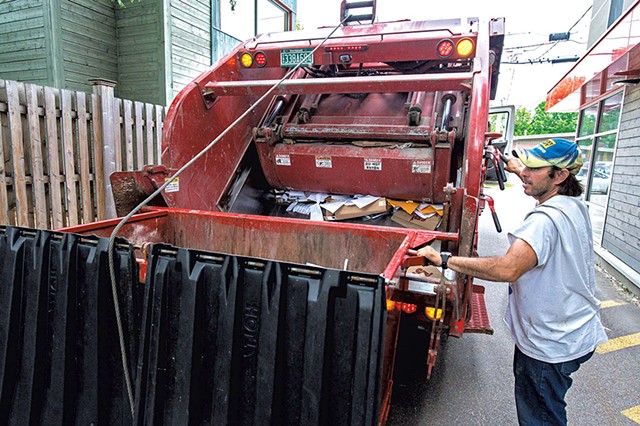 The groaning garbage truck navigated a tight turn onto Luck Street in Burlington, switched on its warning beepers and reversed into a driveway, where two bright red Myers dumpsters waited to be emptied.

Cars carefully nosed around the protruding front of the truck on the narrow residential street. The engine roared, and the truck's hydraulic lifts raised the dumpsters with thuds and clanks. When the transfer was complete, the rig rolled out of the Old North End neighborhood, where wheeled bins and dumpsters from competing haulers Gauthier and Casella awaited a different set of big, noisy, smelly trucks.

In a region rife with redundant refuse removal, Burlington and South Burlington are asking if there's another way. The two cities are jointly studying a system of consolidated trash, recycling and compost pickup in which each city chooses one hauler to serve a given neighborhood.

The goal is to see whether there's a way to reduce grinding truck traffic and get consumers a better deal on waste disposal, according to Tom Chittenden, a South Burlington city councilor who supports the study.

The status quo just "means we're paying more, burning our roads down and using more fossil fuels," he said. "I'm fully supportive of looking at different ways to do trash collection in South Burlington and across the state."

The $100,000 study will also explore whether recycling would increase under such a system, and whether it's feasible to include curbside food scrap pickup, as well. And for Burlington — where the city pays its own employees to collect recycling but relies on private haulers to collect trash — the study will examine whether it would be more or less expensive to turn curbside recycling over to private haulers.

Under a consolidated system, each municipality would create geographic districts and put them out to competitive bids, effectively divvying up swaths of streets to the hauler with the lowest bid. Trash would be picked up on a certain day of the week, dictated by the contract.

Although Burlington and South Burlington have joined in the study, with assistance from the regional Chittenden Solid Waste District, the two municipalities don't plan to merge trash, recycling and compost collection — yet. Nor does either city envision prohibiting penny-pinchers from hauling their own household trash to one of the drop-off centers operated by the waste district, a now-allowed practice that can cost as little as $10 a month compared to the roughly $45 it costs to hire a trash hauler. The study assumes that 15 percent of households will choose the do-it-yourself approach.

"There are a lot of people over a long period of time who have expressed dissatisfaction with the way Burlington currently handles trash removal," Weinberger said. "So that's why it's being studied."

But most haulers oppose the change, just as they did — successfully — in 2014 when the waste district last studied, then dropped, the idea.

Winooski-based Myers Container Service sees the proposal as government interference in private industry. It's unfair to single out waste collection for regulation when the internet shopping craze puts home-delivery trucks on streets seven days a week to drop off everything from dish soap to boxed dinners, according to Joe Sinagra, sustainability director at Myers. "Maybe Amazon shouldn't be allowed to deliver on Tuesdays in South Burlington," he suggested sarcastically. "And what about oil delivery? Are they going to say all oil has to be delivered on a certain day of the week? There's dozens of examples that we could cite."

"The people need the choice; they don't need the government to tell them what to do," added Scott Barnier, owner of Barnier Waste, Dumpster & Trash Removal in Essex Junction.

He strongly opposes consolidation, as he did back in 2014. Small companies such as his offer personal service, such as back-door pickup for elderly customers who can't push a wheeled garbage tote to the curb. Bigger companies might not, he said.

Bottom line? It will be impossible for small companies to compete with big ones on bids. "It will put us out of business," Barnier predicted.

Casella Waste Systems, the largest trash company in the state and the owner of the only full-service commercial landfill in Vermont, did not respond to messages last week. A spokesperson at Gauthier Trucking, another key player in Chittenden County, declined to comment.

Residents in the Old North End neighborhood offered mixed opinions about the concept of a single hauler picking up trash. "I like it," Breeze St. Amour said, as she walked to her apartment on Bright Street last Friday. The young woman, who works as a caretaker for her father, isn't bothered particularly by trash truck noise. But she does worry about their exhaust polluting the air.

Jamie Joppie, an apprentice optician who lives on Intervale Avenue, also thinks consolidated collection is a good idea. It's true that there are many types of delivery vehicles plying the streets, but reducing the number of trash trucks is a step in the right direction, Joppie said as she walked her beagle on Bright Street. "Every little bit helps."

Marilyn Gleason, a longtime resident of Luck Street, doesn't see the need. The retiree contracts with Gauthier for trash pickup and wouldn't want the city to tell her which company to use. "Why would they do that?" she asked from a seat on her front porch. "Especially when people are paying for it themselves."

The waste district has licensed nine haulers to pick up trash in Chittenden County. Some municipalities, including Burlington, require additional licensing. Four or five haulers are currently licensed to service the city, according to CSWD.

The study will analyze costs under the current patchwork, compared to a consolidated system. It will also review the efficiency of the 15 routes used by the Burlington recycling program and compare the cost of municipal recycling pickup with private collection. Potential trash collection routes in both cities will be identified. Cost comparisons will assume a seven-year contract.

In almost all of Vermont, residents either pay to have their trash picked up or take it themselves to drop-off centers, the modern-day version of the traditional town dump. Most refuse is then trucked to the Casella landfill in Coventry.

But the Vermont way is unusual. Roughly 70 percent of American municipalities collect refuse or contract a single company to do it, according to Nancy Plunkett, director of special projects at CSWD. "So we're actually in the minority."

There are some exceptions to the indie rule in Vermont, including in Chittenden County. The Town of Westford contracts with private hauler Myers for town-wide residential trash and recycling pickup; the same truck collects both. Property taxes cover the service, which allows for 64 gallons of trash per week per household. Anything beyond that is billed to the homeowner.

Fairfax also contracts a private hauler for pickup, as does Brattleboro. Few, if any, Vermont communities employ their own town or city workers to collect trash.

It's unclear whether Burlington will consider privatizing its municipal recycling service. Property taxes help support it, but much of the funding comes from a surcharge that private trash haulers are required to collect from Burlington customers and pass on to the city.

Haulers including Barnier and Myers say that practice artificially jacks up prices and makes them into de facto tax collectors. They also wonder whether consolidated garbage pickup will produce more landfill trash. Right now, residents have a financial incentive to aggressively recycle and compost: If they generate less landfill trash, they can save money by having it collected twice a month rather than weekly, Sinagra said.

Customers who are paying a set rate might recycle less, he suggested.

Even though Myers has a consolidated trash contract in Westford, the company isn't lobbying for it elsewhere. Westford is a small town, and the company's fleet can handle the work in one or two days. But it would be difficult for Myers' fleet to serve all the homes in one district of Burlington or South Burlington on a single day, and it would likely require multiple trucks, Sinagra said.

He noted that customer service could also suffer in a monopoly-like system. In that case, Sinagra asked, "Who's going to be the garbage police?''

Some worry that big hauler Casella would win the bids to serve the two cities and would gain even more clout in the state.

"This is strictly a feasibility study," cautioned Plunkett. "The decision to implement a program has not been decided. It's something the city councils will decide down the road."

One way or another, though, the problem of four different haulers negotiating the same street needs to be addressed, said Justin Rabidoux, South Burlington director of public works: "We're asking the type of questions that, frankly, municipalities should be asking."

The original print version of this article was headlined "Too Many Trash Trucks? | Burlington, South Burlington study new approach to waste pickup designed to reduce garbage rigs on roads"