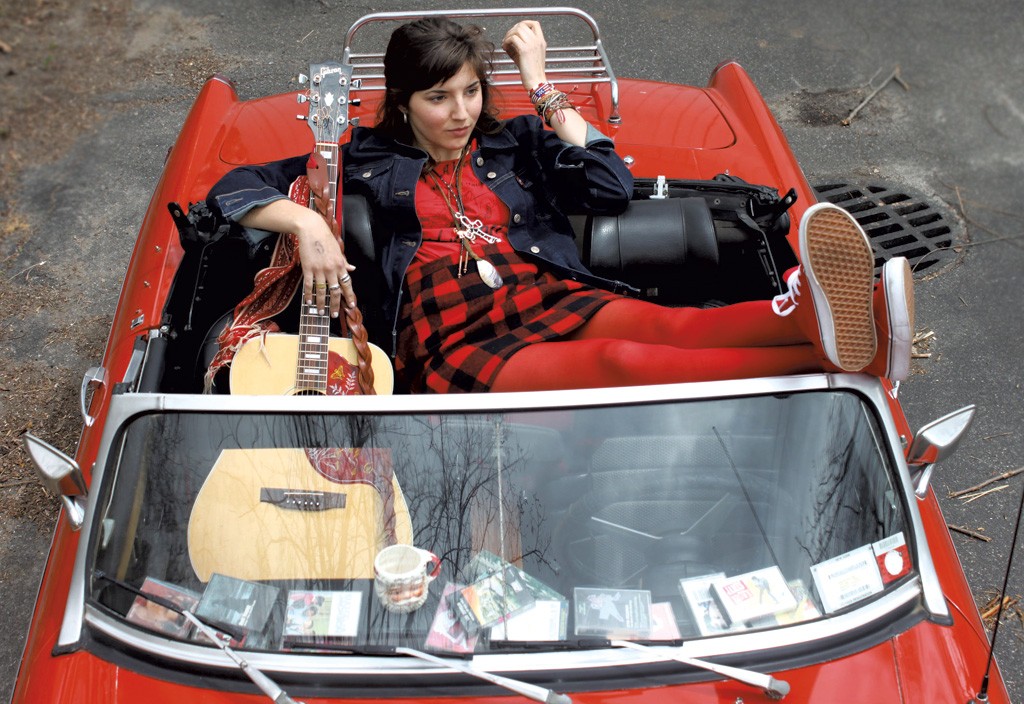 Caroline Rose has to run out to feed the meter, lest she risk another parking ticket and a likely tow. Or, perhaps more accurately, an eviction. The small Ford sprinter van parked across the street from Muddy Waters coffee shop in Burlington is not just the vehicle the songwriter uses to travel to gigs — it's also her home.

"I've been living in my van for about six months now," Rose says, returning to the café table still looking slightly harried. "Is Burlington the only fucking place in the country that still uses coin meters?"

She might know the answer to that question better than most. Though based in Burlington, Rose, 25, tends to spend more time on the road than at home. Lately those travels have included touring cities all over the country in support of her 2013 record, America Religious. That album, a gritty, alt-country-flecked gem recorded with longtime musical partner Jer Coons, drew wide acclaim from local media and national outlets such as Paste magazine and American Songwriter.

That well-deserved attention led to Rose's latest record, I Will Not Be Afraid, finding a home with Little Hi! Records and Thirty Tigers, which jointly released the album in August. The latter is a Nashville imprint and agency most recently responsible for distributing releases by Lucinda Williams, Sturgill Simpson and Trampled by Turtles, among others. Rose will play the Grand Point North music festival at Burlington's Waterfront Park this Saturday, September 13. (Incidentally, TBT play the fest the following day. See that interview on page 70.)

Seated by a large, sunny window overlooking Main Street, Rose is almost reluctant to talk about her new recording. In part, that's because she's already focused on her next one, an EP due in early 2015.

She grows visibly excited when she explains that the EP will have a more jagged edge than even the rough-and-tumble rockabilly found on I Will Not Be Afraid.

"The stuff I'm writing now is moving toward a harder sound," Rose says, and adds that she's recently been into psychobilly and bands such as the Cramps and Denmark's the Nekromantix. She points to one song in particular that will appear on the new EP, a cut called "Cult Leader Psychopath."

"I like messing around with different writing styles," Rose says. "This one is, like, a zombie Buddy Holly on the prowl for fresh blood."

If that description sounds like a far cry from the rootsy, rambling and often introspective material found on America Religious, well, it is. Rose and multi-instrumentalist Coons have recently taken up with a band that also includes local bassist Pat Melvin and Burlington-based pedal steel player Brett Lanier. Having those players on tap has allowed Rose to write with a fuller, and electric, sound in mind.

"It's changed everything," she says. "I can do so much more." After a pause, she adds, "I just wanna burn my acoustic guitar."

Pressed to talk about her current album, Rose explains that the record is a mix of new and old material, some of which goes back to her teen years.

"I came to a point where I could put out all new material and get caught up to where I am now with my writing," she says. "Or I can put out older stuff and give those songs life, a proper existence, and people can do with them what they will. Then I can move on to the newer stuff."

Rose's musical wayfaring reflects her own yearning to travel. And vice versa.

"Burlington is definitely my home base. But I like to wander around," she says, gazing out the window toward her van. "I sort of live like a monk. Though a monk probably doesn't drink..."

Rose says she's been possessed by wanderlust since she was an adolescent aching to flee her blue-collar Long Island hometown, which she describes as "really nothing special at all."

Her teenage years were isolated, Rose says. She was a misfit in high school with few friends and fewer reasons to stick around. After graduating, she studied architecture on a full scholarship at a small liberal arts college in New England. And then she hit the road.

"I've always been a huge loner my whole life," she says. And you can see her social discomfort when she chews on the corner of her lower lip while contemplating what to say next, or stares at her fidgety hands when she does speak. But the shyness is fading.

"Now I've blossomed into a socialite!" Rose says, with a self-deprecating chuckle.

Her sarcasm aside, I Will Not Be Afraid suggests a newfound confidence, both in that declaratory title and in the music it contains. From the snaky, percussive opening notes of "Blood on Your Bootheels," to the brazen freakout that is "At Midnight," to the rebooted and leaner version of "America Religious," the album reveals Rose as an artist who is increasingly more comfortable in her own skin. That's evident in her fiery live show, too, which wasn't always the case.

"Before, I just didn't want to perk up onstage," says Rose. "I just wanted the words to be taken seriously. So I tried to make everything else as plain as possible, so that it would make the words stand out more." She was so obsessed with plainness, she says, that she wore the same outfit at shows for a solid year.

"The more I did that, I realized that's so dumb," Rose continues. "Because it's not honest. I thought I was being honest by highlighting the songs alone. I wanted the songs to stand out. But I wasn't being me onstage."

Rose says playing live as a solo artist was often a burden; she would feel a weight lifted as soon as she exited the stage and could be herself again.

"Now I realize you can still make great art and be yourself," she says. "Gaining confidence to be who I am, not only in life but onstage, is the biggest thing. It's really liberating."

Rose credits Coons with helping draw her out of her shell musically. The two met in 2008 at a college gig where she was opening for Coons, then a solo artist with a burgeoning career.

"I remember pacing backstage after listening to her," Coons said in a recent phone conversation. "I had my head in my hands, like, How the hell am I supposed to follow that?"

The admiration was mutual. A few days after the show, he received an email from Rose. "She said, 'I really thought you were gonna suck, but you totally didn't!'" recalled Coons. "I just wrote back, 'Ditto.'"

In 2009, Coons emailed Rose saying he had a small studio in Burlington and would record her for free. Coincidentally, she had just signed up for a class at the University of Vermont, and landed in the Queen City only days later. The two began working on a demo EP. It included a couple of songs, "Back East" and "Shepherd," that would later resurface on I Will Not Be Afraid.

Coons had long been urging Rose to get her music out into the world. But it wasn't until the America Religious sessions that she began to feel confident enough to do it.

"She had always just written for herself, which is a really beautiful, pure thing," Coons said. "But when we started playing that stuff, I just thought it was insane. I was like, This is the one."

Critics and taste makers around the country agreed. Soon Rose found herself with a label and a team of promoters, booking agents and managers working to get her music out. Various songs from I Will Not Be Afraid are now in rotation on radio stations nationwide. Later this month, Rose will embark on a U.S. tour, including a run of dates opening for songwriter Noah Gundersen.

"She gambled on maybe losing the thing that was her outlet and making a career out of it," Coons observed. "She was always so guarded about her art and didn't want to compromise it in any way. My goal has always just been not to screw up what's so special about her."

The band members agree. "She's a sassy one," noted Melvin recently in an interview at Lanier's Burlington home. "She gets points for seemingly not caring what people think but also being aware. She has a healthy balance."

"She has incredibly high standards," Lanier added. "But she doesn't worry about the thing she just did. She's always thinking about what she wants to do next."

At Muddy Waters, Rose confirms that. "There's no way to know who's gonna like what you do and who's not," she says. "And who gives a shit? Just make stuff and put it out there."

Still, Rose says she feels the pressure that comes from increased attention and expectations.

"I've had to adapt to it," she says. "I used to prefer to have my little dark corner. And sometimes I still do. But now it's different. There's more people watching, so I'm more paranoid. But I have to remember that it's a good thing, too. If I do this well enough, it will allow me to make another record. And that's what I want to do. I want to make a billion records."

Rose adds, "And I'll live in my van for as long as that takes."

The original print version of this article was headlined "Rambling Rose"