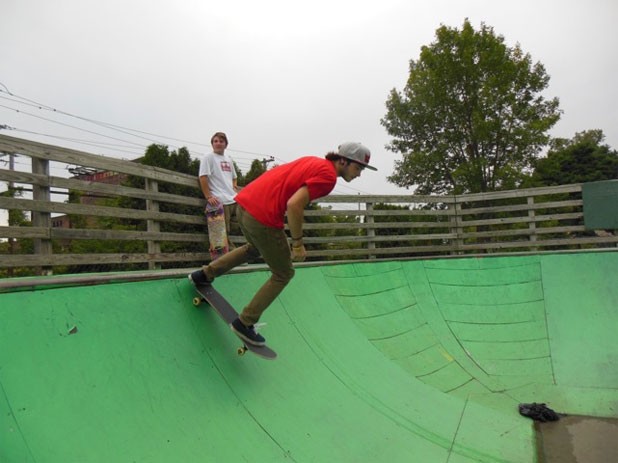 The construction schedule for Burlington’s million-dollar waterfront skate park has again been pushed back.

The postponement, which has not been formally announced by the city, is drawing a cynical response from disappointed skateboarders. And while Miro Weinberger says he still intends to make good on his pledge to “get things moving again” in Burlington, the lag in developing the skate park will reinforce suspicions that major public projects seldom get completed on time in the Queen City.

The decision to wait until next spring to start work on the envisioned world-class skating facility results from bids for the project coming in “a couple of hundred thousand dollars” above the budgeted sum, says Peter Owens, director of the Community and Economic Development Office.

Weinberger adds that the city determined it would be “more prudent” to wait several months rather than start work in September, as had been planned. Bids are likely to be lower in the spring, the mayor speculates, because, he says, it was mainly the cost of pouring and molding concrete in winter that accounted for the unexpectedly high price tags proposed by two construction firms. The city hopes to receive at least a third bid in the spring for this “pretty sophisticated” work, Weinberger says.

Two of the dozen or so skaters using the existing park southeast of the abandoned Moran Plant last Saturday didn’t seem surprised by news of the postponement.

“It’s too bad, but I’m used to the city making promises and not fulfilling them,” commented Justin Keskin. He had been a member of a coalition formed in 2010 to push for construction of a new park.

Another skater, Tommy Vrielynck, predicted, “If they don’t build it, Burlington is going to get lamer.” He added, “If it doesn’t happen right away, it’s not going to happen.”

Several skaters pointed out, however, that the city has made significant improvements in the 12-year-old wood-and-metal park. “It’s a lot safer now,” said Keskin, who noted there are no longer jagged pieces of metal protruding from surfaces. The existing skate park will stay open while the new facility is being built next summer.

Ward 3 Progressive City Councilor Vince Brennan said in an interview on Monday that he’s “definitely disappointed” by the delay. “I feel for them,” Brennan added in regard to the skaters who had voiced dismay. “Here it is, being pushed back again, which is majorly unfortunate,” said the councilor, whose ward includes the site of the proposed park just north of Moran. Brennan added that he’s displeased that the mayor has not shared news of the postponement with city councilors.

Construction was initially planned to start in the summer of 2011, with completion planned for the spring of 2012. But those dates came and went with no action due to a lawsuit filed by a nearby resident, who challenged the city’s Waterfront Access North project that involves infrastructure improvements near the Moran Plant and rebuilding of a stretch of the bike path between College Street and North Beach. Construction of the skate park is part of that plan.

Legal hang-ups were finally resolved out of court a year ago. And in November, Burlington voters overwhelmingly approved a $6 million bond that helps fund the waterfront projects. The city then said work on the park would begin this September.

The mayor now vows that construction will start next April and be completed by the fall of 2014.

Some prep work is set to begin within the next couple of weeks, Owens says. A tunnel that fed coal from the railroad tracks to Moran, passing beneath what is now the bike path, will soon be closed off, the CEDO chief reports. In addition, the defaced sculptural slabs of granite alongside Moran are to be moved to a site further north of the shuttered electricity generating station. That relocation is necessary in order for work on the skate park to get under way, Owens notes. Digging is also slated to start next month on a stormwater outflow pipe adjacent to Moran.

Rehab of the potholed and often-flooded section of the bike path near Moran is scheduled to begin a year from now, Weinberger says. There’s no timeline for completing that work, he adds.